Well, you might remember the proposed highway in Wisconson where a Federal Judge found big questions on traffic projections.

Over at City Observatory they've got news about another problematic set of traffic projections and a Federal Judge who has questions.

The situation is a little different. This involves a Transit Authority and ridership numbers, not a State Highway Department and car trips. But it's traffic all the same.


"[A]n agency need not supplement an EIS every time new information comes to light'...but rather only when "new information provides a seriously different picture of the environmental landscape..."

This is to avoid "arbitrary and capricious" revisions of an EIS.

So a question was, did the new information about ridership rise above the "arbitrary and capricious" standard.

It did! And the Judge rejected the Record of Decision. 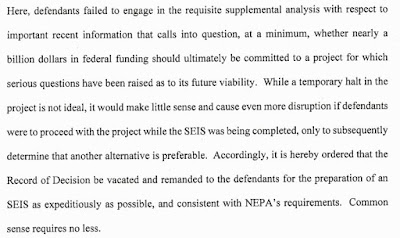 
...defendants fails to engage in the requisite supplemental analysis with respect to important recent information that calls into question, at a minimum, whether nearly a billion dollars...should ultimately be committed to a project for which serious questions have been raised as to its future viability. While a temporary halt in the project is not ideal, it would make little sense and cause even more disruption if defendants were to proceed with the project while the SEIS was being completed...Accordingly, it is hereby ordered that the Record of Decision be vacated and remanded to the defendants for the preparation of an SEIS...Common sense requires no less.

The case is being appealed - so who knows. But perhaps there is an increasing and consistent body of case law that we cannot commit hundreds of millions, even billions, of dollars on projects with badly outdated traffic projections based on assumptions we know are false at worst or very problematic at best. Though the decisions don't use these exact words, they seem to suggest that our colloquial sense of "best available information" needs to become our standard, that when a sufficiently large gap exists between old, outdated information and new information, we need to revised our analysis.

And the Salem River Crossing is nowhere near that standard of "best available."

As we consider the existing bridges and "The capacity of existing public facilities and services to serve areas already inside the UGB as well as areas proposed for addition to the UGB" (OAR 660-024-0060(8)(b)), even before we get to a Record of Decision, these Federal cases suggest that we need to revisit our traffic modeling and the assumptions behind it.
Posted by Salem Breakfast on Bikes at 8:15 AM