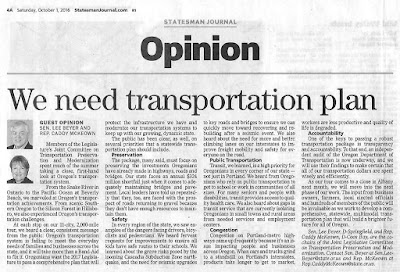 Probably in today's paper or online you saw the Op-Ed by Sen. Lee Beyer and Rep. Caddy McKeown on the prospects and need for a transportation package in the 2017 Legsislative session.

Mostly it's summary and inoffensive boilerplate, and yet there do appear to be some priorities or values instantiated in it.

It leads with "Preservation," with a statement for "Fix it First."


The package, many said, must focus on preserving the investments Oregonians have already made in highways, roads and bridges. Our state faces an annual $324 million shortfall just when it comes to adequately maintaining bridges and pavement. Local leaders have told us repeatedly that they, too, are faced with the prospect of roads returning to gravel because they don’t have enough resources to maintain them.


In every region of the state, we saw examples of the dangers facing drivers, bicyclists and pedestrians. We heard fervent requests for improvements to ensure all kids have safe routes to their schools. We learned about the grave risks posed by the looming Cascadia Subduction Zone earthquake, and the need for seismic upgrades to key roads and bridges to ensure we can quickly move toward recovering and rebuilding after a seismic event. We also heard about the need for more and better climbing lanes on our interstates to improve freight mobility and safety for everyone on the road.

Safe Routes to Schools and the prospect of earthquake came before freight mobility and highway safety.

This isn't a formal program or anything, so it's not wise to put to much weight on this, but the ordering here is nice to see.

Then comes "Transit." Of course we have great needs for better transit funding.

And in last place comes "Congestion." And when it is mentioned, it is "Portland" congestion, not statewide congestion. In the statewide perspective, Salem doesn't have very bad congestion!

And in fact, when we make investments in things like Safe Routes to Schools and better bike lanes and sidewalks and in better transit service, we are able to reduce congestion more effectively and more cheaply than when we try - and ultimately fail - to build our way out of congestion by more road widening or new roads.

So as far as these things go, the opinion piece seems like a reasonable statement of priorities. Interpreted literally - which, you know, may not be a safe thing to do - it doesn't leave room for follies like the Salem River Crossing. And hopefully that will remain true.
Posted by Salem Breakfast on Bikes at 11:00 AM