At the West Salem Redevelopment Advisory Board on Wednesday, the City presented an update on the concept for a crossing under Wallace Road along Second Street-Marine Drive. Next week it will be at the Neighborhood Association for more discussion.

In the WSRAB packet was the letter from the West Salem Neighborhood Association urging a pause, new study, and perhaps a reset. 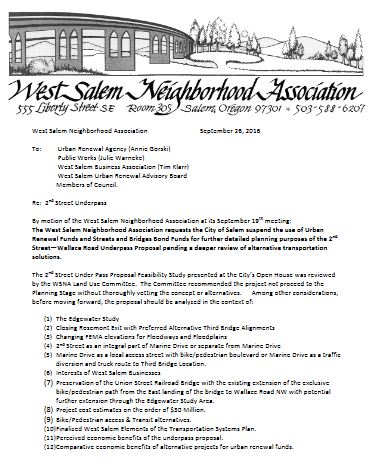 
The West Salem Neighborhood Association requests the City of Salem suspend the use of Urban Renewal Funds and Streets and Bridges Bond Funds for further detailed planning purposes of the 2nd Street—Wallace Road Underpass Proposal pending a deeper review of alternative transportation solutions.

The 2nd Street Under Pass Proposal Feasibility Study presented at the City’s Open House was reviewed by the WSNA Land Use Committee. The Committee recommended the project not proceed to the Planning Stage without thoroughly vetting the concept or alternatives.

It's hard to know how to read this and comment on it. There are lots of things going on.

First off, back in May 2014, the City published the baseline conditions for the transportation study. For a while it had a link on the project page, but it's been scrubbed. I get the urge to de-clutter, but the City should maintain accessible project archives. In any case, the url still works, so hopefully the City didn't mean also to delete it.

The subsequent study (for which the baseline memo was preliminary) was published, but I can't find that now. A summary of the findings was included in a slide deck in November 2014. (Honestly, I can't remember how it was presented, alas. WSRAB? An Open House? It's referenced here on the blog, anyway.)

There's been some other transportation analysis here and there. It's not currently collected in one place, though. Asking for "a deeper review of alternative transportation solutions," as if "vetting the concept or alternatives" hasn't been done, isn't quite right then.

It is a failure of the process that these objections from the West Salem Neighborhood Association were not raised two years ago in the winter and spring of 2015 after the first transportation analysis was published.

ODOT also continues to oppose any at-grade crossing on Wallace Road/OR-221 and, as we see very much in Portland right now, ODOT's jurisdiction over State Highways inside of city limits is a huge problem. ODOT throws up road block after road block to anything that impedes a full autoist firehose of cars. On foot or on bike? Too bad. Equally, of course, people complain about congestion and slowing at the bridgeheads. People say they want quieter streets with lower traffic, but they also want free-flowing traffic. At best these desires are in tension, and much of the time they are in outright contradiction.

In any event, on the one hand the City's probably not doing enough to reach out and solicit comment and criticism. Even though there's been more outreach to nearby businesses in the last year (you may remember some criticism at WSRAB about this a year ago), much of the way the City shapes outreach is designed to solicit (or impose) consent, and doesn't always share information and process that might instead lead to critique.

But on the other hand, this thing's been going for a couple of years now, there have been multiple open houses, and it's got to be really frustrating that it's only really registering now what all is involved for the concept. The critique and any reset would have more naturally fit in earlier stages of the study.

An important element in this dynamic is almost certainly the Salem River Crossing. Only now with the UGB Hearing are folks really grappling with the nature of Marine Drive and the way this proposed undercrossing along Second Street dovetails with the SRC and is not conceived independently of it. It is now the servant of the Third Bridge rather than a valuable public good on its own. This taints it a little or a lot depending on your perspective.

Still, even though the criticism seems late, much of it is trenchant. Here's more from the Glenn and Gibson Creeks Watershed Council:

This is only the beginning of the cost for this project. The staff reports do not provide estimates for the cost of maintaining the underpass: pumping to the ground water and flood water out of the road; repairs to the structure itself and repairs to the roadway. Over time, one can reasonable expect this cost to grow. This infrastructure is characterized as an asset but will also be a long term liability to be borne by the City's General Fund. If the City of Salem moves ahead with this project, revenue that goes to service it will mean something else will be neglected or left undone entirely....

According to staff, the construction will spare as many trees as possible. It is inevitable that some of this urban forest will be lost to construction and the alignment of the roadway. This really means the loss of all of the benefits that are provided by the urban forest at absolutely no cost to taxpayers. Benefits include stormwater capture, storage and filtration, beauty, habitat, clean air, clean water and mitigation of the urban heat island. Most of the trees are riparian corridor trees - doubly important in terms of habitat value. We not only lose these important benefits, but we add a road with heavy automobile traffic that will contribute significantly to noise, danger, increase in the urban heat island, air and water pollution and increased run off....

Character of 2nd Street was originally planned to be a small street at grade with a wide, leafy, landscaped walkway and bike pathway. The Edgewater District has always planned for a "Rails to Trails" approach to 2nd Street. Local residents that have served on the West Salem Urban Renewal Advisory board have long advocated a pedestrian friendly festival street that could be closed to accommodate Farmers Markets and local celebrations. 2nd St. NW is featured as a trail in the Park and Open Space Opportunities Map of the West Salem Neighborhood Plan. The Edgewater Plan envisions the historic Edgewater district as a walkable neighborhood friendly place. Wallace Road has always been planned as the automobile centered area.

The 2nd St. NW underpass is inconsistent with the West Salem Neighborhood Plan, the Edgewater Study, the Wallace Road Local Access and Circulation Plan. The grade separation and the wide, fully paved road with no median landscaping or trail like appearance makes for an automobile orientation and does not create a pedestrian friendly atmosphere. This is fine for Wallace road. It is already a busy, automobile oriented district. The historic Edgewater Neighborhood should be allowed to remain quiet and pedestrian friendly

An update and more conversation is on the neighborhood association meeting next week. 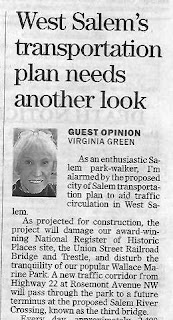 In the Sunday paper on the 13th, an advocate for historic preservation writes she's "alarmed," that part of the Union Street Railroad Bridge will be "amputated," and says:


Highways, like rail tracks, have small footprints, but create major environmental challenges. I regret this intrusion of traffic noise and pollution, believing the quiet beauty of Wallace Marine Park is valuable to our city and that the walkways and trails are restorative to individual well-being. I am also anxious because a National Register of Historic Places-designated property will be partially destroyed.

Neighborhoods are also becoming involved. The West Salem and Grant Neighborhood Associations have expressed concern about this $30 million project. If you agree, please encourage the City Council to reconsider altering the Union Street Railroad Bridge Trestle and creating a pass-through highway immediately adjacent to city parkland.

"much of the way the City shapes outreach is designed to solicit (or impose) consent, and doesn't always share information and process that might instead lead to critique." You have this spot on!

I spoke briefly to the chairs of WSNA and got the impression that they are taking this matter very seriously. They are new to the position, but are well qualified with work and life experiences that the former chair did not have. Thus, I believe the serious reconsideration of the underpass plan. I do not want to suggest that I can speak for them or the NA, but I must say that it is very true that the City and the WSRAB has not really reached out very well to the public. Open Houses are proven to be highly ineffective ways to reach most people in today's busy schedules. They are easy for the City to put on, but not easy for the public to attend. They are also designed more to sell their ideas, than to garner ideas from the public.

I plan to try to attend the next NA meeting and see how this progresses. I think that Marine Drive might still have some life in it, but I think enthusiasm for the bridge and the underpass is waining as reality sets in around the costs involved.

I agree that the pedestrian and bike connectivity needs to be seriously studied, but to be implemented it is going to have to be much less expensive. I like what is happening on 2nd Street and Edgewater, but getting across Wallace is the key. Next time I drive that area, I'm going to try to see what it might be like to bike or walk. My guess is that with the redevelopment of the order by Goodwill, we might have lost some opportunities to make things better for users other than those in cars.

Updated with an op-ed against the Marine Drive-Underpass combo.