Early next week there is a cluster of substantive policy discussion at all levels of local government!

In addition to the City Council meeting, which looks to have especially juicy matters in both the proposed Intergovernmental Agreement on the Salem River Crossing as well as discussion of ride-booking regulations, Cherriots and our Metropolitan Planning Organizations have meetings.

A couple of readers have mentioned that Cherriots meets on Monday the 24th in a "special meeting" for one topic only:
This subject is also an agenda item for the SKATS meeting on Tuesday the 25th. (There will be a separate post for the other agenda items at SKATS, which is our MPO.)

In the Cherriots packet is an April 13th letter from SKATS staff to MPO committee members:


Of particular relevance to SKATS is the proposal from Senator Boquist about a new excise tax on new vehicles sold in Oregon. The funds from the excise tax would go into a State Infrastructure Fund to be used for congestion/modernization projects in the Portland MPO area and other parts of the state. A 1% excise tax raised $73 million per year. Senator Boquist also supports establishing taxing districts for all MPOs in Oregon, to fund major congestion-relief projects. The Senator's idea is that the state-designated MPO area taxing districts - with an added fuel tax and/or vehicle registration in the district - could produce revenue in order that ODOT and MPOs share in the cost of major transportation projects....

This cost-sharing paradigm is moving forward in cooperation with the Portland Metro MPO area. The Portland MPO is willing to impose on themselves additional fuel taxes and registration fees to pay for half the cost of three major congestion projects (I-5 Rose Quarter, I-205, and Highway 217). The total cost of these three projects is about $1 billion, with Portland and the state each paying half....

In [staff] discussions with the Portland and Central Lane MPO transportation managers, they would like to have OMPOC [ie, a consensus from all Oregon MPOs] support for the MPO area taxing districts.

On the SKATS agenda is some additional clarification:


OMPOC (the Oregon MPO Consortium) will discuss this revenue district idea at their April 26, 2017 meeting. The Metro and Central Lane MPO Policy Boards have said they support MPO revenue districts for major projects.

Staff asks that the Policy Committee discuss their approval / disapproval / concerns about the revenue idea, so our SKATS OMPOC representatives (Cathy Clark and Robert Krebs) can share them at OMPOC.

The two leading local candidate projects for participation in this "cost-sharing paradigm," reproduced in the Cherriots packet, involve the bridges, unsurprisingly: 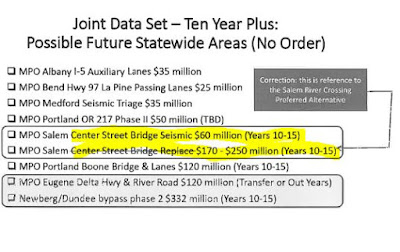 One thing to note: The strike-through on "Center Street Bridge Replace" and its correction "this is reference to the Salem River Crossing Preferred Alternative." (See last month's note here and the reference to the uncorrected slide.)

Also in the Cherriots packet is a bulleted list of "possible revenue options." You'll note the appearance of the bicycle excise tax concept here, as well. 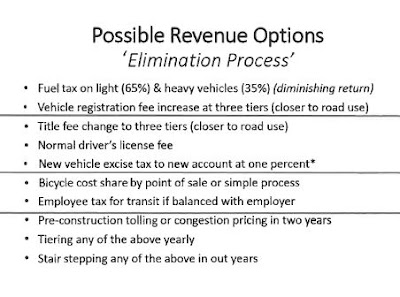 This is all very interesting, of course, and SKATS will want to get Cherriots on board, but it seems notable that there is no explicit discussion of transit funding here.

It's all about MOAR HIGHWAY!!!

Cherriots may have leverage here to ask for stronger support for transit and non-auto travel.

With this MPO Taxing District concept appears also to be a substantial institutional change, with MPOs shifting from being Federal creations to being state creations. This part is obscure and not treated in any detail, so it's hard to understand. But there could be some advantages to this. (See a little bit on that here and here.)

Finally, it's not clear if the MPO Taxing District would be able to impose the new revenue streams on its own or if it would be required to put them out for a vote on a ballot.

The debate and maneuvering will be something to watch.

The Salem Area Mass Transit District Board of Directors meets Monday, April 24th, at 5:00pm, in Courthouse Square, the Senator Hearing Room, 555 Court St NE.
Posted by Salem Breakfast on Bikes at 9:30 AM

"ODOT used to handle most of the engineering and oversight of new projects in-house. That changed in 2003, when Republicans in the Legislature mandated the department start contracting out in exchange for a funding package to build and retrofit bridges — a massive program that was sold as creating jobs.

Oregon is still paying for that short-term economic boost. The massive amount of bond funds spent on those and other projects now means that ODOT spends a staggering portion of its state highway fund revenue on debt service — more than $200 million a year. Because it is still paying off debts from past work, its ability to pay employees to oversee new work has become dangerously low.

A 2014 secretary of state audit found the situation to be dire."

The proposal to create MPO taxing districts is intended to allow local MPO's to help pay for big highway projects. However, according to the Governor's Transportation Vision Panel Report, except for needed congestion relief in Portland the highest priorities statewide are for maintenance of existing facilities, transit, seismic upgrades and bike/ped facilities. The MPO's would most likely rely on gas taxes for revenue. Gas taxes can only be used on highways. That addresses highway/bridge maintenance and seismic upgrades, but not transit or other modes. Rather than create a new way to raise funds for new highways, we need to find ways to fund the higher priority needs in Oregon.