Belluschi's YWCA of 1954 gets some Love 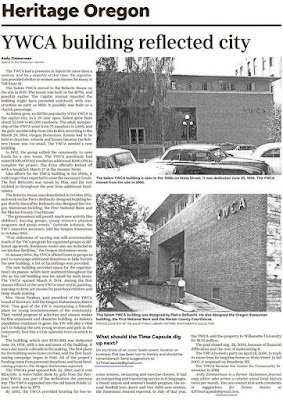 It's nice to see the old YWCA building get some love in the paper today! It is one of the remaining buildings designed by Pietro Belluschi, and to my eye, the finest of those remaining.

One new thing was a little more background on what the YWCA replaced:


The Salem YWCA moved to the Roberts House on the site in 1939. The house was built in the 1870s, and possibly earlier. The Capital Journal reported the building might have preceded statehood, with construction as early as 1858. It possibly was built as a church parsonage.

Even when we protest or lament current rounds of demolition, it is good to remember that many of the buildings we currently value as "historic" are themselves the second and third generation of building on a site. The Carnegie Library of 1912 also replaced a lovely old home. Cities are dynamic, and sometimes our presentist notions of the most recent history get in the way of understanding this.

On the Y, with the porch and porch detailing, it greets the street in ways that Belluschi's other buildings generally do not, and it is the warmest of his modernist boxes in Salem.

It takes its place in what could be the most charming block face in Salem: The Carnegie Library from 1912, the YWCA from 1954, the Telephone building from 1930, and Hallie Ford from the 1960s. Except for Hallie Ford, these have institutional, not public-facing uses, and this stretch of State Street is much less lively than it could be. But the building forms and different ways the entries mesh with the sidewalk give the block a source of untapped energy.

Last summer a reader pointed out that Willamette, who owns it, uses the Y for storage, so it is not wholly vacant, and that asbestos abatement looms costly and stands as a real barrier to reuse of the building.

As we periodically do, here's the list of Belluschi's remaining buildings to consider. The Statesman building is quite possibly the next to go. As a building, it is not very interesting, and we may not miss it, especially if there is a new and lively redevelopment there. But as they disappear, one by one, that seems like an argument to focus interest on the YWCA building.

(See also the old addition at Ladd & Bush, demolished long ago. It's possible there is one other of his that has been lost, but that has been difficult to nail down.)
Posted by Salem Breakfast on Bikes at 9:30 AM