She Walked Away from Omelas 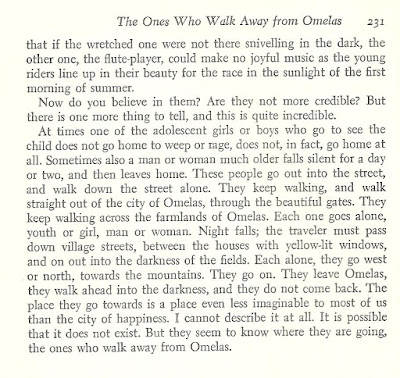 They keep walking, and walk straight out of the city of Omelas, through the beautiful gates. They keep walking across the farmlands of Omelas. Each one goes alone, youth or girl, man or woman. Night falls; the traveler must pass down village streets, between the houses with yellow-lit windows, and on out into the darkness of the fields. Each alone, they go west or north, towards the mountains. They go on. They leave Omelas, they walk ahead into the darkness, and they do not come back. The place they go towards is a place even less imaginable to most of us than the city of happiness. I cannot describe it at all. It is possible that it does not exist. But they seem to know where they are going, the ones who walk away from Omelas.

If aren't living under a rock, you'll know Ursula K. Le Guin died Monday. Her fans will already know this about Omelas, but others likely not: She memorialized Salem in one of her short stories, "The Ones Who Walk Away from Omelas."

It's quite indirect, not at all literal, but it's still a little barbed and back-handed, and also humorous. It is trivia rather than something meant as real critique. But it's there!

There will be many obituaries and appreciations for her. She was a literary giant - not merely a writer of speculative fiction, but a great writer period. Probably Oregon's greatest after it's all reckoned. Certainly she had a larger, wider oeuvre than Kesey, and she was someone who seriously could be talked about for a Nobel in some quarters. It's not at all difficult to imagine some of her books enduring and read a century from now, part of the canon.

If you haven't encountered her genius, consider doing so this year. It's never too late!

Here are the local clips...


Posted by Salem Breakfast on Bikes at 10:00 AM