Now that we are more than 50 years removed from "mid-century modern," which makes architecture formally eligible for listing on the National Register of Historic Places, and which marks the generational skip that brings things back into fashion, one of the interesting questions here is: What mid-century architecture do we need to think about celebrating and preserving? (More on that here and here.)

Over at the Mill, they recently posted a picture of one of the more interesting mid-century buildings in Salem.


The photo is identified as circa 1950, but it might be a little older. A commenter who works in the building posted:


The county records show the house was built in 1940. I have a framed document hanging in my office that suggests the house was patterned from a design on display at the New York World’s Fair in 1939. Someone penciled $15,000 on the document. I assume that is what it cost to build the house in 1939??

It looks like the photo may show the building at the tail end of construction, and if that's true, a date of circa 1940 might be more accurate.

It's also not clear how faithfully the building might have used the actual plans for "The House of Vistas." (See the Art Institute for the full brochure, which is not reproduced at the website.)

But even if the building is only "patterned," or adapted from, and not a straight up copy from the original plans, or if it has been modified and remodeled, it deserves more visibility in Salem. It is an interesting curiosity at the very least!

Late addition! Here's a photo that shows an earlier state of the house - like in the Mill's photo - before the second floor addition. So maybe the photo is from the 1950s. And the house definitely has been remodeled, perhaps too much so to make it eligible for any historical significance. Still, it's an intriguing story, and perhaps there will be more to say.

Second Addition: Here's a clip of the 1940 USGS topo map that shows the undeveloped nature of the neighborhood. The City limits were at Hoyt Street, so this was all unincorporated county land at that time. The photo viewpoint, just north of 12th & Fairview is indicated with the other arrow.

While we're on the topic of historic preservation, Elisabeth Walton Potter will be honored at the Chamber's "First Citizen" banquet for being "a champion for a more creative Salem." See the 2011 McMath Award citation for more on her legacy. 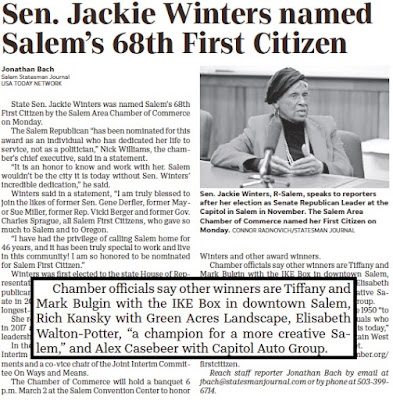 (Added another photo of the moderne house.)