Travel Feature on Salem in Popular Mechanics for January 1918

Maybe policy at the MPO's not so interesting for you. How about this lengthy piece in Popular Mechanics from 1918? Apparently they had a regular travel feature, and in January they wrote about Salem.

They seemed to be drawn, not surprisingly, to details on street construction and the role of forests, wood, and wood products. So it's not a comprehensive look, nor is it really very touristy. But it is interesting nonetheless.

The Capital Journal noted some errors and misunderstandings, and this response is at the end of the post. 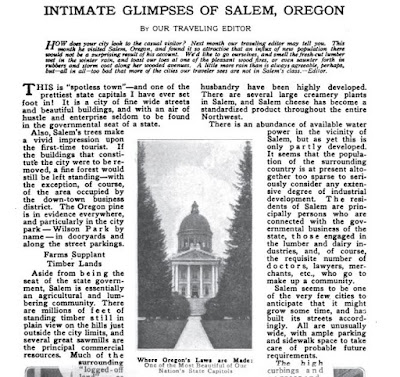 
HOW does your city look to the casual visitor? Next month our traveling editor may tell you. This month he visited Salem, Oregon, and found it so attractive that an influx of new population there would not be a surprising result of his account. We'd like to go ourselves, and smell the fresh-cut lumber wet in the winter rain, and toast our toes at one of the pleasant wood fires, or even saunter forth in rubbers and storm coat along her wooded avenues. A little more rain than is always agreeable, perhaps, but — all in all — too bad that more of the cities our traveler sees are not in Salem's class.—Editor.

THIS is "spotless town" — and one of the prettiest state capitals I have ever set foot in! It is a city of fine wide streets and beautiful buildings, and with an air of hustle and enterprise seldom to be found in the governmental seat of a state.

Also, Salem's trees make a vivid impression upon the first-time tourist. If the buildings that constitute the city were to be removed, a fine forest would still be left standing — with the exception, of course, of the area occupied by the down-town business district. The Oregon pine is in evidence everywhere, and particularly in the city park — Wilson Park by name — in dooryards and along the street parkings.

Aside from being the seat of the state government, Salem is essentially an agricultural and lumbering community. There are millions of feet of standing timber still in plain view on the hills just outside the city limits, and several great sawmills are the principal commercial resources. Much of the surrounding “logged-off land" — as the natives call it — has long since been turned over to agriculture, and here the various branches of dairy husbandry have been highly developed. There are several large creamery plants in Salem, and Salem cheese has become a standardized product throughout the entire Northwest.

There is an abundance of available water power in the vicinity of Salem, but as yet this is only partly developed. It seems that the population of the surrounding country is at present altogether too sparse to seriously consider any extensive degree of industrial development. The residents of Salem are principally persons who are connected with the governmental business of the state, those engaged in the lumber and dairy industries, and, of course, the requisite number of doctors, lawyers, merchants, etc., who go to make up a community.

Salem seems to be one of the very few cities to anticipate that it might grow some time, and has built its streets accordingly. All are unusually wide, with ample parking and sidewalk space to take care of probable future requirements.

The high curbings and correspondingly deep gutters of Salem are really a striking feature. When it rains there it simply comes down in buckets, and the fellow who gets under an umbrella to keep out of it is like the ostrich that sticks its head in the sand and thinks he is hidden from his enemies. Oilskins and rubber boots are said to be the only protection against rain in Oregon, which has been called the wettest wet and the driest dry state in the union. This has nothing to do with the liquor question, but it refers entirely to climatic conditions. Take a map of the state of Oregon, for instance, and note that the Cascade Mountains divide the state into eastern and western halves. The prevailing rain-bearing winds blow from the west and naturally they have to rise to a great height to get over the mountains. The result is that the moisture is condensed and precipitated on the western slope of the mountains. The western half of the state is therefore deluged with moisture while the eastern half is so arid and barren as to be scarcely inhabitable. The curbs of Salem are therefore ordinarily so high that one almost needs a stepladder to get up and down them. Also when they are running brimful during the winter rainy season some means of getting across them is quite essential. Long sloping concrete runways have been built to accomplish this.

Wilson Park — the principal city park (named in honor of its donor, not for the president) — is continuous with the grounds of the capitol. It occupies a swath of land several city blocks in width and nearly half a mile in length, right through the center of Salem.

The whole is a most excellent bit of landscape gardening, and with the state buildings form a scene not readily forgotten.

In Salem the fuel situation is not such a serious question as it is in the East. Nothing is so cheap or so plentiful as wood, and “slabs” are the universal fuel. Slabs are the sides and bark sawed from logs in the manufacture of lumber. Loads of slabs in lengths of six or eight feet are generally delivered in front of the door of a Salem residence. The delivery is followed by the wood saw — an institution said to be purely Oregonian. The wood saw is generally a motor truck or even a horse-drawn vehicle on which a small circular saw is mounted. The saw is usually driven by some sort of a gasoline engine, and is used to cut the slabs into convenient stove lengths. The wood, after being cut up, is delivered to the cellar or wood shed. Slabs sell in Salem for an average price of $3.50 per cord, sawed up and delivered. Maple stove wood is $5, and oak, which is considered by far the best fuel, $7 a cord.

A great deal of fruit is raised in the vicinity of Salem. Most of this is apples. There are also peaches, pears, cherries, and grapes, and this industry, while at present only starting, seems to be thriving so well that its future is assured. The inhabitants of this section of the state believe that with the passing of the lumber industry — which is but a matter of a comparatively short time — the production of fruit is the key to the future development of the state. I might write a book on how the forests of the great Northwest are being devastated, but will dismiss the subject by saying that if protective legislation is not very soon introduced Oregon's lumber industry will soon be in the same category with the bison, the passenger pigeon, the roller towel, and the public drinking cup. It will take 400 years of forest protection to rehabilitate the Oregon timber lands that are now stump-strewn wastes, and at the present rate of forest destruction the millions of feet of timber still standing will maintain the existing lumber industry for but a few brief years. Salem people realize this and are already seeking to develop the other industrial possibilities of the surrounding country.

The Capital Journal composed a response, mostly positive, but found several items over which to quibble, and a couple of them outright to reject.


Popular Mechanics for January has four pages devoted to Salem, two of these almost entirely to illustrations. The "traveling editor" who secured the views showed fine taste and the pictures are such as to make Salemites feel more and more proud of what the traveling editor aforesaid describes as a most beautiful capital city....He spoke of the "deep gutters required to carry off the tremendous rainfall which literally came down in bucketsfull." As a matter of fact so far as heavy rains are concerned it doesn't know how to rain in Oregon, where it takes six months of rainy season to precipitate the 40 inches of annual rainfall. He speaks of this being a great fruit section with apples as the principal fruit and this...is not at all, now, an apple section. He does not mention the prune of which 700 tons were sold a few days ago, or the loganberry, two of the leaders. He says the city is surrounded with logged off lands when it is surrounded by prairies and he draws a picture of Oregon's timber being exhausted in a few years, when the cutting of it has not yet actually commenced....He says too that Oregon's timber will soon be a thing of memory only, "like the bison, the passenger pigeon and the roller towel." As a matter of fact with Oregon's present milling facilities which this year will cut perhaps fifty million dollars worth of lumber, no effect is made on the supply, as the growth more than balances the cutting. There is more timber going to waste every year from becoming over ripe, and not being cut than is used by all the mills....Salem cheese is given a great boost, which was real nice of the descriptionist, especially as "there aint no such animal." It is really too bad the "traveling editor" did not run against someone that could have told him something about this the center of the greatest fruit products section of the world, for he was a friendly little cuss and patted us on the back to the best of his ability, and his camera pictures were true to life if his word pictures were not....He concludes his interesting article with the statement that he "could write a book on the devastation of the Oregon forests which have left the state a stump strewn wreck." Perhaps, but we earnestly appeal to his magazine not to permit him to invade this field of romance. Down in the depths of the Atlantic with the submarines and such, he will find a field better suited to his imagination.