Council meets on Monday, and in what is otherwise a minor matter for the acquisition of a strip of right-of-way along Portland Road, there is now the question of what to do about the flashing beacons we have been seeing at crosswalks.

Just before Christmas, the Federal Highway Administration withdrew permission for use of Rectangular Rapid Flashing Beacons. Currently we have some installed on Commercial Street at Bellevue by City Hall, on 12th Street at Mill, and on Court and State Streets by the Capitol. City Plans call for them at several new locations on forthcoming street projects.

One set of these future installations is on Portland Road.

So at this moment, the drawings the City is sharing on the matter of the ROW acquisition are obsolete, and it would be interesting to learn how the City plans to alter the crosswalk configurations. Presumably they will just "downgrade" the signs to eliminate the flasher, but crosswalk compliance by motorists is perennially difficult, and the flashing lights seems to help a great deal with the reminder to stop for people on foot.

(Just as a footnote, the acquisition is interesting because it has to be done by eminent domain. The parcel's owner went out of business, sold a smaller parcel to new owners, and now the strip effectively has no owner.. So the legal mechanism for the City to acquire an apparently ownerless parcel is by condemnation, though there seems to be no real opposing party contesting the issue or from whom the property is to be taken in an adversarial proceeding. It's a decidedly one-sided action here.) 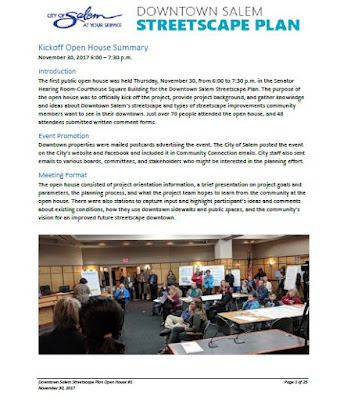 Council will receive as an information report the summary for the first Open House of the Downtown Streetscape Project. (See previous discussion of it here. Even though taming the car traffic is formally "out of scope," it is a persistent theme in the comments, and it may not be possible to improve the sidewalks very much if we don't also take action on the street configuration itself.)

In anticipation of the short 2018 Legislative session, the City has an initial slate of formal "Legislative Policy Statements." Maybe City staff and lobbyists know these will all be in play, but many of the topics seem more likely to be relevant in the odd-year full sessions.

In any case, there is a notable omission. Maybe this is a kind of confirmation bias, as it is unquestionably a central interest here on the blog, but there has been more pre-session chatter in the press about a Carbon scheme than about any other issue. And the City is silent on that here! That's a really striking gap. Especially if we are serious about a Climate/Environmental Action Plan arising out of the Strategic Planning Process, the City should formally support Legislation on Carbon pollution in very strong terms.

Behind St. Barbara's Cemetery and the old Post Office, there's this fascinating pocket of a strict streetgrid. It's almost like it was platted as an old townsite that never happened. The streets adjacent to it are curvy and transitional, approaching the loop-and-lollipop configuration of mid-century suburbs. There are several dead-ends and the street network is not very well connected to the grid, however.

In the middle of the area, there's a large undeveloped parcel, and Council will receive an informational report on a 38 lot subdivision for it. The development will provide a useful north-south connection along Doughton (and a connection with Felton), and otherwise seems on the surface to be helpful infill. Neighbors are concerned about the lack of sidewalks on Salem Heights, but the improved north-south connectivity will be a great boon for low-traffic alternatives to Liberty/Commercial. And one of the conditions of approval is half-street improvement on Salem Heights to current "collector standards." It's hard to agree with the objections about traffic.
In an action to vacate the alley running north-south up the middle of the the Police Station site, there is the latest site plan concept. A few details are new or worth a comment:
If you compare this updated site plan with renderings from the bond campaign, you'll see how the public plaza space is reduced and less ambitious, and rotated 90 degrees. This revision is not surprising!

Bullets for the rest:
Update, Wednesday the 10th

Some notes from the meeting itself and commentary on it by others...

The West Salem Neighborhood Association is not happy with the way the City evaluates transportation impacts from new development proposals. At Council they circulated a letter of request.
From the letter:


The West Salem Neighborhood Association and its Land Use Committee requests to hold a meeting where Public Works traffic engineers, city planners, a deputy city attorney, and the West Salem Neighborhood Association can discuss the current processes and procedures taken by staff when considering applications, with regard to statewide planning goal12 and transportation systems planning rule OAR 660-012-0060.

Goal: Specifically, we wish for common understanding and agreement on interpretation and application of OAR 660-012-0060. We would like staff reports to include more language and detail substantiating that the evaluation work has been done according to that common understanding and that applications do meet the provisions. It is our intent to resolve these disagreements and misunderstandings in an amicable and productive way. Please help us resolve this conflict at the lowest level, and avoid unnecessary escalation.

There are lots of interesting things going on here!

This group staged a hostile take-over of WSNA, so there is more than a little irony here.

As a pro-SRC group, they also benefited from the City's wacky interpretations of OAR 660, so it is a bit unseemly now for them to protest the way the City interprets the rules.

On the other hand, perhaps there is now some common ground between pro- and anti-SRC advocates in the way together they both find that the City may flout "plain language" interpretations of Goal 12 and of provisions in OAR 660.

On downtown streets, over at SCV they note:


At [Monday's] City Council meeting Councilor McCoid asked what might be done to calm traffic in our downtown and got what you might find to be a surprisingly hopeful answer from our Public Works Director. According to him almost anything is possible on streets other than the five "workhorse" streets downtown: Liberty, Commercial, Center, Marion and Front.

Maybe there is new interest in accelerating or improving the implementation of the Downtown Mobility Study. But it remains a problem that the Liberty/Commercial couplet with more lanes than I-5 continues to be exempted.

On Greenhouse Gases, from the City's own summary of the meeting on Legislative Policy Statements:


Council approved policy Legislative Policy Statements for 2018 with the following addition “Establishing ongoing, comprehensive and robust program partnerships and commitments to the support of reduction of greenhouse gas emissions in our community.”

That's not a specific endorsement of the Clean Energy Jobs bill, but it's a step in the right direction!

Updated with some comments on the Monday meeting