On Monday Tuesday! Council meets for a formal Work Session on the Strategic Planning Process. 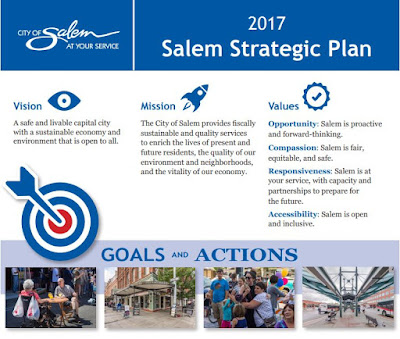 The Plan really is still in early stages, and it may not be very useful to criticize or to praise it too closely yet.  So I'm not sure what is the right amount of comment. You will see other angles for comment. There's a lot of information to try to coordinate, and the Staff Reports still are mostly written as discrete pieces, not always or necessarily placed in the context of the whole. Council will need to come to some kind of synoptic view, but for the process to be most successful, that holisim will need filter down and inform basic reporting and analysis more fully. There may be some internal culture changes and anti-siloing that needs to happen farther down in the org chart. (It would be interesting to learn more about any internal debate or criticism of the process. Does Staff fully embrace the concept?)

Because of our interests here, maybe you will say this is cherry-picking, but it is interesting to note that the updates that involve transportation and Public Works are among the least detailed.

It is possible that, for example, the choice to continue work and staff time on the SRC means that the City is slighting work for the Public Transit Committee. The Public Transit update is utterly empty. Anything meaningful is deferred to a future presentation to Council.

So is this an indirect result of continuing work on the SRC? Hard to say, but it's certainly possible.

At any rate, when things are finally presented, we will know how serious they are by the amount of attention given to our mania for subsidized, free parking everywhere. One of the biggest ways the City can support public transit is by having a robust and critical conversation about our subsidized parking policy - free curbside parking and off-street parking minimums. When we incent drive-alone trips so strongly with subsidized free parking, it is no surprise that our transit suffers.

The Critical Infrastructure update isn't very informative either, and in its discussion of prioritizing, it does not make explicit reference to incorporating or coordinating with the Priority-Based Budgeting proposal under the Sustainable Services update. Does that mean Public Works envisions a separate, siloed priority list or process? Maybe it's not necessary that they be linked, but it is at least worth noting that they are not explicitly linked right now.

Maybe this is all just a coincidence, but you have to ask: If we just shifted staffing from the SRC to these other two projects, how much better would they be?

By contrast, the Environmental Action/Greenhouse Gas update contains a fleshed out proposal with many details and discussion. It recommends starting with a Greenhouse Gas Inventory. On the other hand, it's ambitious and appears to require new City Staff and a Consultant, so where it falls in the total budget priorities is an open question. Maybe it's a kind of straw man that will be knocked down when the budget to actually do it "can't be found" or deemed "too expensive."

The Vision for Growth and Development update is vague. 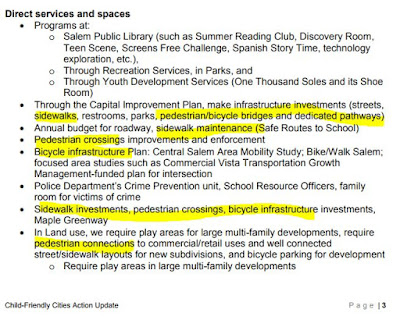 The Child-friendly update has lots of talk about walking and biking. However, it pulls back, saying:


No additional action is recommended at this time. Staff will continue existing City polices, programs and practices, which meet the broad intent of the UNICEF framework. If more activity or collaboration with partners in this arena is desired, a shift in responsibilities of existing staff from current priorities would be required, reducing available staff time and resources for other initiatives.

One of the supporting reports is a survey that parallels one done a year ago. It is written fully by an outside consultant.

These surveys are difficult to assess for many reasons. Here are the charts from 2017 and 2016 on the "most important issue."

You'll notice that they aren't exactly parallel with the same terms. There's also no error bar or confidence interval, so we don't know what is a statistically significant change.

It is difficult to be very confident that there is any meaningful change in aggregate sentiment here.

How Difficult is Walking and Biking?


Clustering walking and biking together in "how difficult is it to walk or bike?" discloses little useful information. I find it much easier and more comfortable to walk in Salem than bike in Salem. There's a real difference. And merely asking like this doesn't pull out "do you actually walk or bike in Salem?" and in casual conversation people who only drive will routinely point to bike lanes or paths and say "of course it's easy to bike in Salem." But they don't actually have an informed opinion. Here there is no attempt to discern informed from uninformed opinion.

But, again, this may actually be more of an index for margin of error and normal vicissitudes from sample size than any expression of a structural change in sentiment.

The terms for locating apartments were not carried over from 2016, and so it is difficult to make a comparison. 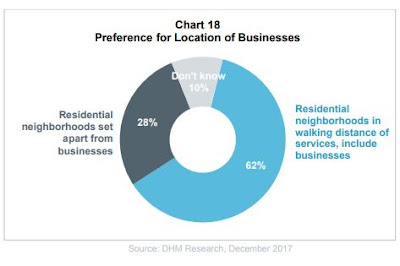 We need to talk more about the costs of mandating large off-street parking areas. So many of these preferences that might be disclosed in a survey like this are contextless - again the informed/uninformed dynamic - and they should instead be presented in a context of costs and trade-offs. If the question were asked in tandem with the information about how much rents are increased by parking - or how much lower rents might be without the parking - the answer might be different. 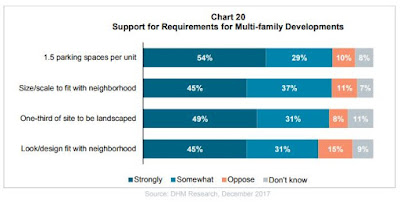 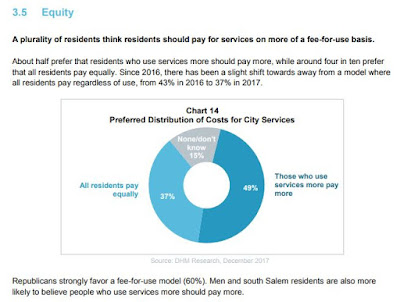 Painting the topic in such broad strokes may not be very helpful. Because of course "user pays" is strenuously contested when it is things like parking or constrained street access on our bridges. No, these must be broadly subsidized by everyone. But amenities like the Library or Parks? "User fees!"

Instead we should ask, which things are overused and need more pricing signals; and which things are public goods that are not yet overused, are maybe even underused, and which therefore do not need pricing and instead might need more support? What are our policy goals, and is pricing a useful tool to accomplish one or more of them? If we are serious about those policy goals, the proper criteria will not always be popular/unpopular, and leaning into a popularity contest as the primary way to structure the Strategic Plan will distort it mightily, and likely cause it to fail. (Things that are valuable aren't always easy or convenient!)