Grant and Bush, Transit and Cars, Cap and Invest - Newsbits

I'm not exactly sure what the right standard is here. Most of the time the paper's history columns are informal, chatty, fun, and not something to fuss over. But this story about a juicy scandal at Ladd & Bush bank seems half-baked. It's a tricky narrative, and probably needed a much longer word count. Maybe editing whacked it down too much. Whatever the reason, it flattens out too many elements in the story and is hard to follow. 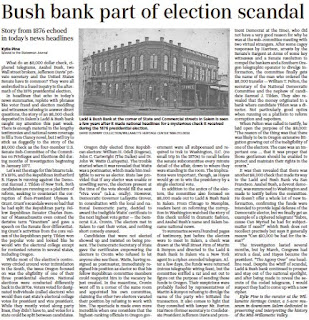 First off, it's time for a more nuanced sense of President Grant.


Let’s set the stage for this bizarre tale. It’s 1876, and the Republican Rutherford B. Hayes is running against the Democrat Samuel J. Tilden of New York. Both candidates are running on a platform of reform, seeking to counteract the corruption of then-President Ulysess S. Grant. Grant’s scandals were so bad that he had split the Republican party. Fellow Republican Senator Charles Sumner of Massachusetts even coined the derisive term “Grantism” and gave a speech on the Senate floor differentiating Grant’s activities from the core values of the Republican party.

Just a reminder: Under Grant in 1870 the Department of Justice was created, he signed the anti-KKK Enforcement Acts, and the 15th Amendment on voting rights ratified.

While stories about corruption are relevant and rhyme in some ways with our current politics, it's also relevant that President Grant created some of the first law enforcement and civil rights protections against a virulent and racist strand of domestic terrorism. And at our particular moment in history, these parallels - well, more like inversions and reversals - may be more important than the corruption in his administration. The idea of Grant as merely a bumbling dummy is part of the "Lost Cause" ideology of Confederate apologetics and the associated "Dunning School" of historiography. It's time for our public institutions of history to face this more squarely and to express a more balanced evaluation of Grant. He was far from perfect, but he also had some real greatness. (There's even a shiny new biography from Hamilton author Ron Chernow.)

Anyway, the meat of the scandal, which involved a mysterious payment and disputed Presidential Electors:


[J]ust before the electors were to meet in Salem, a check was drawn at the Wall Street Firm of Martin & Runyon and directed to the Ladd & Bush Bank in Salem via a New York agent in a cipher-encoded telegram. After a few days, the funds were returned (minus telegraphic wiring fees)...

“The reason of the thing was that there was likely to be in Oregon extensive litigation growing out of the ineligibility of one of the electors. The case was an important one ... that it was proper that those gentlemen should be enabled to protect and maintain their rights in the courts.” [said William T. Pelton, the secretary of the National Democratic Committee and the nephew of candidate Samuel J. Tilden.]

Salem badly needs a real history of Ladd & Bush bank and of Asahel Bush's financial activities in Salem. In that we would learn a great deal about local politics and the development patterns of the city. But it sometimes it feels like we are too committed to a hagiography of Bush and institutions associated with him. This piece also short-changes us because in the attempt to make history relevant right now, it leans too much into mining scandal as comic infotainment and does not do enough to place and interpret the scandal better in the full context of Salem history.

(Like I said, it needed more space and more words. This is an excellent candidate for a substantially revised and enlarged version to be published on the Mill's website!)

In a funny Register-Guard note about selling the house of former UO football Coach Willie Taggart, while recounting the chain of ownership it listed a former Lane Transit District GM.

That was several years ago, but it raises an interesting question. At least on the current LTD route system, this house is served by route 96, which runs only hourly at rush hour, not at mid-day at all, and requires a walk of several blocks.  So while it is theoretically possible to ride the bus to the house, it's not really very practical.

There is a strand of Portland criticism of Trimet that returns over and over to the idea that none of Trimet's upper management actually ride the bus and are therefore out-of-touch with the daily realities and needs of transit (especially bus transit as distinct from light rail).

This house in Eugene looks like it would belong also to a person who doesn't ride the bus much at all and who does not have much of a personal interest in transit-oriented development patterns or the wider urban forms that are conducive to transit.

The house is an autoist McMansion!

Is this a thing in transit management, that they do not really embrace the product they are in charge of managing? (So far the Cherriots "It's my Ride" series of profiles does not include high level executives or any Cherriots management.)

And taking the fact that Oregon is "small fry" too literally, there's a bizarre argument against the Cap and Invest concept that we will likely see in the Legislative short session this year. By its logic, each of us could wipe out our personal emissions entirely and still not make a dent in global emissions - and therefore we should do nothing. It is patently absurd.


It functions as a tax on anybody who uses electricity, natural gas, and transportation fuel, increasing energy and fuel costs and diverting resources we need to continue investments in reducing carbon, grow valuable jobs and successfully run food companies across the state.

The argument that it will "divert resources...[for] investments in reducing carbon, grow[ing] valuable jobs" is essentially all wrong. Taxing carbon offers pricing signals and market-oriented nudges to invest in better alternatives. The taxes would be invested in clean energy development and clean energy jobs.

Rhetorically the piece seems to trade also on the idea that we would be importing some objectionable ideas from California, and nobody wants those awful Californicating things here, right?

In any case, as an emotional appeal this should not be effective - hopefully. But as a piece of sober analysis, if this is the best of the kind of thinking opponents can do against the Legislation, it ought to be a slam dunk for passage.
Posted by Salem Breakfast on Bikes at 3:30 PM