City Council, May 23rd - Where to put New Housing?

So where will they live? And how close will they be to jobs and groceries? Will the new neighborhoods be walkable or auto-dependent? 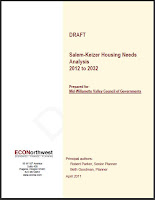 Almost buried as a 5:30pm work session before the May 9th Council meeting was a presentation on the Salem-Keizer Housing Needs Analysis (187pp, 4mb here).

This Monday the City wishes to decide how to go out to the public for further comment and advice on next steps.

The Needs Analysis claims that Salem has a large surplus of land for new single-family homes, but a significant deficit of land zoned for multi-family housing. Keizer, it claims, has a deficit in every category.

The method, though, driven informally by convention and formally by the Comprehensive Plan, still focuses on building "out" on vacant land rather than building "up" on redeveloped land. That is, it has a suburban focus. Transportation costs in distance, time, and fuel are not a large factor in analysis.*

So perhaps it is not surprising that the preferred option for outreach on the Needs Analysis also doesn't appear to factor transportation as a significant input in housing decisions.

The Staff has identified potential stakeholders who could be included in the review committee:
a. Marion and Polk Counties Homebuilders Association
b. Salem Association of Realtors
c. A neighborhood association chair or land use chair
d. Salem-Keizer Community Development Corporation
e. Social Services Agencies involved with community housing needs

There is evidence that the costs of transportation may be increasingly important. A Coldwell Banker survey of agents recently concluded

The high cost of gasoline is not just emptying wallets; it is also impacting where consumers choose to buy a home. According to a new Coldwell Banker survey among its network of real estate professionals, 75 percent said that the recent spike in gas prices has influenced their clients’ decisions on where to live, and 93 percent said if gas prices continue to rise, more home buyers will choose to live somewhere that allows for a closer commute to their work.

Coincidentally, also at Council there is an informational report on a new development on the very southern edge of the city and urban growth boundary.

The development would be south of Davis between Liberty and Skyline. The locator map here (not part of the Council report) is based on the draft bicycle plan for south Salem. The permit calls for a road built to current standards to align with Mildred - a three lane collector with bike lanes and sidewalks. It also calls for linking streets, hopefully to avoid the disconnected loop-and-lollipop streets characteristic of the development immediately to the north of Davis. North-south movement through this part of town appears to be problematic by design. This makes the proposed bikeway at Red Leaf even more important.

As fuel and carbon become increasingly costly, residential development on the periphery may no longer be preferred, however. Instead of centrifugal development it seems likely we will see a return to centripetal patterns.

The housing analysis should also take this into account.

Also on the docket is an update on the Central Salem Mobility Study and a first reading for a proposed ban on smoking in parks.

* There is a discussion of 2008 census data and the relationship of jobs to homes. The data is a little coarse, using the Salem Metropolitan Statistical Area, which is the whole of Marion and Polk counties. City-level would be more useful here. The amount of out-of-region movement is large. About 1/3 of those who live in Marion and Polk counties work outside the counties; equally, about 1/3 of those who work in Marion or Polk county live outside of either county. This may merit another discussion.
Posted by Salem Breakfast on Bikes at 7:00 AM

Here's a summary page for the National Association of Realtors surveys on "smart growth" and "community preferences."

"The survey reveals that most Americans would like to live in walkable communities where shops, restaurants, and local business are within an easy walk from their homes, as long as those communities can provide detached single-family homes. The survey also shows that most Americans would choose a smaller home and smaller lot if it would keep their commute time to 20 minutes or less."