Is a drive-up window appropriate for an historic district? That's the question the Planning Commission will moot tonight.

The corner of State and Commercial is an important one in Salem. Ladd & Bush bank is there, and kitty-corner is the Pioneer Trust bank. Historically there's a center of gravity there for banking.

A third bank is interested in the gravel lot on the southwest corner of the intersection. Because the lot is in an historic district, the bank would like a special exemption to put in a drive-through teller window.

State street is also an important gateway to the Carousel and to Riverfront Park. The Downtown Advisory Board Strategic Action Plan has identified State street as an important east-west connection (the park-to-park link to the Capitol in purple). 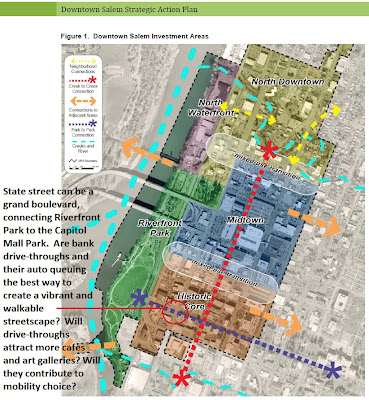 Tonight the Planning Commission will hold a hearing on the question, and decide whether to recommend that City Council look at an ordinance to permit new drive-up windows in the downtown historic district.

The staff report indicates that

prohibiting drive-throughs can be a way to promote pedestrian-oriented development.

It also notes that

The Historic Landmarks Commission discussed the proposal last month and expressed concern that the ordinance might encourage demolition for more drive-throughs. But they did not oppose it. 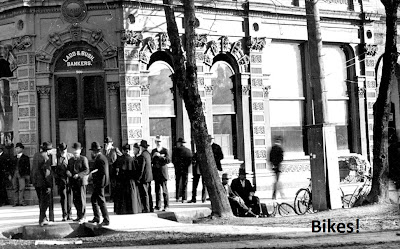 That's too bad. The historic character of the corner essentially predates the automobile! This image is dated 1891.

Moreover, drive-throughs wouldn't seem to offer a multiplier effect for downtown business. Bank customers using drive-throughs may not be staying downtown to conduct other business, and it's not clear they create additional business for other merchants. Bank customers in a walkable environment are, however, likely to patronize other nearby businesses.

Nevertheless, the staff report recommends moving ahead with an exemption that would permit drive-throughs in the downtown historic district.

It's terrible to have such prime downtown lot be vacant, of course, but here again the City is missing an opportunity to make pro-walk and bike decisions, and instead is poised to retreat and promote more auto-oriented development downtown. State street here should be a grand and walkable entry to the park, not a queue of idling cars for the bank drive-in.

Write Lisa Anderson-Ogilvie with your concerns!
Posted by Salem Breakfast on Bikes at 7:00 AM

"The majority consensus was to not recommend the amendment as there was a need for further research since existing drive-throughs are not being fully used; that a successeful business could create potential safety problem cars queuing; that it could encourage tear-downs, as seen with the Tahiti Bar building for the Bank of the Cascades; and that it should not be limited to banks and credit unions. However, should the amendment go forward, the HLC would like a review role."

The Planning Commission Staff report under "facts and findings" may understate the HLC position, as it uses "concern" rather than "oppose."

It's interesting that the HLC does not also get to have a hearing over its own ordinances! This is interesting.