At Friday's Sustainable Cities End of Year Celebration, the parlor-game of choice was to guess which projects would get done. After the deserved celebration and huzzahs, what would be the next steps?

Some projects were clearly more conceptual, visionary, or far-out than others. Other projects seemed they might directly inform actual policy-making and decisions. 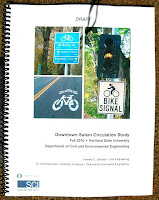 In several cases, the connections were obvious, and with yesterday' piece by Beth Casper in the SJ was the schedule of City Council work sessions to discuss the projects. Two projects are on Monday's City Council agenda, in fact.

At the celebration penultimate drafts of several final reports were out on a table, available for browsing. Once the reports go through final review, they will be published and available for closer reading.

The Downtown Salem Circulation Study will be of particular interest once it's released! Even on the cover you can see a bike focus - wouldn't that be great to keep? But it might not be surprising to see in the final version a different set of images. Regardless of the cover, several of its component analyses inside are reappearing in the Central Salem Mobility Study. (More here.)

Another study that has clear and direct links is the street light project.

One group of students identified the different needs and lighting zones for people on foot, on bike, and in car.

This design for a proposed light fixture looks like a bike helmet! But it's called the Viper.

As part of the study, the City is looking to identify a different revenue stream for street lights.

Streetlighting is paid 100% with gas tax funds. The City’s electric bill for street lights is currently covered by $1.2M of gas tax revenues. Public Works wants to move this funding off of gas tax to another revenue stream. If the source of funding was different, gas tax revenues could be freed up for other projects and less General Fund money would be needed to support street maintenance.

Wouldn't it be great to be able to spend more on maintaining existing capacity and using it more wisely - wouldn't that be more sustainable! - than expanding capacity? 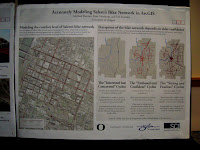 There were also plenty of other posters to look at around the room. This one represented a GIS project to map Salem's bikeway system for different skill and interest levels. The three snapshots showed clearly the ways the existing system, constructed mainly out of bike lanes on busy roads, had limited appeal.

In June and July, at Council work sessions the City will discuss the projects:The spring term bike class will also present on June 10th.

How far the City actually goes to implement any of the recommendations is another question, and current policies do not always make it easy to see the line from talk to walk.

But in important ways the past doesn't matter. Council will implement as much of the recommendations and projects as they think they public wants. So if you want things done sustainably, let 'em know!
Posted by Salem Breakfast on Bikes at 6:00 PM