ODOT announced yesterday that of seven area Transportation Enhancement grant applications, the greater Salem area won one, an award for the Delaney Road project in Turner. ODOT awarded no project within Salem proper.

From the ODOT release:

SALEM – The Oregon Transportation Commission approved $15.9 million in Transpor­tation Enhancement funding for 14 new projects throughout Oregon. The projects, selected from 100 applications requesting almost $107 million, will become part of Oregon’s Statewide Transportation Improvement Program and will be scheduled for construction in 2013 and 2014. The Commission also approved four projects for the reserve list. These projects remain eligible for funding, subject to Commission approval and available funds. 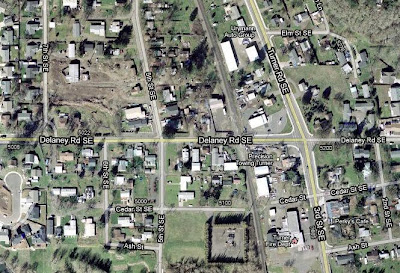 The total Delaney project cost is $1,092,000 and the grant was for $905,000. It will build sidewalks, and 5-foot bikelanes, and widen the traffic lanes to 12 feet on Delaney between 3rd and 7th streets. Existing conditions are a 2 foot shoulder and 11 foot traffic lane.

For more on the previous rounds, see here and here.
Posted by Salem Breakfast on Bikes at 6:45 AM