What are you doing for National Bike Month?

Here's a smattering of variously relevant newsbits from around the city and state...

One big newsitem in Oregon is that Sisters was just announced as a Silver-rated Bicycle Friendly Community.

On Thursday, Bike League President Andy Clark will be in Eugene to honor the University of Oregon's recent designation as a Silver-rated Bicycle Friendly University.

Got the gift of gab? Salem needs a Bike Show on KMUZ!

Supporters will be at City Hall on Wednesday night for the Budget Meeting to ask for support from the City.

If you value community radio, and especially if you'd like to host a bike show (see the KBOO version!), think about showing your support. 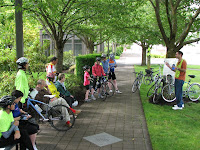 On Saturday, May 7th, here in Salem, Gary Obery will lead the season's first Intro to Smart Cycling Clinic. (Look for more later in the week!) 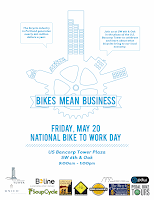 On May 20th in Portland, people will celebrate the ways bicycling is good for business and the economy.

This is especially interesting, because we in Salem haven't always done as good a job as we might in talking about the benefits of bicycling for business.

It's not too late to organize or announce events here in town! Do you know of anything else going on? Does your business have a Bike to Work Day event planned?
Posted by Salem Breakfast on Bikes at 7:00 AM