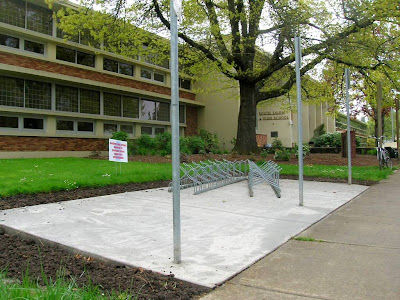 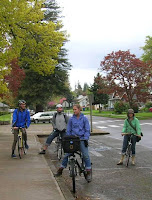 Several students from the Sustainable Cities Initiative came to town over the weekend to gather information for Salem area bicycling projects.

A few from Salem joined the group and we all biked around West Salem, downtown, and inner South Salem looking at problems and potential. Jeff brought mini-posters of the draft concept maps from the bike plan update.

Going down Church Street we found the new bike racks at South Salem High School. Teacher and bike commuter Dottie Knecht says they were brand new, and installed on Friday. She wanted to thank Santiam Bicycle for a grant that enabled them to complete the concrete pad and installation!

Students in the Environment Club, Bike Club, and Woods Class have been working at least since February and students look forward in the fall to finishing up the landscaping with native plants that don't need lots of water. 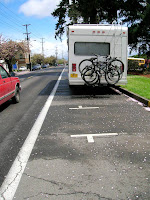 Later on the group biked down Edgewater and found this RV effectively blocking the bike lane. The Edgewater bikelanes are striped so close to the door zone that any vehicle of greater than normal width will force people on bike into the auto travel lane. (They even have bikes on back!)

The ride was a good mix of the good and the bad and the potential.

It'll be great to see all the concepts and completed projects in a few weeks.
Posted by Salem Breakfast on Bikes at 7:00 AM