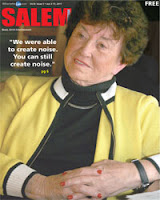 In this week's Salem Weekly there's an interesting piece on Britta Franz.

In it she talks quite about about mobility and transportation, especially about access to Riverfront Park and the prospects for a streetcar.


Franz served on a committee in the late 90s to investigate access to Riverfront Park. The mayor at the time called her and said that there was a debate on whether a bridge or a tunnel should be built to access the park. After she worked, personally, with an architect on the issue, the definitive answer was neither. Many access points were necessary and there was no need to "funnel" park visitors.
...
She says that the [downtown mobility] study is too broad and early drafts of the study included outdated maps and verbiage that would bring back the debate on a tunnel to access Riverfront Park. She's alarmed over the issue rearing its head again and contacted City of Salem staff and the Downtown Advisory Board about the wording of the study. A draft from May 23 shows that the text has changed, and the map has been updated.

The study's language did change slightly from March to May, but it's not clear how significant this is. Still, it is interesting to hear of a study that focused not so much on the safety or engineering of an undercrossing, but on the argument against "efficiency" and "funneling."

She also talks about the recent history of interest in a streetcar.


She was also heavily involved in two different streetcar studies. She says that if the project hadn't been derailed by an outside consultant who increased the price two-fold, a streetcar would be on downtown streets today.

"I don't know whether they were sincere, stupid, or if someone, somewhere didn't want it to happen - didn't want us to even try it. I'm on a new committee to do it again, but we haven't met yet," she says. Having a viable streetcar is on the list of goals provided in Salem's Vision 2020 plan.

Franz still supports it. "It would add tremendously to the value of the property. With streetcars people know that they are coming and it adds to the viability and the financial assets of the center of the city," Franz says.

People and advocates in Salem often get burned out, it seems, and the information about studies and politics from just a decade or two ago are often easily lost. Too often we recapitulate or revisit inefficiently old debates. So go read the piece! It's good to know more about old conclusions and debates!
Posted by Salem Breakfast on Bikes at 12:01 PM

How wonderful a streetcar would have been! Maybe in the future. We really need to think forward, not rely on an outdated system of transportation. What is needed is courage and vision.