Roots and Racing on the First Weekend of Summer

Where'd the sun go? The rain makes me think even more fondly of the weekend just past. 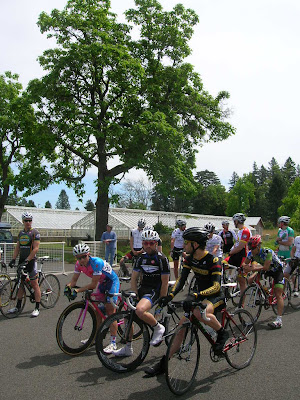 It was all about trees and sun. It sounds corny, but racing on Sunday at Pringle Creek Community almost seemed more about building roots and being rooted than about the competition.

You might say I came for the races, but I lingered thinking about the roots.

The trees, the riparian vegetation, the gardens, and the community of racers and residents together made for a surprisingly bucolic scene. The graceful way the built and natural environments are knit together was more impressive than ever before. It was calm for a race - not soporific, but a little zen, even-keeled. The racers probably didn't feel this way, but for a spectator, it was surprisingly relaxing. 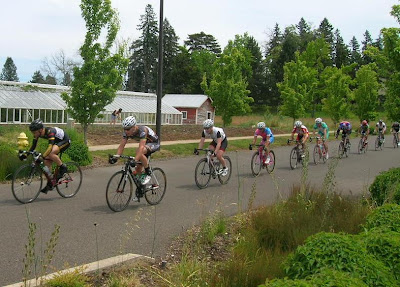 While the pros zoomed around the circuit, community gardeners weeded and raked. (You can also see the greenhouses in the background.) 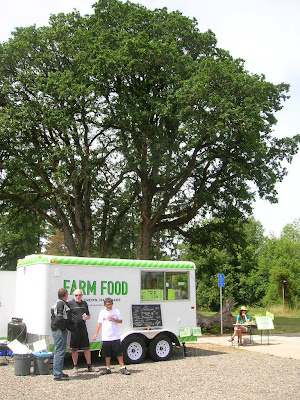 Minto Island Growers brought the food cart, cooking super locally. I missed the lunch rush, but much of the day they were slammed! The cafe at Painter's Hall was also open.

On the village green a volleyball net welcomed famlies. At the finish line, the Downtown Waffle Cart offered grainy goodness.

Race organizers had done a great job of sprinkling amenities around the course. But it wasn't just clever merchandising and marketing. It felt like an event uniquely Salem, something completely unlike anything in Portland or elsewhere around the State. Next year you won't want to miss it!

Race director Kurt also shared news of the new website for the Northwest Tandem Rally in 2012, which will be held here in Salem next summer. A thousand tandem enthusiasts here for the weekend! 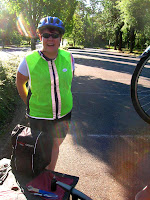 Earlier, on Friday, City Councilor Laura Tesler joined us for breakfast at Mission & Winter. With the sun shining luminously through the still-new green leaves, it was a glorious way to start the weekend.

I like to see people out walking. I like the “mom and pop” store open and people sitting outside eating and socializing. I once rode by a neighbor carrying a covered dish of food up a walkway to another neighbor’s house. I rode by a group of neighbors talking in front of their houses and on another occasion, one neighbor helping another fix a car problem. I see people out weeding, planting, painting and having a backyard BBQ. It’s everything that makes a neighborhood a community.

Curt from KMUZ also joined us and talked about community radio. I think he'll be back next month!

At the races and breakfast and everywhere else, it was all about connections and roots. Is there really a better argument for biking? 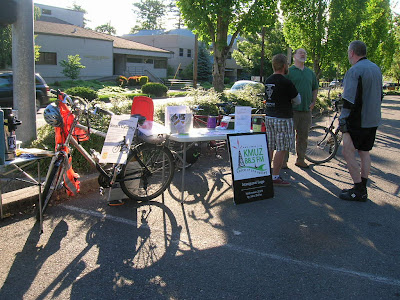 Email ThisBlogThis!Share to TwitterShare to FacebookShare to Pinterest
Labels: Breakfast, Other Bike Fun