Dumpster Diving at the Speed of Bike at Hallie Ford 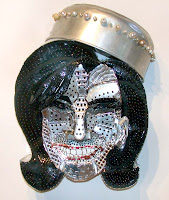 She's also got a fertile and inventive show at the Hallie Ford Museum of Art this month.

You'll see icons like Jackie O and more than a few nods to Jasper Johns. It's folk art and found object, sometimes whimsical confection, other times barbed with commentary on slavery and tragedy. The works surf over American history from colonial folk art to Walt Disney.

The aesthetic can be a little scuzzy, but it's also heavily worked. I don't know quite what to make of a wedding quilt finely pieced out of license plates. More like chain mail than blanket, it's not comforting. But the amount of energy that went into the cars and gas and manufacturing could keep a lot of people warm for a long time. In this way the pieces vibrate with oddity and irony.

After she moved to Seattle many years ago, she says:

I missed New England a lot (in the early days) and began to use folk imagery in my work. Folk art is made from objects at your fingertips so I began to dig around Seattle for wood scraps, tin cans, and other people’s litter… 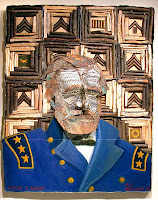 I ride a bike a lot. I find lots of stuff on the streets; gas caps, bottle caps, and auto tail light fragments, just to name a few. I once even found a $100 bill…I’ve found paint and brushes too. I became enamored of products that were used or discarded, particularly soda and tin can graphics. I began to ‘quilt’ different pieces of soda cans together, mixing color combinations…

The type of work I’ve done over the past 25 years grew out of the fact that I started out with little or no money and I missed New England. These pieces reflect an ‘I-can-do-it-myself’ attitude and good old Yankee ingenuity. As I’ve often said in the past, I don’t have to spend an arm and a leg to have fun and pick my brain.

It's low-energy art, mostly bent and cut and pieced with wire and rivet. Low-tech and manual, not fired by torch and weld and power tool, it's a little like beauty for a Mad Max world.

And a fine testament to the power of bike.

(Images from Greg Kucera Gallery)
Posted by Salem Breakfast on Bikes at 7:00 AM