Eyesore or Diamond in the Rough? Old Freight Depot Available! 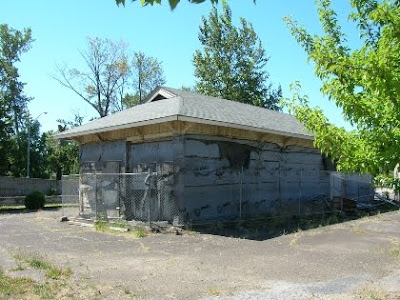 Can you think of a creative reuse for an old building located at a key transportation hub? 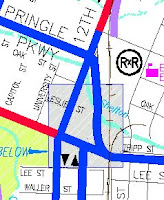 Stuck in Salem's own bike bermuda triangle is the 1889 Freight Depot.

The Statesman featured it in a "watchdog" article the other day, calling it an eyesore.

Not perhaps coincidentally, earlier this month it was also on the agenda of the Historic Landmarks Commission. ODOT historian Chris Bell talked about it and solicited ideas. The building inside is apparently in ok shape, and the roof has not been leaking.

ODOT is looking for partners who will operate and use the building. Who knows what terms they want, and maybe it cannot pencil out economically.

But wouldn't it be great to see some kind of bike station here? It's near Willamette, at the train depot, close to downtown and the Capital. Even with the tricky traffic patterns, it could be a cog in Salem's transportation network. Even better, with more bikes would come better traffic engineering! The area should become a working, multi-modal nexus, and a project like this would help knit connections.

Got other ideas? Drop a note!

(Image: University of Oregon)
Posted by Salem Breakfast on Bikes at 12:01 PM

Hmm, maybe a visible, useful home for the area bike taxis and a station for rentable bikes. Oh with some lockers or ?? for the day tripper?