A Fix for Mission and Winter

While you're at Breakfast on Bikes tomorrow, check out the intersection and consider improvements proposed by students participating in the Sustainable Cities Initiative.

You may remember that earlier this month students from the University of Oregon Bike Planning Class presented as part of the Sustainable Cities Initiative. You can see posters for projects titled "Bike Through the Park," "Liberty to Ride," and "Women on Wheels." 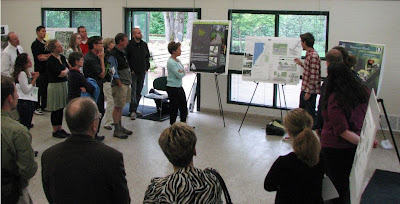 (Photo: Jeff Leach)
Here's more from "Ride Through the Park"!

Amber, Colin, Jason, and Monica put together a proposal for a bike boulevard along a Church Street alignment, using a route through Bush Park. Part of the project included improvements to the intersection of Mission and Winter.

The clip shows the existing conditions at the top, and a straightened alignment for people on bikes in the bottom half. (Click to enlarge image.) The proposal would reduce congestion in the sidewalk, and eliminate the awkward 90 degree turns on the south side of the intersection.

Check it out and let us know what you think!
Posted by Salem Breakfast on Bikes at 3:00 PM