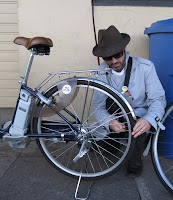 Remember when Gabe Klein was in town for a Sustainable Cities talk?

He inflated the tire on the Eneloop for Courtney.

Now he's the Director of Transportation for the City of Chicago. Yesterday he talked with the Chicago Tribune about city transportation.

The more people we can get biking, walking and taking local transit, the less we will clog the arteries with cars that don't need to be there. Things will have to change. The European Union announced that by 2030 they will close the downtowns to automobiles in most of Europe's cities.

On the price of gas:

If I had my druthers, do you remember when gas spiked a few years ago to $4 a gallon for the first time? I would have pegged the price at $4. Then, when it drops back down to $2.50, take the increment and invest it in the infrastructure. Some people say that's crazy. But the CEO of General Motors (Dan Akerson) said the other day that he wants a $1 increase in the gas tax to fund transportation. I never thought I'd see that, but people's thinking is changing.'

We are going to have to put a lot more money into transit. All transportation is subsidized, most of all, roads. The pendulum will shift. We'll end up investing in transit. We'll have to borrow, but we'll need to do it.

The full interview is worth a read for its 21st century thinking! Klein clearly is not stuck in Eisenhower-era America!
Posted by Salem Breakfast on Bikes at 9:00 AM

Wow, that is amazingly encouraging.