In the Statesman today is a piece on the City's investment in softball fields and marketing softball tournament tourism.

A report by Salem Public Works indicates that every taxpayer dollar spent in 2010 returned more than $20 to the local economy, and even with a slow start to the season, residents can expect an even healthier return in 2011....

The 2010 softball program generated an estimated $2.99 million for the local economy.

Four national and three world tournaments were held in 2010. These events alone brought in more than 3,000 players and spectators.

Even without any marketing or facilities, Salem will host Cycle Oregon Weekend in two weeks and expect 1,700 people on bike for three days.

In 2012 the Northwest Tandem Rally will come to Salem.

Each spring and fall the Monster Cookie and Peach of a Century bring thousands of riders to Salem.

But Salem's still not really on the map. 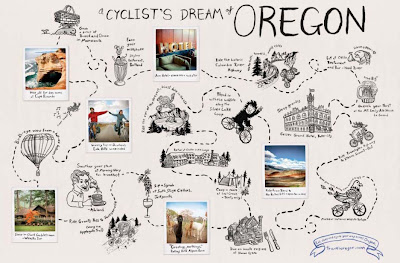 The Travel Oregon map uses for marketing bike tourism is noticeably quiet on Salem. The Capitol's missing! Why is that?

Over at the Salem Area Trails Alliance, Jeff has an analysis of the economic benefits of mountain bike tourism (here and here). Oakridge

So think of the economic benefits of investment in bike tourism: It just makes cents!
Posted by Salem Breakfast on Bikes at 12:01 PM

Hear, hear! Bike investment = best bang for our buck! Isn't it sorta fishy that they didn't hire a third party consultant to conduct the analysis?

Jonathan has bikes and $$ on the mind as well!