Dogbane and the Pineconian Order: More Art at the Speed of Bike

Yesterday at the State Library's lunch hour lecture series, two very bikey ODOT employees talked about their work. And though the subjects of their talk were highway projects, the work and its ends didn't unfold at the speed of car. 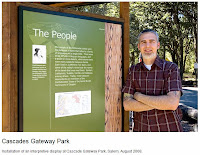 You might have seen ODOT Archeologist Kurt Roedel around town. Riding a single speed Schwinn Varsity with narrow, messenger-style handlebars, he's got a distinctive profile!

Kurt talked about a project to relocate about 150 dogbane plants from the side of a highway to a nature preserve.

Dogbane has very long fibers and it turns out is great for baskets and weaving.

“People purposely try to eradicate dogbane,” said Robert Kentta, cultural resource director of the Confederated Tribes of Siletz Indians. “They see it as a weed. Some people also think it’s toxic for livestock.” 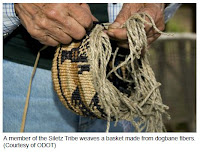 To the Tribes, dogbane is a key component in their way of life. The plant’s reddish-brown fibers are gently stripped from twigs and twisted into a strong string that can be used in everything from creating fishing nets to weaving intricate baskets.

In 2007, Kentta contacted ODOT archaeologists Kurt Roedel and Mary Turner to inform them that the important plant was growing in a narrow strip of right of way along Oregon 99W north of Corvallis...

Roedel and Turner worked with District 4 crews to preclude spraying for one year to allow the dogbane to grow large enough for transplant to a safe location. 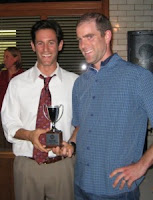 Until he "retired" from competition last summer, you might remember Chris Bell as the perennial winner of the "Brian Reynolds Distance Award" for highest mileage during the Bike Commute Challenge. Especially during the summer, Chris regularly commutes by bike from Portland to Salem!

When he's not biking he's an ODOT historian.

Chris talked about a restoration project on one of Conde McCullough's early designs. It was revised significantly by the Feds before being built and presented several uncertainties. Located on an old historic highway to Crater Lake, the Mill Creek Bridge had been neglected, the concrete was deteriorating, and pieces of it were missing.

During research for the restoration, early drawings turned up showing a column detail, light post, and lamp for a set of missing light fixtures.

Chris was able to match the drawing to an existing column on the Historic Columbia River Highway. The Stark Street Viaduct had been built a few years earlier, but it also used the same columns.

Chris calls the pattern "the Pineconian Order." The scroll is vaguely Ionic, but the pine cones make it distinctly Oregonian! The restoration team was able to make a cast and reproduce the columns for less money than off-the-shelf comparable pieces would have cost. That's pretty cool. (Column detail Michael Goff.)

Bikes weren't a formal part of the lectures, of course, but while driving you can't weave a basket or admire a pine cone on a column. It's not surprising that these two custodians of art and history, while even working for the highway department and on highway projects, might also find beauty at the speed of bike.
Posted by Salem Breakfast on Bikes at 7:00 AM

Not only do I appreciate this post as one of the presenters, but the point is very well taken (and one we didn't make): that which happens at the speed of bike is very different than what you experience at the speed of car. We are also widening that bridge in Prospect (Mill Creek) for the sake of making it slightly safer for bikes...since many bike to and from the school (which is the big noise in town) over it...