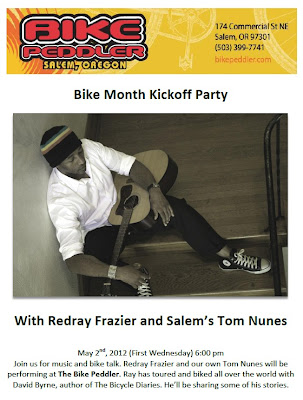 Don't forget about the musical party at the Bike Peddler on First Wednesday!


Redray Frazier and our own Tom Nunes will be performing at The Bike Peddler. Ray has toured and biked all over the world with David Byrne, author of The Bicycle Diaries. He’ll be sharing some of his stories.

What a great way to start National Bike Month!

Be sure to check out what Scott's and Santiam are doing as well!

On Your Feet Fridays 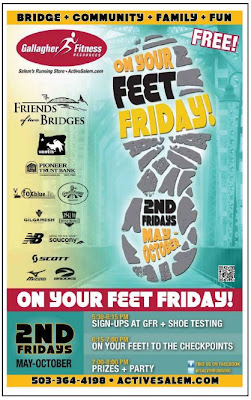 It's not bicycling, but it's pretty cool anyway. Gallagher Fitness is partnering with other downtown merchants for a series of monthly scavenger hunts around downtown - with a focus on walking or running. The first one will be on the 11th, with sign-in between 5:30-6:15pm at Gallagher Fitness.

That's great idea to promote downtown, and a great idea for active transportation.

(And though the focus is on the planned Riverfront-Minto Bridge, maybe the series will give visibility to improving downtown sidewalks, crosswalks, and other facilities for people who walk!)
Posted by Salem Breakfast on Bikes at 7:00 AM