Hawks, Houses and Fences: The Edges of Sustainable Fairview 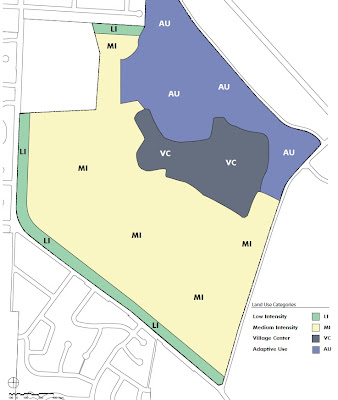 One of the things that has baffled me about the vision in Sustainable Fairview is the way the commercial pods are either tucked, almost concealed even, inside the development or they front the industrial section towards the airport. The lack of relation to the existing neighborhood to the south and west was curious.

Why wasn't there mixed use development on Battle Creek and Pringle Roads? Shouldn't something activate the corners and crossroads? 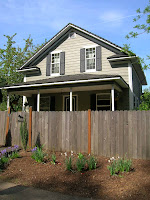 It turned out that this was an instance where looking at a map yielded a totally different read of the property than walking it. And confirmation that reality is almost always more complicated than the ideal.

This is one of the very few houses that actually fronts Pringle or Battle Creek Roads. Even though it's had some updating, the narrow windows, symmetry, and other details suggest it's an old farmhouse. When the road was narrower it would have had a much larger front yard. For privacy and shelter from auto noise and exhaust, the front is totally fenced off. 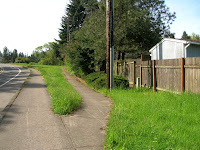 Most houses backed onto Pringle and Battle Creek Roads or fronted the side streets.

Here's a path connection to a cul-de-sac that backs onto the bend where Pringle Road turns into Battle Creek Road. The fencing and back yard makes clear the ways that nothing relates to Pringle/Battle Creek and that it is regarded as an annoying through-way. Formally the City classifies it as a minor arterial.

As the old house suggests, the area gradually developed before being incorporated into the City, and much of it was developed to County standards. Most of Battle Creek lacks sidewalks. 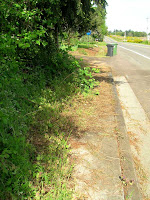 In a few places there are sidewalks, but they are essentially abandoned, and the properties that might have fronted them are vacant or reconfigured to front side streets or other streets "inside" the development.

The sidewalk ends at the unused driveway and there is only the bike path.

In many places along Battle Creek, in fact, there are abandoned driveways, signs that more properties used to front Battle Creek Road.

The Sigificance of Slopes 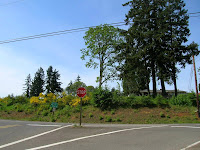 Topography is also a challenge. Looking at a map, you might think the crossroad of Reed and Battle Creek could be important.

But the slope is actually pretty steep and the houses above Battle Creek Road there don't relate at all to the road. It's a T-intersection of country roads.

Slopes, therefore, are much more significant than a bare map might suggest. 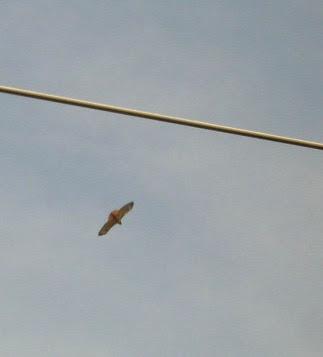 Several Red Tail Hawks confirmed the significance of the slopes. The contrast between rise and draw, green (even swampy) and bare, surely made for some terrific thermals.

Two other intersections really show the ways properties back onto Battle Creek and the kinds of views that might be available on the Fairview property.

At Independence trees provide the fence line. There are no sidewalks.

At Sunland there is an abandoned driveway, fencing, and a view of the watertower and out east.  No sidewalks again.

But yeah, the views. That's a critical part of the Fairview project. Fair View, right? 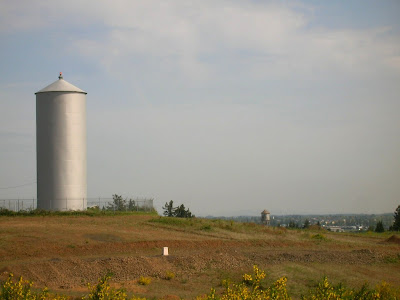 On a clearer day you'd see the mountains. 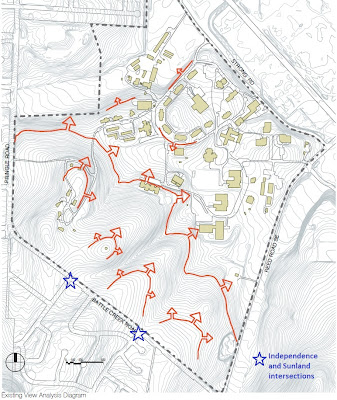 Single-Family Homes in the Mix

I have thought of Sustainable Fairview as a cutting edge mixed use development. But it is really more of a development for single family homes with a terrific view. This may have been obvious to those involved in the design charettes and concept development, but from "Sustainable Fairview" it has seemed reasonable to infer a higher density and mixed use.

You can see row on row of homes on view lots deployed in graceful curves across each rise on the upper slopes. 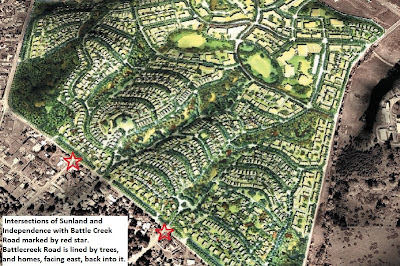 You can also see how a row of trees line Pringle and Battle Creek Roads, with the houses backing onto them from the other side.

I have to admit, this diminishes somewhat my enthusiasm for the project, as it looks more conventional than I had supposed. I bet there are bigger margins in the view lots than in the mixed use development lower down.

On the other hand, because of the way that Pringle/Battle Creek is a suburban arterial rather than streetcar arterial, the streets aren't walkable and it might make little sense to try to put a mixed use development on it that would serve the neighborhoods to the south and west. They're pretty much walled off from Pringle/Battle Creek. 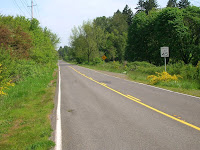 Reed Road also lacks shoulders and it has a 45mph speed limit. It is totally unwalkable, without even a bike lane for refuge.

So basically from all sides it's clear why the Sustainable Fairview developments are oriented inwards, centripetally, and not outwards towards the edges and adjacent neighborhoods. The edge conditions are very poor for a walkable environment.

But this fact also makes the developments more like conventional enclaves than streetcar and neo-traditional.

And maybe that's not entirely a bad thing. Call it compromise, realism, or pragmatism, it means the Master Plan is sensitive to the site and to conditions in Salem. It probably makes it more buildable and commercially viable - if less visionary. The cluster of single-family houses also diversifies the "internal" economy of the development and at least when it was conceived as a whole this would have "balanced the portfolio," as it were, balancing the economics for the developers, and balancing the land uses and traffic patterns for buyers and residents.

Contrast this with Nature City, the speculative project on display as part of the show Foreclosed: Rehousing the American Dream at MOMA recently. 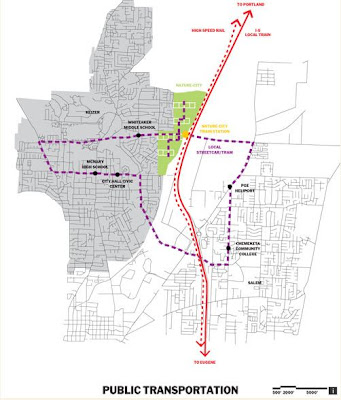 The concept development is in green at the location of Keizer Station. The rail line is arbitrary relocated to along I-5! 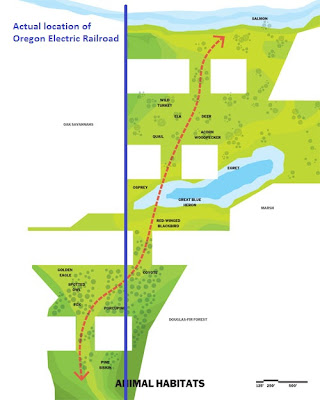 Here's the real location of the rail line along with some fanciful wildlife habitat. 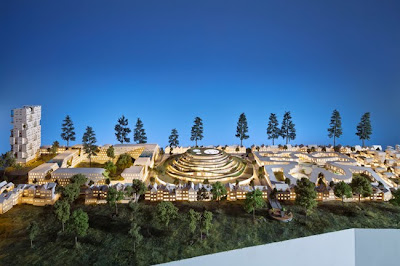 The scale and materials envisioned mostly ignore the context of single family homes around Keizer Station. Increasing density and mixed uses might be desireable, but not so abruptly. It's like a ufo suddenly landed and created a colony.

On Monday City Council will review the Planning Commission's decision to approve the Simpson Hills Refinement Plan (here and here). 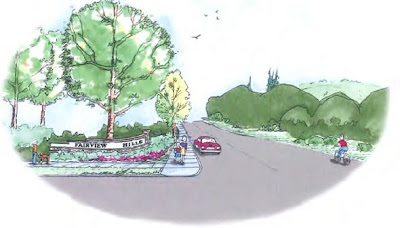 Hopefully Council will overturn the Planning Commission's decision and send the refinement plan back for a real refinement that hews to the spirit and intent of the Fairview Master Plan.

Via the recent discussion at Hinessight, architect Geoffrey James offers an analysis with specific recommendations.

Not surprisingly perimeter traffic is Number 1:

EXPLANATION: The UGA Permit calls for presently unsafe Reed Rd. and also Battle Creek Road (and Pringle) to be improved as part of the development. It does not specify exactly when. MNA demands that the improvement should come before the 450 apartment unit traffic is created. The refinement plan does not yet do that. The applicant should build more connections out from the site now to spread the load on and off site.Summary: Improve Reed and Battle Creek by the time the apartments are occupied.

Internal connectivity also needs to be improved, both the roadways proper and the multiuse path system.

Tomorrow we'll see what's in the agenda packet and staff report. There may be more to say.

Even if the whole concept looks now more like an incremental step in green development rather than a revolutionary step, it's worth doing.  I still wish more attention were given to the perimeter conditions on the south and west, but with Fish and Wildlife moving to the Industrial Park, and with Wandering Aengus' cider house and the new Gilgamesh brewery there as well, perhaps there is a new cluster developing on the airport side.  That will be interesting, even exciting, to watch.

In any event, all three parcels should look to the Master Plan and try their darndest to fulfill it. Make it glorious or definitively fail, go big or go home. This is not a place for the middling try.  As Jedi Master Yoda said, "Do or do not, there it no try."
Posted by Salem Breakfast on Bikes at 12:01 PM