With the holiday Council meets on Tuesday.

Most significant on the agenda is information about the "notice of intent" for the combined Transportation Enhancement and Bicycle-Pedestrian grant programs. The State of Oregon administers these funds (TE dollars come from the Feds, and Bike/Ped from the State gas tax), and as part of the streamlining involved in creating the "active transportation section," these two funding sources are being combined in order to achieve efficiencies in leveraging, coordinating, and administering.

The City has chosen to proceed with three projects:
TE funding has provided for a large portion of the Union Street Railroad Bridge work, and all of the projects look like the kinds of things that have been funded before.

Yes, but. This list is nibbling around the edges. 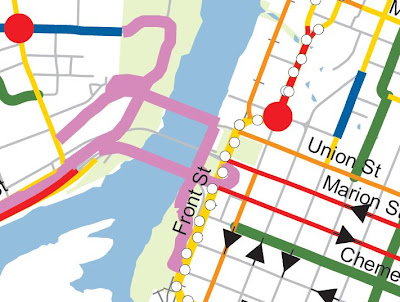 A commenter pointed out last week that one of the great virtues of the new bike map is that it really shows the disconnected archipelago we have created - islands of facilities that are separated. On key routes through town, our bike system lacks continuous connections, and only skilled and confident people are able to forge across the moats and barriers.  The map shows how we have stranded the Union St. RR Bridge, orphaned it from connections to downtown and west Salem.

The Minto Bridge and Path will be very nice of course, but together it doesn't complete a key transportation connection connecting homes, jobs, and business. The Brown Road and Orchard Heights projects would be very nice, but they are on the periphery. Two of the three projects are for park connections. None of them pop with "wow" factor for people who bike for transportation.

Of the three, the Brown Road remediation for sidewalks and bikelanes is probably the most useful, as it will be helpful in an area with poor north-south connections paralleling Lancaster, lots of multi-family housing, and may serve a larger proportion of those for whom bicycle transportation is a necessity rather than discretionary choice.  It also helps with connections to McKay High School and Scott Elementary School. But it's remediation, nothing forward-thinking, visionary, or transformative.

Some would say that the Minto Bridge and Path could be transformative, but I continue to worry that our devotion to it may suck up resources that might be better used on other projects, especially those in the public right of way that will connect jobs and homes and actually offer alternatives to car congestion.  (If nothing else, finish the Union St. RR Bridge project before you start another big project. That's the transformative backbone of a system!)

The Bike and Walk Salem Public Hearing at Council has been pushed out to August 13th.

The matter of the alley north of the cemeteries looks to hold the hearing on June 25th. (See here and here for the latest, summaries, and links to yet more.)

The City's going to return some grant money, a 5% match of about $50,000, for airport expansion since the deadline to use it passed.

The City proposes to adopt a Public Art Policy and Guidelines manual.

It looks like the City has a new Assistant City Manager as Peter Fernandez is on the staff reports as reverting to "Public Works Director," replacing interim Director Robert Chandler.  Thanks to Fernandez and Chandler for stepping in!
Posted by Salem Breakfast on Bikes at 8:00 AM

The hearing was set for the 25th.

Interestingly, few changes were made to the budget proposal, which was also on the agenda.

Councilor Bennett successfully moved that $70,000 be moved from street maintenance to fund library hours - should we call it the "Read More, Drive Less" initiative?

During the meeting a budget committee member tweeted that while in some years past Council amended the proposal in significant ways, this year "Council is respecting its public process and volunteers" in keeping the main outline of the budget committee's recommendation intact.