In the News: Another Polk County Death, Bridge Op-Ed

The Oregonian is reporting that the person on bike struck during "Reach the Beach" near Grand Ronde has died.

At 2:25 p.m. Saturday, Dayley was on a bicycle going west on the shoulder of Highway 18, when a 2003 Chevrolet Avalanche truck, also going west, veered right to avoid traffic and struck the bicycle, according to an Oregon State Police release.

The driver of the truck was Fred Moore III, 24, of Battleground. He was not injured.

Dayley had joined other cyclists participating in the "Reach the Beach" bike ride, a popular American Lung Association cycling event. The ride started in four different locations throughout Willamette Valley and ended at the Oregon Coast in Pacific City. Dayley was not an official entrant of the ride.

Heartfelt condolences to friends and family of Steven Dayley.

In the paper today is an opinion piece about the Salem River Crossing: 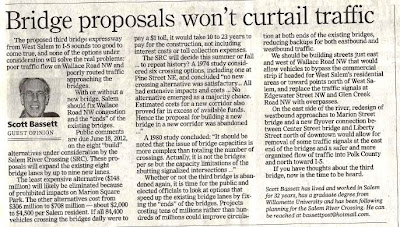 Scott Bassett dwells on the history:


A 1974 study considered six crossing options, including one at Pine Street NE, and concluded “no new crossing alternative was satisfactory... All had extensive impacts and costs ... No alternative emerged as a majority choice. Estimated costs for a new corridor also proved far in excess of available funds. Hence the proposal for building a new bridge in a new corridor was abandoned ...”

A 1980 study concluded: “It should be noted that the issue of bridge capacities is more complex than totaling the number of crossings. Actually, it is not the bridges per se but the capacity limitations of the abutting signalized intersections ...”

Bassett notes that much more cost-effective solutions can be developed to address traffic near the bridges.


Projects costing tens of millions rather than hundreds of millions could improve circulation at both ends of the existing bridges, reducing backups for both eastbound and westbound traffic.

While his proposals remain rooted in the primacy of the drive-alone trip, fundamentally he's on the right track.

In the context of today's news it feels odd to point this out, but this is a happier note - though I suppose it's not entirely unambiguous. On he paper today was a self-promotional "wrap" for SJ subscriptions featuring, among others, OBRA Director Kenji. While the wrap itself is excess paper, the images in the collage represented community interests, and this was a pleasant suggestion of bicycling going mainstream.
Posted by Salem Breakfast on Bikes at 11:00 AM

The Yamhill News Register has a fairly clear photo of the scene.

The shoulder is super wide, and it's difficult to believe that there's any scenario in which the driver executed a lawful passing movement on the right. More to come when the investigation is closed, I'm sure.

A comment on Oregon Live suggests the driver of the truck was following another vehicle too closely and swerved to the right to avoid rear ending the vehicle in front. Here's the comment:

"I was about 1/4 hour behind this rider when the accident happen. There was was another incident (that is why the ambulance was so close) that had traffic stopped. The driver of the truck swerved to the right to avoid rear ending the stopped cars."

Bridge - Who is "driving" the bridge project? A group? A miss guided bureaucrat? ODOT? I tried to comment on the State's web link but it seems the State is living in the dark ages and will only accept mailed responses? I plan to attend the upcoming public hearing with Curt et al. I completed the "informal" survey. Other avenues to comment? I would like a direct email to the folks making decisions or pushing this project. We need to reduce single driver occupancy by providing several appealing travel options, not another bridge!