On the north side of Pringle Creek, at the corner of Trade and Commercial, is one of my favorite trees. 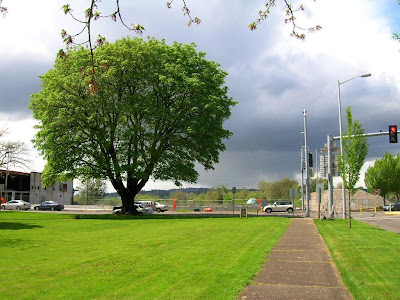 I wasn't sure what kind of tree it is, but it's old, well shaped, and pretty glorious. City Urban Forester Jan Staszewski says it's a Bigleaf Maple (Acer macrophyllum), maybe 100 years old. Even though it's not quite as old as I thought it might be, especially against the Brutalist landscaping of the Civic Center, and the equally brutal Boise ruins, it's a talisman for age, persistence, and beauty.

Fortunately, in the bridge replacement, I'm told they will be retaining and protecting most of the trees, including this one.  The project isn't perfect, of course, but nothing is; and all things considered, it's hard to find fault with this piece of the road bond.  If a "great" project would add a buffered bike lane or cycle track the length of Commercial, at least this does no harm, and the improvements for walking along the creek will be very nice indeed. 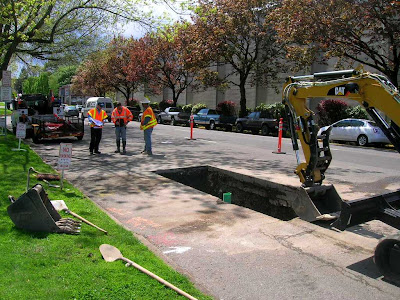 A couple of weeks ago now preliminary excavation started on the bridge deck and approaches. 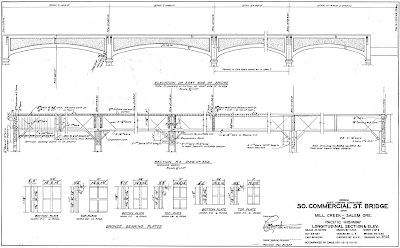 The existing bridge dates from the late 1920s and has ties to the era of State Bridge Engineer Conde McCullough. You may recall a note in passing about the Yaquina Bay Bridge. McCullough lived in Salem, designing it and many other 1920s and 30s bridges on Highway 101 and elsewhere around the state. (He should be a bigger deal than he is at present!)

Part of the archeological and historical assessment was to determine how much the design might actually owe to him. Relative to the great bridges on the coast that are of unquestioned provenance, the Commercial Street bridge is plain and humble.

In no great surprise, McCullough checked, signed and approved the 1927 plans, as Commercial Street was at that time part of the Pacific Highway No. 1 (first designated in 1917), but he did not appear to exercise any direct role in the design.

So we might say the bridge offers a trace of the great history of bridge design in Oregon. It's one of those things that doesn't need to be preserved, but which for its age and links to grander history at least deserves a tip of the cap. Life and history move on, things pass away, but when you bike, walk, or drive by, take a moment to think about design and beauty in the built environment here in Salem. (We need a renaissance of good design here!  Too much is pedestrian in the bad sense of the word.)

Here's another view of the flume that will be demolished. It turns out it's not very old. The historical assessment concluded that it dated from mid-century and was related to the pulp and paper business and not to any of the earlier flouring mill or lumbering activities on the site. 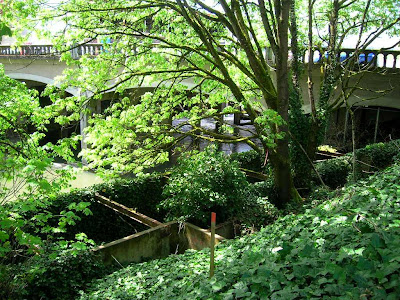 And here's a similar view from a slightly different angle. It shows the streamside restoration, canopy and ivy removal - the day-lighting! - and the path alignment along the former route of the flume. 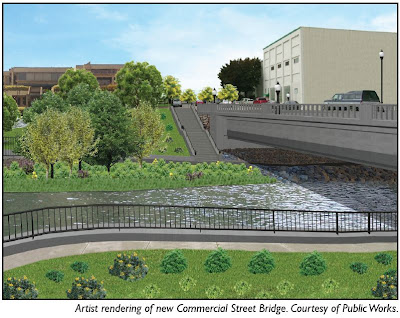 As for beauty, the Brutalist landscape architecture desperately needs some. Hopefully they'll clean out the algae in the pool and figure out the circulation (and eliminate fertilizer?) problems that are causing it. 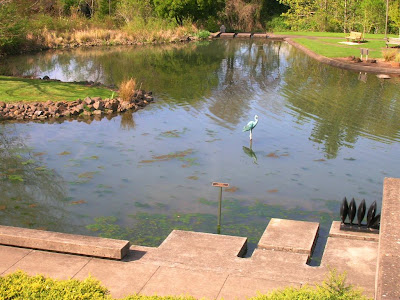 The angular steps are unnatural and promote stagnation. Soil has formed in one corner and a mat of grass grows! 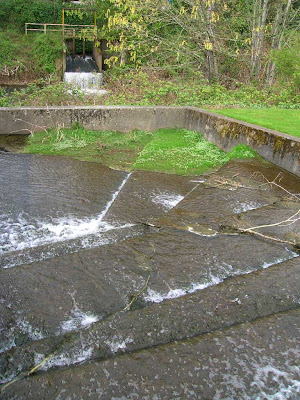 The project will be interesting to watch, and perhaps excavation will uncover more ties to Salem's old industrial past or to the old water works. There are some tantalizing brick foundations!

The project team will also be alert to signs of pre-settlement Kalapuya, ready to pause should human remains or historically significant traces be found.

(For more on the flouring mill and a plan view of the path system, see the earlier note on the bridge replacement.)
Posted by Salem Breakfast on Bikes at 9:00 AM

The total length of Yaquina Bay Bridge is 3,223 ft (982 in meters). Also, it is one of the eleven major bridges on the Oregon Coast Highway. I already noticed at first that it has Art Deco and Art Moderne design motifs and forms which are borrowed from Gothic architecture.

The Yaquina Bay Bridge is really beautiful, especially at night in which you can see the bright lights across the bay. You will definitely love the view, with all the fantastic light and colors around the area. It really gives the bridge a livelier feature during the evening, really highlighting its wonderful structure!