In the News: SJ Misses Mess at Market and Lancaster 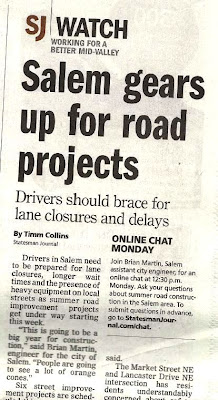 It's great the Statesman is letting drivers know about the obstacle source they will face this summer. But as a part of the "SJ Watch" series, "Salem Gears up for Road Projects" misses the mark on asking whether the changes are actually any good.


The Market Street NE and Lancaster Drive NE intersection has residents understandably concerned about safety and traffic problems. According to data collected by the Oregon Department of Transportation, there were no less than 49 crashes at the intersection between 2008 and 2010. At least 28 of which resulted in injury. 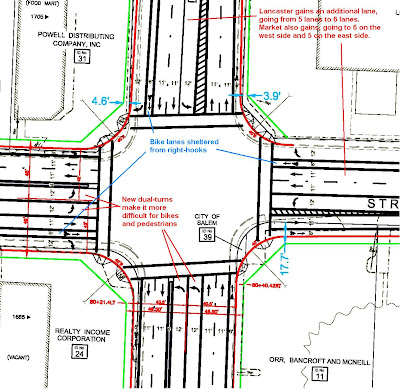 
The project will close Market Street NE between Lancaster Drive NE and Clay Street NE for as long as three weeks in July or August.

A second through-lane westbound will be added on Market Street NE for a short distance east of the intersection. The project also includes new storm sewer curbs, sidewalks and traffic signals. S-2 Contractors will be doing the work.

The $8.3 million project will continue through the end of the calendar year.

But will the dual turns, longer crossing distances for people on foot and on bike, more through-put, and an implied increase in allowable speeds actually increase safety?

If the purpose for watchdog journalism is to ask questions and subject government claims to analysis, this piece on the summer's road bond projects doesn't go deep enough. At the very least, there should be some recognition that what is good for people in cars is not always good for other users of the road.  Lancaster is already horrifically biased in favor of car through-put, and this intersection widening doesn't change that.

(And it is a preview for Wallace and Glen Creek!)
Posted by Salem Breakfast on Bikes at 8:30 AM