At last night's Open House and Public Hearing for the Salem River Crossing, the best part might have been the large posters showing aerials of the bridge renderings. Finally, you can get a scale for the thing.

The pdf version of the DEIS, for example, doesn't convey visually the ginormitude of the multi-lane viaduct system on the south side of Edgewater, easily doubling the size of the existing Highway 22 cross-section and eliminating the greenway and any connection to the waterfront. The posters are good for this. But there's much to see and digest, likely too much for a single presentation.

Here's a different ginormitude at Wallace and Glen Creek. 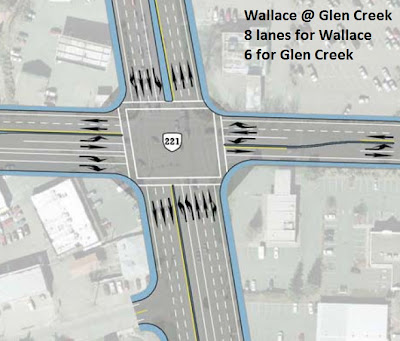 A small crowd listened to a presentation. Another equal-sized group apparently had come and gone in the first hour. Other posters on the lower floor showed estimated price tags and theoretical delay-hours in congestion for each alternative. 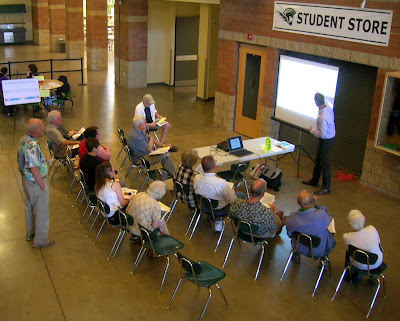 In back of the chairs and projector, an ODOT staffer answered questions about right-of-way. A common conversation seemed to be pointing to a map and saying "here is my property; what will happen?"  The schools across the street were a recent reminder of the power of the state to condemn property. 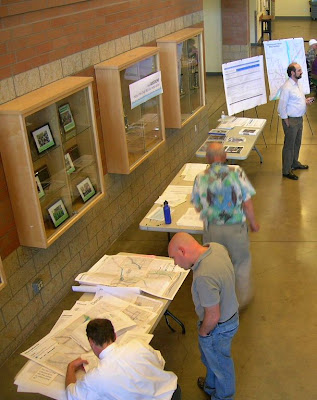 At the end of the table was a large chart of impacts to bicycle facilities. It was labeled "not part of the DEIS" but was "provided for informational purposes." It gave a check mark for "increases bicycle connections across the river" but said nothing about increasing connections generally or connections across/under/over/around the bridge alignment and ramp system.

In conversation, one staffer readily admitted that a particular formula was very old and outdated. Washington state, he pointed out, was beginning to use models that corresponded more closely to early 21st century behavior and technology.

In the short amount of time it was not possible, of course, to zero in the particular formula, but the conversation shows how truly rickety are parts of the analysis. Proponents quote with certitude, but many of  the conclusions are all so very tentative. It's too bad we can't have error bars on the graphs and charts.

City Councilor Clem was there. For him the center of the matter was regional travel, external trips on Highway 22 connecting to I-5. This map is from a different presentation, but it makes the point that he sees the bridge as a highway by-pass to get people out of downtown who are just passing through. 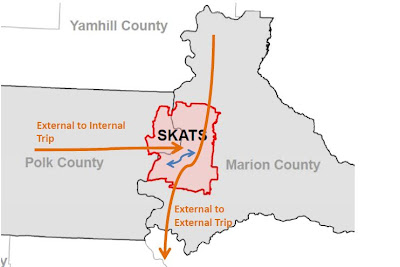 Candidate for City Council Warren Bednarz was also there with a particular worry about sceptics.

In an October 19th, 2009 Statesman article about the Salem River Crossing, talking to a reporter he observed that


a major piece of this process [the DEIS] means mitigating the need for a third bridge.

"It's required by law to do that," Bednarz said. "There will be a group of people out there who will say that a third bridge is unnecessary … These (processes) can keep them from turning around and filing a lawsuit."

Kenji was on his way out and reported that State Senator Peter Courtney had been there.

It's good to attend these just to look and learn and to talk to electeds so they can gauge the temperature of sentiment.  The informal conversations cannot subsitute for formal public comment, but they can be a helpful adjunct.

The next Open House and Public Hearing will be Thursday, May 17 from 3-7 p.m. at the Chemeketa Center for Business and Industry (626 High Street NE, Salem).

For more on the River Crossing see a summary critique and all breakfast blog notes tagged River Crossing.
Posted by Salem Breakfast on Bikes at 9:00 AM

When understood properly, its not worth it.