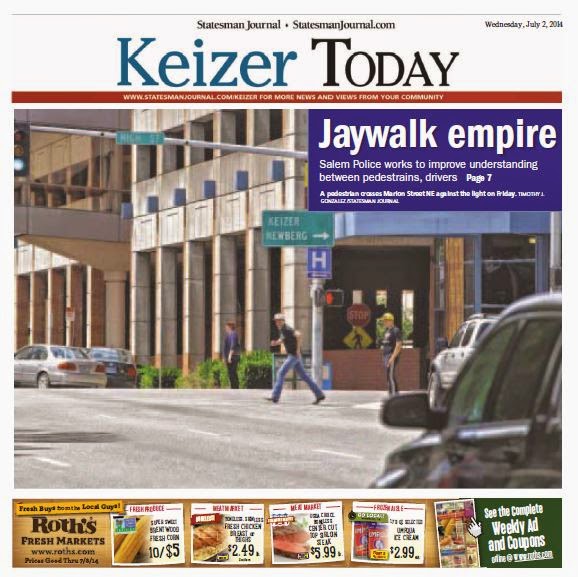 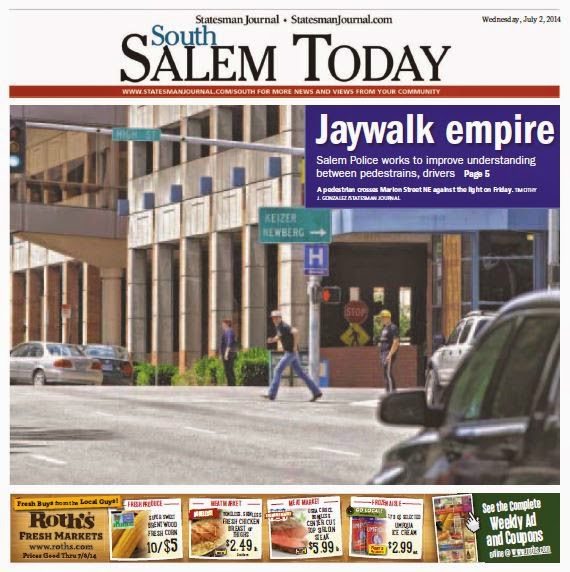 By accident or design two of them conjure a sinister empire, a mob even, of jaywalkers.

They recycle last week's story about the ways people on foot threaten carspace with their imperial ways and should be dressed as hazards with traffic cone apparel.

It seems to me that the implied "understanding between pedestrians, drivers" in the subhead is twofold:
Plainly that messaging is not all that coherent, but it does speak to two different frames: In a crash, once catastrophe unfolds, people on foot are vulnerable in a way people in cars are not; in a changing legal and cultural environment on the rules and conventions of the shared public space called "a road," people on foot are beginning to regain what they lost in the 20th century of autoism.

But instead of speaking about the legitimate claim people on foot have to the road, and some of the ways, social, environmental, and economic, we might want increasingly to curb cars and car use, it talks about the "jaywalker," who ostensibly does not have a legitimate claim, and who should be regarded as a wrong-doer, an "other," not one of us, not a true member of the community.

But if there's a conspiracy, it's the newspaper staff's knowledge that journalism is in peril, that advertising dollars are shrinking and at risk, and losing big accounts not something anyone wants to happen on their watch...

No matter how strong the official "walls" between news, editorial, and advertising, there are tacit understandings galore and a deeply entrenched paradigm past which many cannot see. I don't know there's an easy answer for this: cars are a significant cultural problem of the moment, and we should expect lots of debate; and the revenue stream for high-quality journalism is an even more acute problem right now.

We all want a good paper, but how will we fund it?

Back to walking, hopefully we can keep talking about this and in time revert to a more normal understanding of streets as shared public space. The understanding was changed in the early and mid-20th century, and it can be changed again. It happened with cultural and economic effort, and wasn't something that occurred "naturally" or by "necessity."
Posted by Salem Breakfast on Bikes at 12:01 PM

When I grew up, admittedly mid-20th century, I learned a simple rule of right of way. Pedestrians first, bikes second, cars third. When I bike I try to always be respectful of pedestrians and give them the right of way. If only cars would do the same. And traffic planners wouldn't design long streets with no crosswalks or walk signals for extremely long stretches.