The City has recently posted a Hearing Notice for an application to demolish the Marion Car Park at Ferry and Commercial.

In a spendid instance of stacked historical ironies, the Holman building which had played a key role in early Oregon governance, was demolished for the Marion Car Park, despite State Archivist David Duniway's efforts at preservation. The failure in part led to the creation of the Marion County Historical Society. So it was kindof a big deal.

Today, the Marion Car Park itself has become a "contributing resource" in our downtown historic district, and so it requires special permission from the Historic Landmarks Commission to demolish it.

And it will go through a process a lot like Howard Hall's. What goes around comes around!


[It] is considered to be a property that contributes to the history of the district. It is now recognized for the integrity of the mid-20th century design and its importance in offering convenience to downtown shoppers 60 years ago when suburban developments were making many downtown business centers obsolete.

Readers will know that we are no friend of the holes in urban fabric caused by parking garages and surface parking lots, and regard mid-Century autoism with great suspicion, so we start with that bias.

This site, kitty-corner from the Conference Center, and just north of the Boise site, surely can be used in better ways than as an undersized parking garage. At present it is mainly a void in the urban fabric. If the applicant for the demolition also has a plan to redevelop the block, then the new value will in many ways be greater than the value of the old parking garage.

But they shouldn't be able to demolish it without a good redevelopment plan that will immediately be undertaken. If it would linger as a bare lot like the corner immediately to the north - that's no good at all. Another parking garage wouldn't be good, either.

As for the value of the parking garage as historical artifact, both the Catlin & Linn building and the Otto J. Wilson building attest to the first phase of automobile garages in Salem, and as such are more worthy of attention and preservation efforts.

The strongest argument for preservation is that the Marion Car Park represents a mid-century type of parking garage that is rare here. And that's true, so far as it goes.

Maybe this is the weakest point of the critique, the one that most clearly comes down to "just" personal taste. But from here the garage kitty-corner from the Capitol (above) seems like a much more worthy object! It has verve and energy - wings! - the parking garage just will never have.

It's hard to imagine the parking garage ever repurposed with new energy and commerce - especially at that location.

The mid-century parking garage is in urban terms an evolutionary dead-end, too small and too specialized and too harmful, and I just don't see a point to saving it.

Do you think otherwise? (If for example, you think the position here on saving Howard Hall and embracing the prospect of demolishing this parking garage is incoherent, let us know! This is a grey area of judgment, for sure.)

The hearing will be July 24th, and since it combines two matters of great interest here - the value of historic preservation and the blight of parking lots - I'm sure there will be more to say once a staff report is out.

It's an epic Charlie Foxtrot arising from a foreclosure and neglect!

But the new owners have no plan for redevelopment. They just want to demolish it and leave it a gravel lot. This is terrible all the way around. The Staff Report rightly recommends a denial of the demolition permit.

Also in parking...on Sunday there was a note about the problems our current parking rules seem to pose. (Dead horse alert!) 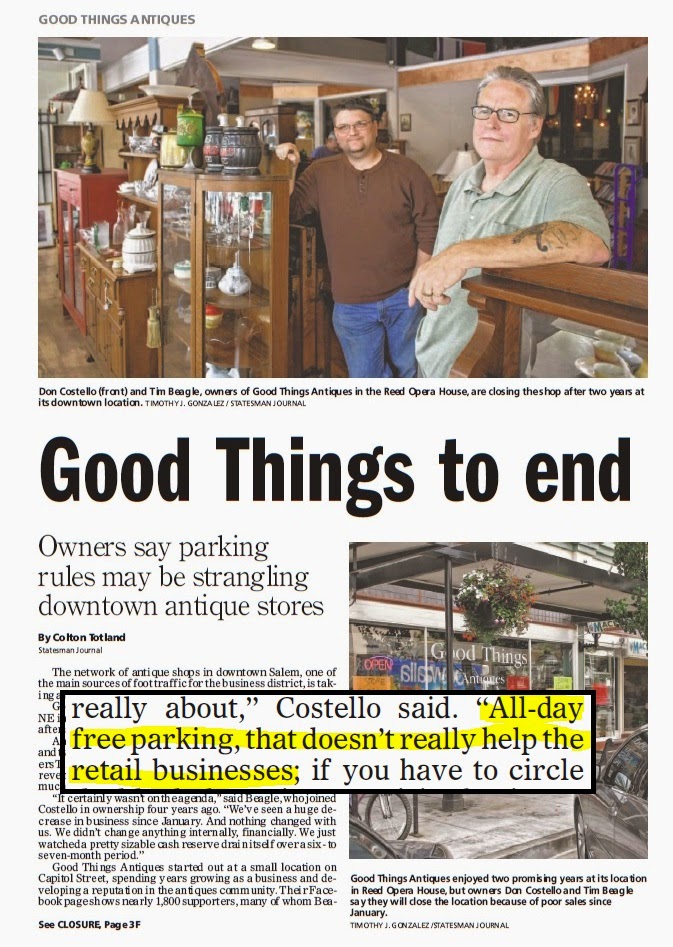 Unfortunately, rather than using the increasing body of evidence that free parking is a flawed policy and the parking petition a mistake, some folks seem to want the City to add epicycles of enforcement and layers of bureaucracy to a flawed paradigm of free parking.

Rather than this Ptolemaic approach, the simplest explanation is that free parking is a bad idea.

Maybe it's time to shift the paradigm and consider paid parking again? 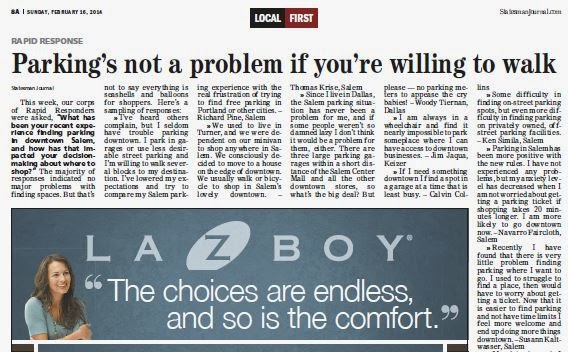 (Interestingly, back from this winter SJ commenters in the "rapid response" program seemed to agree that much of our "parking problem" is also a walking problem. With paid parking, people who want to pay in time can stroll from a free parking garage; people who don't want a stroll and who want a space right at the business they are visiting can pay in coin. The trade-off is clear and simple.)
Posted by Salem Breakfast on Bikes at 7:00 PM

I'm of the opinion that this location would be a great place to build a parking structure with commercial use on the ground floor. Room for either offices or a bar or restaurant would add to the amenities that would complement the hotel and conference center.

The actual parking structure to me is pretty darn ugly, nondescript and worthy of replacing with a more appropriate building. It would be nice to see something that was in the style of the buildings on the other corners with a rounded facade. But no more than 3 stories tall to keep in tune with the character of the area and not obscure the view too much.

At least that is my 2 cents worth.

What I see different about Howard Hall and this building is that Howard is by a famous architect, it is about people, not cars, and it is much more attractive to the eye.

I'm curious who would replace the Marion Car Park with a multilevel parking structure (and with a first floor devoted to commercial use). Would a private developer see the economics in building a private garage that generates revenue from visitors to Salem's downtown who are desperate enough to pay for a parking space? Desperate enough to pay for the privilege of parking a block away from Riverfront Park? I suppose that is possible, but to finance such a development a bank would want to see parking demand vs. available parking spaces.

Seems to me that there is adequate parking all over Salem, assuming someone is willing to walk a block or two. It is hard to imagine a developer - or a bank - committing to such a project.

Alternatively, is this multilevel parking structure something the City should fund? I would expect (naively?) that the City - and its citizens - would perform the same due diligence as a private developer.

As for Howard Hall vs. the Marion Car Park, I suppose I'm somewhat indifferent. In its current incarnation, the street level use is not engaging to the public. But a thoughtful renovation of that street level space could yield something great.

Since the City's existing parking garages are underused, and the Liberty Parkade is so near to this site, Jeff seems right about seeing great difficulty with a new parking structure penciling out.

Updated with clip from Staff Report. There is no plan to redevelop it. Bare gravel lot is the proposal.

Thanks for the Vox link, also, Anon. They've had some great coverage of transpo stuff, and it has been useful on other posts!