Well, now it's the turn here to defend the city against the paper. "City skimps on roadwork" is a misleading headline!

The City's actually doing a good job of extending the road bond, increasing by about 20% the budget and by about 50% the count of projects funded by the 2008 road bond.

I don't think there's any reasonable way to conclude that the city is deliberately skimping on roadwork - though a person might choose different projects to fund and construct. 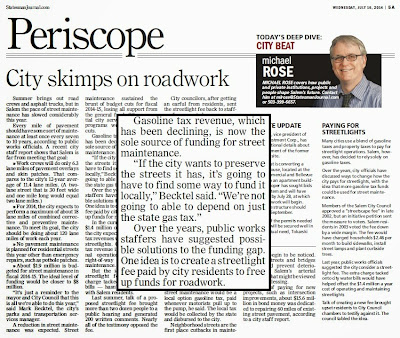 There is, however, a very real problem with transportation funding in general, the way we prioritize maintenance, and the gax tax.

From the piece:
The funds don't come out of the same bucket, but the money spent on the Third Bridge planning would have funded a full year's worth of maintenance.

And we continue to plan for something new and shiny when we already can't maintain our existing and deteriorating roads.

The gas tax is the most logical place to raise funds, and with it we need to make sure we prioritize fixing existing capacity over building new roads and new highways.

Whether done locally or done nationally, raising the gax tax further accelerates the shift to electronic cars, increases incentives to drive less, reduces petroleum-based carbon emissions - what's not to like? It dovetails with all our large policy goals of the moment, and is a fine intermediate proxy for a carbon tax.

Transportation policy was supposed to avoid this outcome for good reason — there's no point in building more roads than people want to use.

If the amount of driving happening in America is in decline, stepping up the level of financial subsidies offered to encourage driving is an absurd result. Either spending on roads should fall, or else road users themselves should be charged more money for their activity. Any other approach constitutes a deeply unwise ratcheting up of public subsidies to a polluting and dangerous activity, feeding a dynamic of overbuilding.

Highways and other roads are great. But they are also expensive to build. The traditional formula of trying to build a quantity of highways that's roughly proportionate to what highway-users are willing to pay to use them makes a lot of sense. The new paradigm in Congress where highway spending is unrelated to driving-related tax revenue is a bad idea, and its bipartisan embrace is one of the public policy disasters of the past few years. [italics added]

Ultimately, the gax tax will be self-consuming: As we continue to drive less and as we shift to electric cars when we do need cars, the gas tax will become obsolete. In the mean time, we should use it as best we can.

Just Raise It.
Posted by Salem Breakfast on Bikes at 12:01 PM