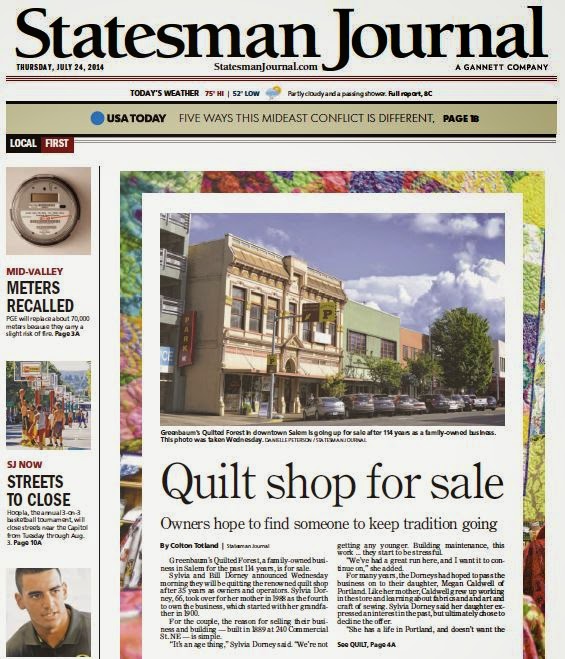 If you're not into quilting, it might seem like just a quilt shop but Greenbaums and the stub end of the Eldridge block in which it resides is no small part of Salem history, and the news it's for sale totally worth the front page space.

Much more could be written about it and its place in our urban history and urban fabric. The building dates from 1889 and is associated with builder/designer Wilbur Boothby. By marriage the Greenbaum family was related to early brewer Sam Adolph, owner of the Adolph Block, where Wild Pear is located. The quilt is ornate and has many pieces!

Here's one piece related to transportation.

The last section of the Eldridge block can be seen in this photo circa 1940.  It extended all the way from Greenbaum's to the corner. Two of the central stairs also had towers over them. (The seven-window unit with the tower on the right side, the south end, is the only part that remains.)

Today most of the building's former footprint is the Chemeketa Parkade. Before that garage was completed in 1978, a department store wanted it for a surface lot.

The Downtown Historic District National Register Nomination (big pdf) has the story, and it's also related to a sale and transition:


In 1943, Adolph Greenbaum and Ed Rostein sold this building [Greenbaum's] to Roy Lockenour. Adolph rented space from Lockenour with the understanding that Adolph would have the first chance to buy the building if Lockenour decided to sell it. Adolph died in 1960 while on a hiking trip in Olympic National Park in Washington. His sister, Irene Depenbrock, then took over Greenbaum's Fine Fabrics. Irene's husband, Albert Depenbrock, eventually joined his wife in the Greenbaum business.

A few years later, Roy Lockenour told Albert Depenbrock that Lipman's department store wanted to buy the building and that they had agreed on a price, but he was honoring his earlier agreement with the deceased Adolph Greebaum and offered it to the Depenbrocks first. Albert took his time before telling Irene about this, not realizing that Lipman's intended to replace the building with an enlarged parking lot. After hearing this, Irene Depenbrock immediately went to the bank and successfully obtained financing. She then called Roy Lockenour, who was in a meeting with Lipman's. On December 9, 1966, he sold the building to Albert and Irene Depenbrock, thus preserving it for their future use.

The Depenbrocks' daughter, Sylvia, and her husband, Bill Dorney, bought the business on January 1, 1978. Bill and Sylvia worked together at Greenbaum's Fine Fabrics until 1985 when Bill left to become director of the Salem Downtown Association. Sylvia specialized the shop's merchandise further, changing the fabric store into a quilting fabric shop in 1988, known as "Greenbaum's Quilted Forest."

So here we are again.

Succession transitions are often vulnerable moments in the history of buildings.

Cheers to the Dorneys for retaining the building and keeping a business that's been going for over a century.

In the meantime, we're still talking about knocking down historic buildings for parking lots!

Howard Hall comes up on Monday at Council, and there will be more to say then. The Hospital has for many people successfully framed the matter as adaptive playground v. derelict building. Just today there's an LTE in which the writer says, "Why would we choose to keep a decaying building of no particular architectural appeal whose costs to repurpose are exorbitant over the needs of people who are often forgotten and overlooked?" It will require many voices to insist that the matter instead is parking lot v. historic building.

(There are more documents posted to the City Howard Hall site, including a legal opinion of "no big deal" on the Mayor's possible conflict of interest, a petition from area pediatricians, and more from the Hospital itself.)
Posted by Salem Breakfast on Bikes at 12:01 PM

Yesterday you made mention of the mystery warehouse which I assumed was the original building that Boise Cascade later took over. Anyway, it lead me to a Youtube video that my guess you have seen but thought others might not have. It is a tour of the property before they started the demolition and is a valuable piece of Salem history.

I really appreciate that someoen took the time to do this video, because like you point out in the Greenbaum story, we are losing so much of our history here in Salem.

The video is at http://www.youtube.com/watch?v=klHSLjW0Z7A

As an aside...I grew up in Salem and my ancestors go back to the first wagon train to take the Applegate trail to Oregon in 1846. They settled in the area and my mother grew up in Salem and would share memories of many things from the past, like the night the Capitol building burned and watching the metal dome glow in the night sky until it fell in on itself and later watching the demolition crew toss the pillars into Mill Creek by the high school ( NSHS)...

I am trying to piece together a family history with old records and photographs etc. Finding videos like this are rare and it is going to be so valuable for future generations to learn about our local history.

Everyone responsible for taking down these old buildings and replacing them with parking lots or one story cement block buildings should be arrested and financially responsible to replace what was lost.

Sadly this is what has happened throughout America.