Did you have a good Fourth of July? The local "bombs bursting in air" seemed especially loud, frequent, and nearby this year.


Here's Charles Ives' take on the holiday, circa 1912. If you don't know Ives' music, it's a jumble, sometimes discordant. In a wonderful review last month, Jeremy Denk calls him "the crazy and brilliant patriarch of American music, [one who] loved a good cacophony." He was a real "American Maverick" and, musically anyway, not appreciated during his life.

Ives is increasingly interesting here because he was composing during the streetcar era, that period from 1880 to 1920 or thereabouts when we probably reached peak mobility: People regularly traveled by foot, horse, wagon, bike, streetcar, automobile, rail, early air craft. Sure, petroleum-based fuels later let us go farther and faster, but we might have had the greatest range of mobility choice in this period.

There was a real transportation ecosystem - a jumble.

It wasn't all soybeans and wheat and clear-cut second-growth of one age.

We might not want to look at it with an uncritical nostalgia, but it deserves a closer and critical eye.

By now you've read the news in the paper that Council is "calling up" for review the decision of the Historic Landmarks Commission on Howard Hall. 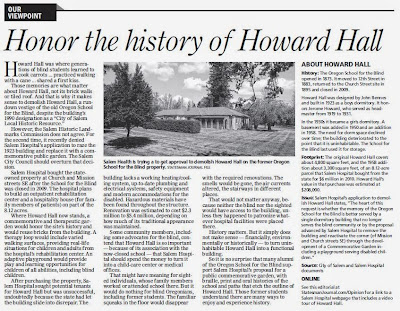 The Hearing Notice is out, and it looks like Bastille Day will be the occasion. A little poetic, no? 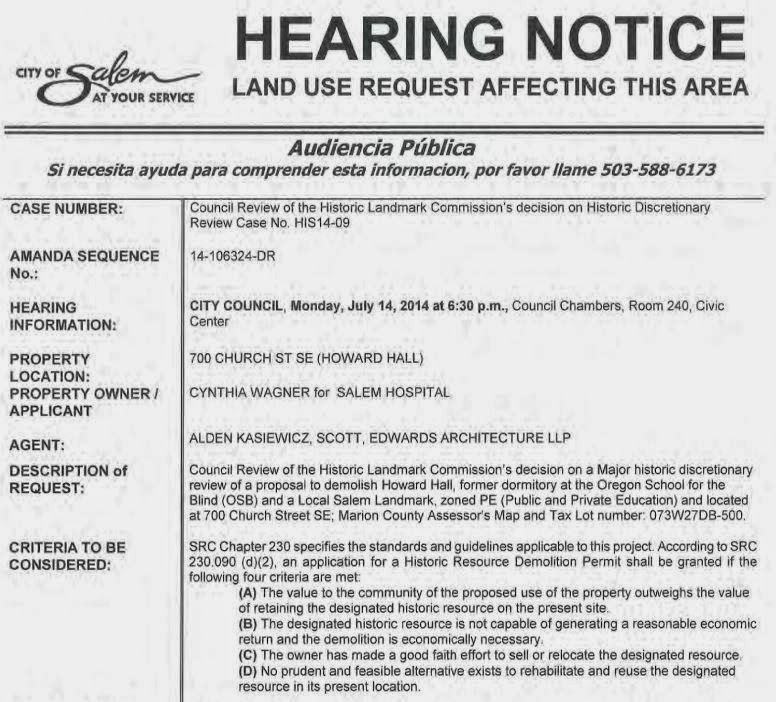 Last month there was a history note in the paper, and it turns out there's some relevant recent history in it. 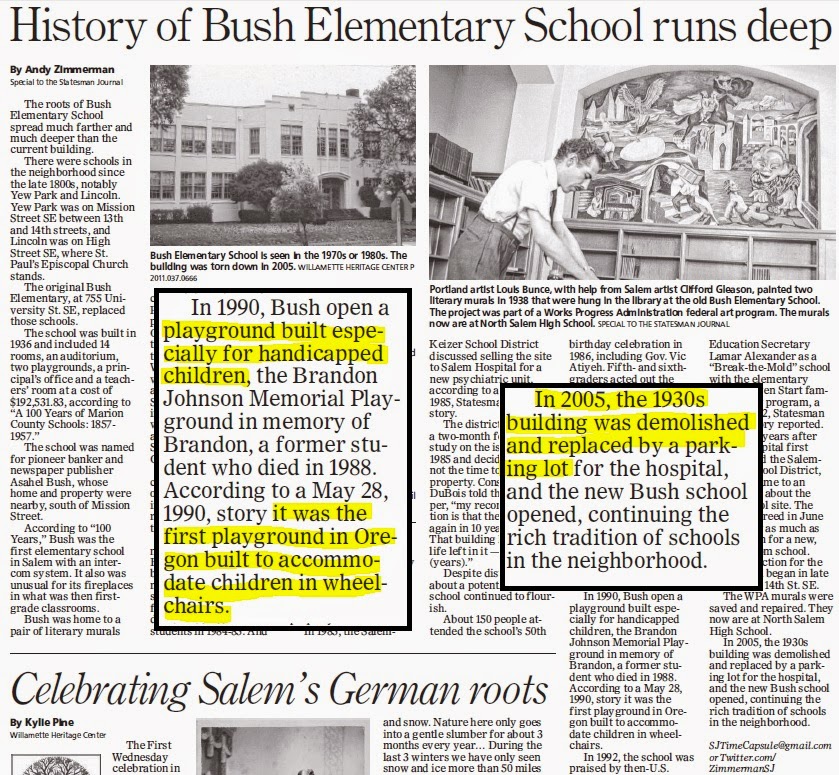 The Hospital has already demolished one adaptive playground for a parking lot!

You'd think that if the Hospital were so sure of the vast community value in an adaptive playground, they would have taken greater efforts to preserve the first one or at least to rebuild it elsewhere nearby.

But there's another history here. In the first round of urban renewal and hospital expansion, Salem lost a bunch of great old houses along Oak Street to the east of the hospital. A couple were relocated elsewhere in the city, but most were demolished.

The Albert House, in which Myra Albert Wiggins grew up, was another one.

The Hospital has a clear pattern of demolishing things in the neighborhood for its parking lots, clinics, and additional hospital buildings.

It's the soybeans, wheat, and second-growth of urban monoculture.

The same impulse, the same paradigm, in fact, that gives rise to antibiotic resistant bacteria - think about the parallels on micro- and macro-scales! It all started out innocently enough, but we've now learned there are big problems with the ostensible "efficiency" of systems that suppress diversity.

Yeah, diversity. On the Blind School parcel, there's still plenty of room for a playground and garden adjacent to a preserved Howard Hall.

We should remember that the plan includes an application for 87 parking stalls above the maximum permitted by Salem's already generous code. 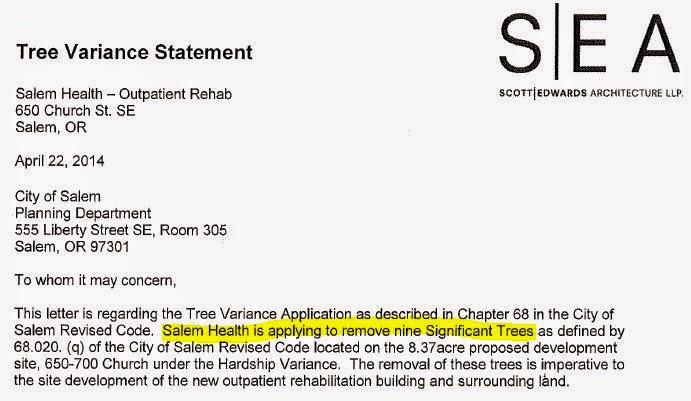 If the Hospital is serious about a playground, they can site it where the 87 stalls would go, preserving Howard Hall for future generations and turning back from an excess of surface parking.

Above it all, though, we should remember that cities are complex organisms, and like biological organisms and systems, they function best with elements of diversity and jumble. Long term success sometimes requires things that look like short-term inefficiency. 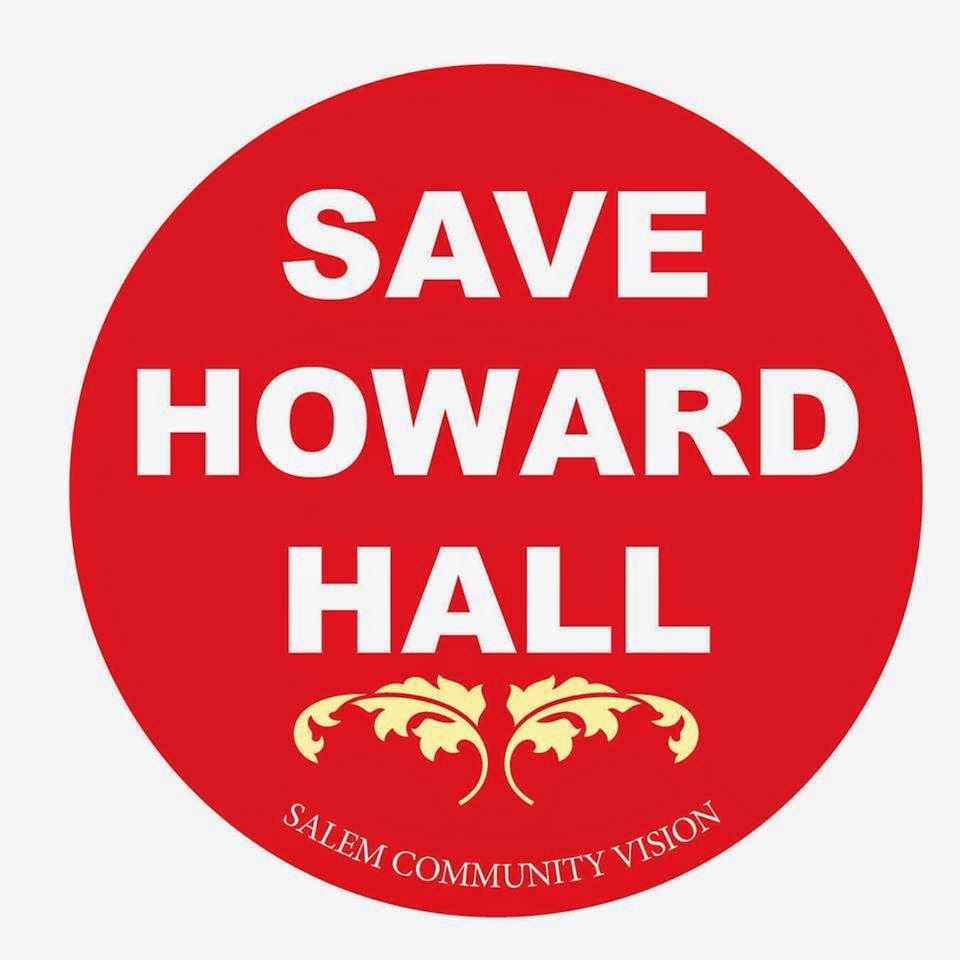 A monoculture of parking lots and cars, and of single-use institutional campuses, is harmful, in more ways than one.

Over at SCV they've got a button and are organizing more folks to come to Council.

The Staff Report is out and the City recommends reversing the HLC findings: 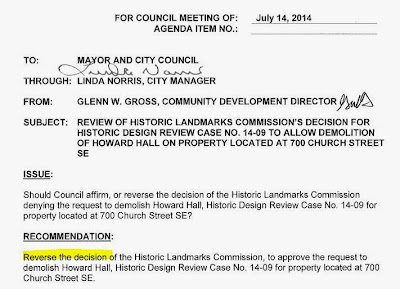 Updated with staff report and recommendation for Council call up.