Disconnecting the Dots on Climate Change


The transportation sector accounts for about a quarter of Oregon's greenhouse gases. A half-billion dollar project (and almost certainly more!) to make driving more attractive and convenient is probably not a useful part of how we want to fight global warming.

Also, in not how to fight global warming...

The Oregon Transportation Commission will meet Thursday the 17th at the Conference Center, and on the agenda is public hearing on the priority list of projects for funding with lottery dollars though the ConnectOregon V program.


There are no local projects on the final list. As we noted last month,


4 Bike/Ped projects got recommended for 17% of the total funding of $42 million. Aviation only got 15% and Transit 8%, so it's hard to argue that the there's any great overall disproportion.

Significantly, no Salem project was recommended. The top 37 projects are on the recommended list. The South Salem Transit Center was #50, the Kroc path was #55, and the Bike P0ds #76. 104 projects total were ranked.

(For notes on the whole process from start-to-finish, see notes tagged here.)

From a regional perspective, though, the Sierra Club "Beyond Coal" campaign notes that


The ODOT Transportation committee is on the verge of awarding Port of St. Helens 2 grants of $2 million each for two new docks (1M0294 Berth 2 & 1M0352 Berth 1) to enable Ambre Energy (coal trains and barges) and Global Partners (oil trains) to further their coal export and oil transport plans. Also on the table is a grant of $3 million to the town of Ranier for “rail safety” infrastructure (1R0350), so that more oil trains can move faster through the town. These are public dollars raised from the Oregon lottery for Connect Oregon.

Connect Oregon funds non-highway transportation projects. Communities compete for limited funds from this program. If these three proposals are approved, bicycle, pedestrian and other worthwhile projects would be edged out in favor of projects which subsidize the expansionist plans of the fossil fuel industry. A final decision will come in August, This hearing will be our chance to weigh in and voice opposition to these three proposals.

On the one hand, no one should be surprised by this. The ConnectOregon program was set up for rail, air, and marine transportation, and certainly the air component has never been an ally of efforts to reduce carbon. This is a program for big industry, often big polluting industry. In this, the fifth round, a bike/ped/bus component has been grafted a little awkwardly onto it. The bike/ped/bus projects actually did get a fair share - as the program was structured. (I think it's a little misleading to say that bike/ped projects would get funded if you killed the coal/oil projects. Other projects are probably ranked higher and would slide in.)

But of course the program is disconnected from any larger aims we might have about greenhouse gas reduction. (In this regard, actually, it's a darkly ironic and poetic use for video poker and lottery dollars just lit up and burned, gambling loss on a personal level, climate loss on a regional and global level. Our State deserves better funding mechanisms for valuable projects. The Salvation Army has this one right.)

What is needed is not so much to kill these projects, though that also would be a worthwhile end, but for greenhouse gas evaluation to be part of ConnectOregon VI in ranking and funding the next round. And that's a Legislative project with ODOT.

That's what the Sierra Club should probably be working on.

The hearing starts about 1:30pm on the 17th. If you'd like to attend and testify, RSVP to Hans West Salem Beyond Coal (westh3@gmail.com) copy RSVP to Laura Stevens Sierra Club Beyond Coal (laura.stevens@sierraclub.org) 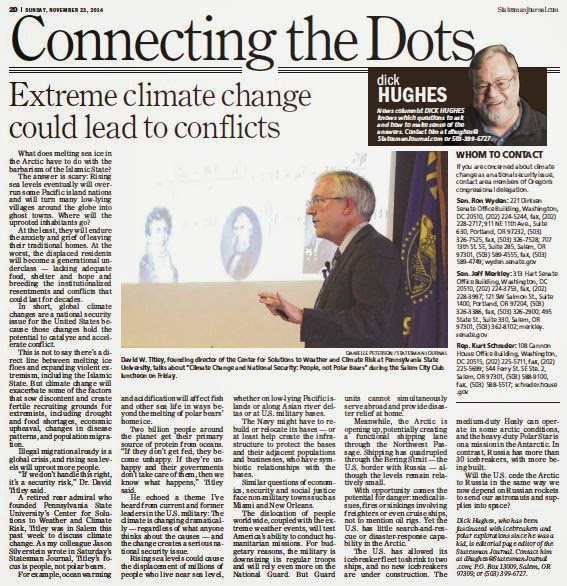 If you can't get to the ODOT hearing on ConnectOregon funding, written testimony can be submitted through July 25 to: ConnectOregon@odot.state.or.us
or via hard copy to: ODOT, Attn: Chris Cummings, 555 13 St. NE, Salem, Oregon 97301.

The coal project was dropped, but the two oil projects moved forward.

"Voting in the majority to delete funding for the Berth 2 project were commission members Dave Lohman of Medford, Catherine Mater of Corvallis and Alando Simpson of Portland.

“I think we have an obligation to ask ourselves if we are approving projects that would limit the ability of future generations to meet their needs,” Lohman said in a recording made available by the ODOT staff.

Mater said she had no problem with funding for two other related projects that drew criticism.

But the ready-to-go status of the Berth 2 project, Mater said, “is where I begin to get some heartburn.”

She said unlike the Berth 1 project at the Port of St. Helens, which would ease oil shipments, the Department of State Lands has raised questions about the Berth 2 project â€“ and that commission members became aware of those concerns only after the July 17 hearing.

Baney has a public health background, and so it's interesting she accepted coal. It's also interesting that she apparently made explicit the notion that the OTC is not to exercise independent judgement in the final approvals.