On Council agenda for Monday is very little of direct interest here. There's a couple of second reading of ordinances that have already been discussed, that sort of thing.

So this will meander more than a little.

One of those matters is the first reading of the ordinance to vacate remnant alleys and streets at the Blind School. So let's talk about that in an indirect way. 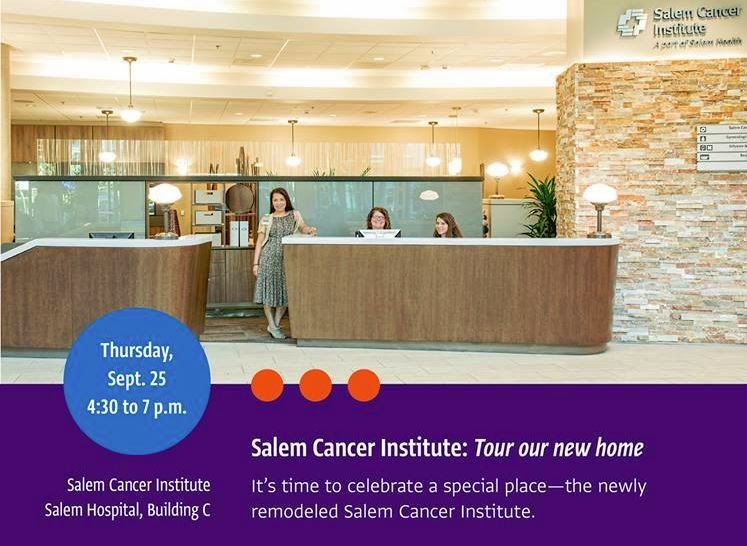 But the Hospital was conspicuously absent in press or public conversation about James Sallis' talk, "Rx for Better Health."

Maybe this shouldn't surprise us given their commitment to drive-alone trips and car storage.

The bias for treatment over prevention - does this qualify, maybe, as a bit of rent-seeking? - is a huge structural problem in the way we deliver health care. Cancer treatment is far more lucrative and prestigious than promoting basic activities like walking that retard rates of cancer.

As long as you have ill people, we have services to sell!

Healthcare funding and delivery is a far bigger topic than we can take on here, so enough on that.

But it is interesting that OHSU, with whom Salem Health has been taking about a merger or acquisition or something, manages to have a much stronger transportation options program.

OHSU is in fact a "gold" level bicycle friendly business!

Unfortunately the main reason is maybe not so altruistic:


Traffic and parking is limited by the topography of our hill and river campuses. To ensure patients can access OHSU by all means, our employees and students have gone above and beyond in diversifying their means of travel to OHSU. Diverse modes of travel serves OHSU’s frontline mission to offer the best possible patient experience and OHSU’s wider mission of community health.

The Blind School parcel was, likely, too cheap. So there's no financial incentive for the Hospital to think about something other than vast lots of free parking.

This is an important reason why the regulatory checks offered by City parking maxima are important. In no small part because of free parking, we have a market failure, and a regulatory agency must step in.

The EOA-HNA has been talking some about infill, and one of the stray topics has been ways to make it easier to put duplexes and triplexes on existing land zoned for single-family residences. (Zoning really makes my eyes glaze over, so if you want to expand on this, correct, or clarify in the comments, please do so! I will amend any text as necessary.)

There's a slightly interesting Planning Administrator decision on a partition of some "land that time forgot," a rural, orchard remnant in a neighborhood that has been developed for around a half-century.

You may recall from Bike and Walk Salem talk about a "donut" of missing sidewalks. Land on the streetcar grid from the early 20th century had sidewalks, and land developed in the 1980s and beyond has sidewalks. But land that was developed mid-century as unincorporated county land and later annexed into Salem - this land generally lacks sidewalks, and forms a ring around the center of the city.

This parcel is in that land, and as you can see from the pictures, it lacks sidewalks. One of the roads has minimal shoulders, but not sidewalks, and the other road is a narrow, barely-paved country lane.

So in order to develop the land, the half-street section of Ratcliff fronting the property will need to be improved to "local street standards" with a 30-foot cross-section.

The picture here is from the Transportation System Plan and is not from the Design Standards document.

Hopefully the specific improvement on Ratcliff will call for sidewalks within the 30-feet improvement and not just insanely wide 15-foot car travel lanes, which induce speeding, a special problem in residential areas with curvy streets like Ratcliff. It's hard to imagine any reason the travel lane on a local road needs to be wider than 10 feet.

The downside is that if a sidewalk is built, it will terminate abruptly, just like this one on Lone Oak.

Pheasant calls for a 30-foot improvement as well, but it's a super-low-traffic lane, and City Engineering makes a defensible judgement that a minimal 22-foot improvement is sufficient. But a sidewalk may not be in this, alas. And even 22-feet seems like it might be bigger than necessary given the hill and concomitant slow speeds. More sidewalk, less auto travel lane!

Apparently there's a full 60-feet of ROW already dedicated, so the "yard" here encroaches quite a ways into public land. I don't know that this matters, but it is interesting. 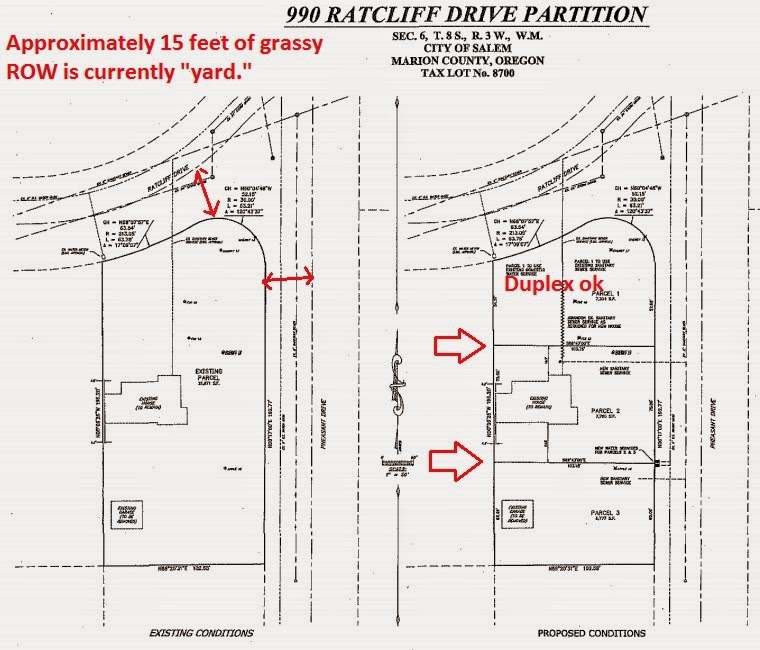 Finally, the new corner parcel will be able to have a duplex, which is permitted in current RS zoning. I wonder how often this tool is used by developers?

Not on Council agenda, but also an interesting corner lot, is a hearing notice for three lots on the corner of Kingwood and Second Street in West Salem.

The Edgewater Action Plan calls for housing and mixed uses along Second Street, but a business owner wants to rezone the existing homes for "Retail Commercial."

Don't have a strong opinion here yet, but if the City hopes to redevelop the area as a walkable commercial district, this could have implications. It'll be interesting to watch.
Posted by Salem Breakfast on Bikes at 11:38 AM

The concept of encouraging duplexes and triplexes in subdivisions is an easy way to increase residential density without having the impact that a concentration of such housing can bring. The City looked at the issue in the 1990s and made it an option on corner lots. My suggestion would be to either require it in subdivisions, or to create an incentive to have them located at least on a percentage of each subdivision.

Bu simply adding this requirement we could reduce the need for more RM land.

I strongly urge that the City look at allowing small mixed use lots too where a family might have a house above their business in a commercial zone. This was done as a common practice in other cities and makes sense in certain places in Salem. I can see Lancaster Drive hosting some of these types of businesses. One business, one home above can stand alone too. This way the investment is less and the family can operate the business. Having 24 hour presence can help with security issues.

I saw this great video recently that shows some really good ideas not only about walkable communities, but also about how to promote new businesses. http://www.youtube.com/user/1standMain

The part I liked was where the city set up spaces for very low rent so that people could start small businesses. Then if they were successful, they could move to a regular brick and mortar building withint the city center. A great way for people to get started at a low cost.

Food carts help the local economy by helping people start out small, but this would work for people wanting to start other kinds of businesses.

Kioskes in the mall are sort of the idea, but this is more clustered together. One of Salem downtown buildings that are now standing vacant could be a good site for such a venture.

The picture of the hospital parking speaks volumes. Why do they need so much parking? Why would they need more? It's bad planning.

Here's a density anecdote. In Keizer the Planning commission voted to support Cottage Cluster development. It's a laudable idea and was brought to them by city staff. The problem is that the lot has to be at least 30K sq feet and of course each 1000 sq foot unit must have a two car garage. I argued that this goes counter to what this type of development is for. It should be on smaller in-fill lots with a smaller off-street parking requirement, if any. Otherwise you're just creating housing at the edge for the type of people who don't want that housing and those that do are forced to drive more.

"As long as we have ill people, we will have services to sell"

Dr. Sallis made the same point. I don't think it really is sinking in with Linda Norris though. If she really beleives what she says, she hasn't been very effective. Her staff has been very effective at undermining her interests in a healthier Salem. Thats a serious leadership problem that no amount of advocacy is likely to overcome.

We have all the policy we need to prevent what the hospital is doing. We just don't have people in governement that are willing to follow it.