News this morning is that a second person has died in the crash the other day that first killed Oregon State Hospital psychiatrist Steven Fritz.

Cary Marie Fairchild died as a result of injuries sustained in the crash. 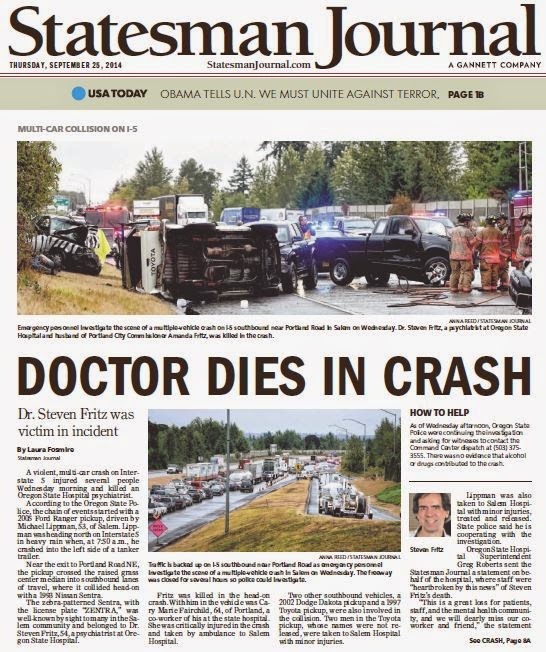 The crash appears to have been preventable. A cable barrier has been set to be installed at the crash site, and the barriers appear to have a significant affect on cross-overs.

But according to a recent article in The Oregonian, the Newberg-Dundee bypass and Woodburn I-5 interchange expansion sucked up resources that would have been used for the installation:


In 2011, a small pot of money became available [for the cable barriers on I-5] when a Corvallis safety project was canceled. [Tim] Potter, the ODOT manager wrote on Jan. 12, 2012, that construction on the I-5 cable barrier project should begin in the summer, bringing the section into "compliance with current ODOT standards."

But in June 2012, ODOT officials postponed the project because there were not enough resources, Potter said. The reason: The Jobs and Transportation Act of 2009, a massive $800-million spending bill adopted by the Legislature to raise the state gas tax and DMV fees in the name of creating 40,000 jobs.

The headline-making law promised that specific projects coveted by lawmakers would be completed on tight timelines. Specifically, the Newberg-Dundee bypass and Woodburn's I-5 interchange took up money and staff that otherwise would have gone to the I-5 safety project, Potter said.

"The Legislature provided the money for those but there was also a time commitment," he said. "Those two big projects just dominated the resources. In fact, on Newberg I still have resources tied up."

When we consider projects like the Third Bridge/Salem Alternative, we should consider the opportunity costs: Money and time we spend on capacity increases are money and time not available for safety improvements.

Friday night in the seven o'clock hour, right in the gloaming it seems, three reports of drivers crashing into people on foot came in. 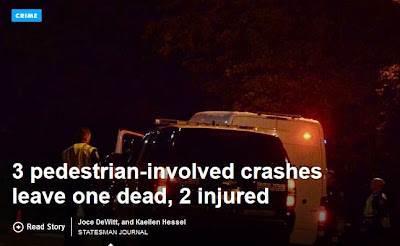 A person in a wheelchair was hit on Liberty:


A woman in a wheelchair was heading west across Liberty Road S at Browning Avenue S when a vehicle turning from Browning Avenue onto southbound Liberty struck her, Lt. Dave Okada said.

An elderly man was trying to cross Commercial Street SE at Ratcliff, right by the old Safeway, where Commercial is five lanes, there is no marked crosswalk, and the nearest crosswalks with lights are at Madrona and Vista, 2000 feet or more apart. No additional news about citiations or fault was released.

Finally, a person died when a driver hit them on Center Street at Illinois NE. There is an adjacent pedestrian median with marked crosswalks, and Center Street here is only one lane in each direction with a center turn pocket, though east-bound as it approaches Hawthorne it flares to multiple lanes, and sometimes the west-bound merge induces zooming as drivers try to be first in line. Additional relevant details will surely emerge on this. 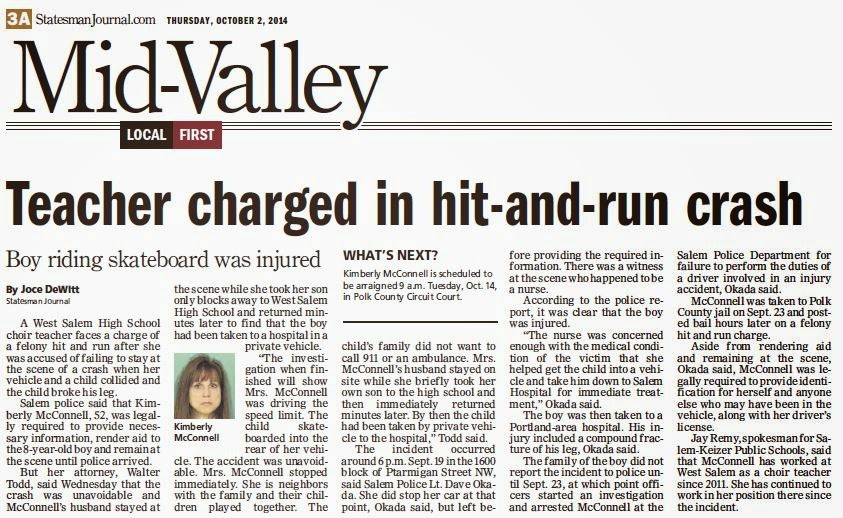 Talk about additional relevant details...Boy, there's lots we don't know about the hit-and-run in West Salem a couple days ago, and it does not appear to be a simple instance of plain flight after a crash. The whole thing looks complicated.

But it is very interesting that the urge to drive one's child just up the hill to school seemingly trumped the urge to stay behind and render aid and assistance to an injured child.

The husband not involved in the crash couldn't walk the child up to school? Maybe the child's disabled, and needs driving.

But apart from details about who should have done what, and what existing friendships may have been honored or trampled upon, this is also a story about the pervasive autoism in driving one's child to school.
Posted by Salem Breakfast on Bikes at 10:00 AM

ODOT was negligent. Lack of funds due to other projects is just an excuse. In 2006, there was a major widening and improvement project that should have included the cable and post system. ODOT had been sued a few years earlier after another fatal crossover accident occurred. They then announced that the system is "cheap and effective". They used the raised berm, which was known as the most dangerous configuration because is tends to "launch" vehicles and prevents drivers that are about to "meet" crossing vehicles from seeing their approach as early as they otherwise would. In the last 10 years, there have been 22 crossovers and high speed crossover accidents are the worst kinds of accidents. If ODOT wanted to install the system, they could easily have done so.

Great post SBOB. Thanks so much for all you do. You are one of the best investigative reporters in town and you do it for free. We really appreciate that.

Jim: I'm curious what, in the eyes of those councillors, makes this 4D lite. The only difference I can see is the lack of the "signature bridge design". Functionally it appears exactly the same as the Salem Alternative (which was 4D lite to me).

Curt, I thought the Salem Alternative was 4D Lite too. I think these particular Councilors thought they were voting for a small, local bridge instead of an expressway. The Sellwood Bridge came up often in their conversations as a model. But that is definitely not what Keizer, Marion County and Polk County representatives on the Oversight Team want. They still openly talk about an "expressway" and so that's what we are getting from the Oversight Team at the moment.

Here's the paper's update on the fatality on Center at Illinois:

"The man who was killed after being hit by a car on Center Street NE Friday night has been identified by Salem Police as 58-year-old Norberto Sonahua-Arguelles of Salem.

According to Lt. Dave Okada, 66-year-old Maria Griest was driving eastbound on Center Street NE. When she was between Vinyard and Illinois streets NE, she struck Sonahua-Arguelles, who was apparently in the road.

Okada said there was no indication he was using a crosswalk.

There have been no citations or arrests at this point.

Sonahua-Arguelles was pronounced dead at the scene. It is unknown why he was in the roadway."

RE: Choir Teacher in West Salem

"A West Salem High School choir teacher will not face felony charges after a Polk County grand jury declined to indict her...

McConnell's attorney Walter Todd said in a public statement that the incident was unavoidable as the boy, riding a skateboard, collided with the rear of her vehicle. She stopped immediately and when the boy's family did not want to call 911, her husband stayed on the scene while she took her son to the high school and quickly returned to find that the boy had been taken to the hospital....

conflicting testimony of the witnesses prompted the case to go before a grand jury. They reviewed the case for two weeks and on Monday they concluded prosecution....