The weather looks great for wheeling this weekend! It's a great time to think about history as you're out and about. 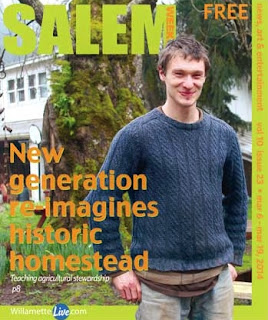 Back in the spring, you might remember from Salem Weekly the piece about the transformation in process at Geercrest Farm.

Next week on Monday the 6th at Mission Mill, folks from Restore Oregon will be holding a "preservation pub," talking about places like the Geer farm - pioneer-era farms, houses, and homesteads.

The talk arises out of the work for their annual list of "Oregon's Most Endangered Places," and this past year the remaining pioneer homesteads in the Willamette Valley were included as especially at risk.

These buildings from between 1840 - 1865 are often deteriorating, are generally out of the way, and ultimately are irreplaceable.  Once they're gone, they're gone, absolutely gone.

The Geer farm from 1848 is lucky to have a non-profit and education project behind it. A few other homes have been relocated to Mission Mill or other places in town. The McCulley House is fine example of one that's been moved and restored. Other houses have been modified and are a little camouflaged, so to speak.

You might not immediately recognize the "Edes" house. Today we call it the Smith Fry House, and it's at the top of Gaiety Hill, right by the Library.

A while back the folks at Mission Mill put together a map of buildings and places in Salem that date to this period - and there's more than one or two.

The ones in Salem are mostly in good shape. Other farm houses farther out are not so fortunate: the Phillips House needs help and some, like the Waldo House, are even dilapidated and could collapse soon.

The Preservation Pub is at 5:30pm on Monday the 6th. Restore Oregon is asking for a $5 donation at the door. Drinks will be available for purchase, but there's no info on what they're pouring.

As we think about other threatened buildings like Howard Hall and the Belluschi bank, a new study reminds us that old buildings and mixed-vintage development are usually more effective economic engines than homogenous new construction.


the Preservation Green Lab research team overlaid a 200-meter-by-200-meter grid over the maps of the study cities, and all data was built into this grid structure...Using statistical models, the research team explored the roles of building age, diversity of building age, and built granularity in explaining variation in economic, social, and cultural vitality. The team also combined data on key characteristics of building fabric into a composite “Character Score” that served as a single measure for testing the role of older, smaller buildings and mixed-vintage blocks. In order to statistically control for other key predictors of vitality, the models accounted for private investment in construction, median income, and transit accessibility.

This study demonstrates the unique and valuable role that older, smaller buildings play in the development of sustainable cities. Based upon statistical analysis of the built fabric of three major American cities, this research finds that established neighborhoods with a mix of older, smaller buildings perform better than districts with larger, newer structures when tested against a range of economic, social, and environmental outcome measures.

A diverse ecosystem of buildings is better than monoculture by a number of different measures, including job creation.

Readers of Jane Jacobs won't find much new here, I think, but what they will find is a more sophisticated set of data and robust correlations.

This dovetails with the Strong Towns analysis of building style and property tax generation.

Low-rise buildings on big parking lots are bad news all the way around.
Posted by Salem Breakfast on Bikes at 7:00 AM