Is Alternative 2A really that much better than the Salem Alternative/4D?

Over at N3B, advocates are talking up Alternative 2A, which widens the existing Center and Marion Street Bridges, as a "compromise."

The one clear advantage of it, is that if adopted, it would be easier to modify or dial-back in ten or twenty years as conditions change. It is much more revocable than the others!

But is it truly better?

Here are some of the real trade-offs for people who are not driving cars.

Maybe the biggest one is the loss of the path along the Center Street Bridge. This would shunt all people who are walking and biking across the river to the Union Street Railroad Bridge. If you are coming from Edgewater, or if you are a speedy, confident cyclist, this removes the most direct route and imposes a good bit of out-of-direction travel.

The out-of-direction travel is even more aggravating for people on foot, for whom the deflections add several additional "block equivalents" to travel time.

At Union and Commerical, this alternative might also undo some of the intersection work that is scheduled for 2017 (and maybe also 2018) to make an easier crossing. 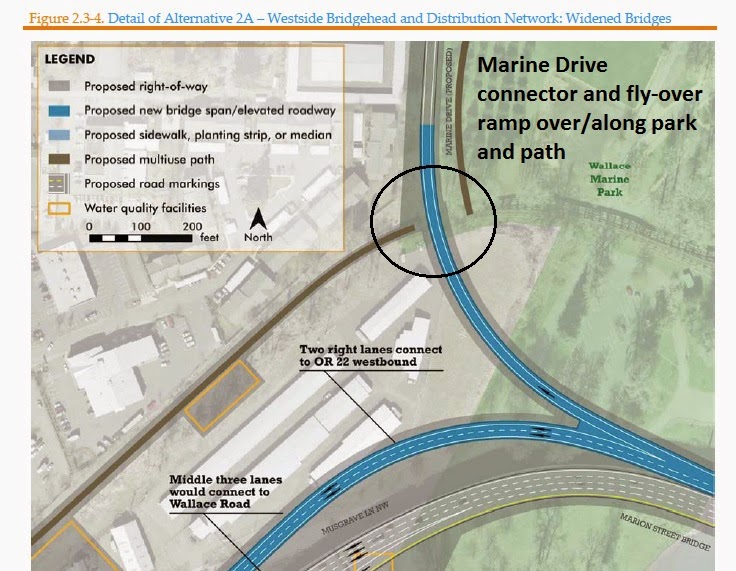 The Marine Drive connector imposes a large ramp directly over the westside trestle for the Union Street Railroad Bridge and runs alongside the path to Glen Creek Road. 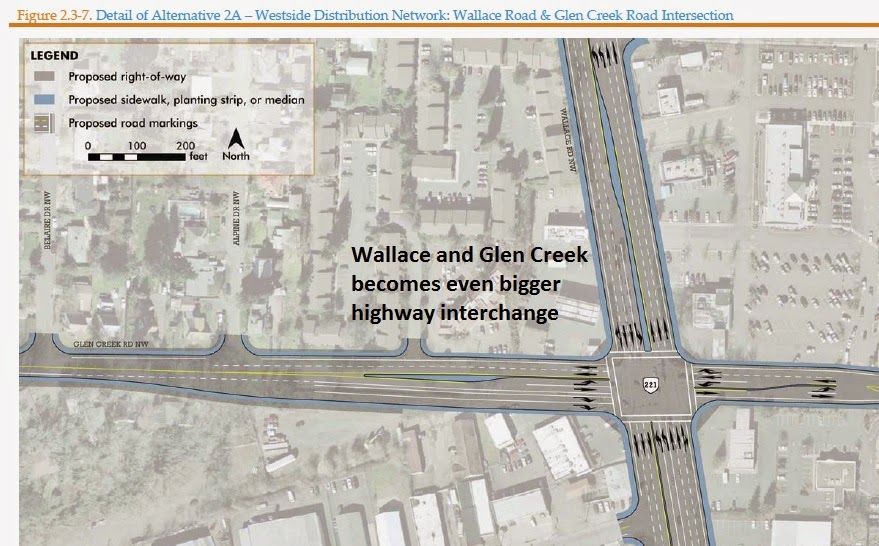 It adds yet more lanes to Wallace Road and makes it even more vast and forbidding to people on foot and on bike. It's a major dredging operation! 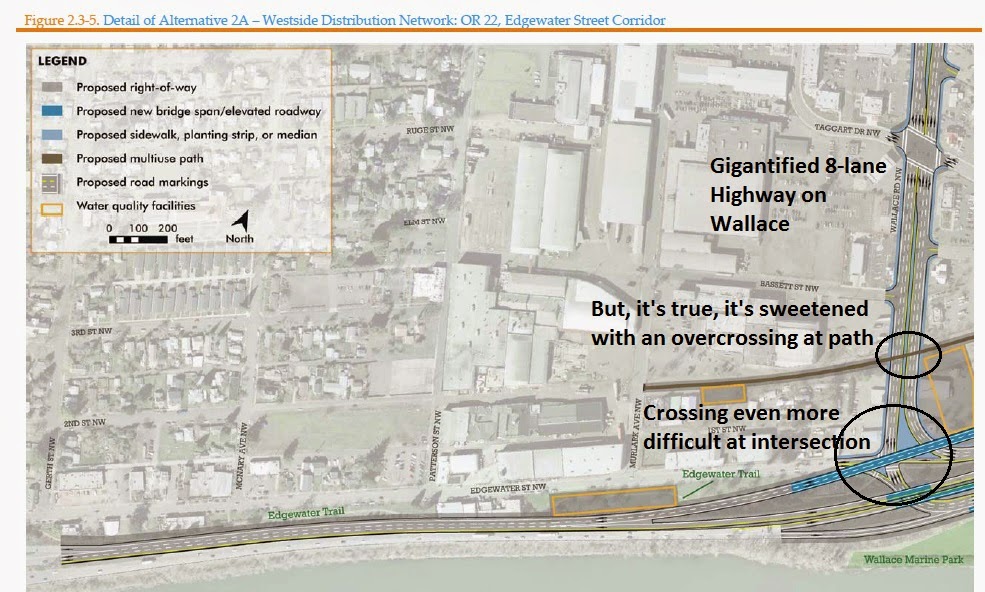 It also makes crossing Wallace at Taggart and at Edgewater more difficult.

Though the thing could be sweetened by the addition of an overcrossing at the RR right-of-way.

This is complicated, however, by the fact that the ROW on the other side has a contested ownership, and Oregon Fruit, the adjacent cannery, is no longer owned by a Salemite. Working out a path connection through to Second Street might be even more difficult than it seemed. A connection to the Second/Edgewater district also doesn't help people coming from Glen Creek and points north, who must still navigate Wallace/Highway 221 and its massiveness.

Some who favored some kind of low-build option (excluded early in the process) did end up giving 2A limited support as the "least bad" of the high-build options, so it is in the end not unreasonable for N3B to call it a "compromise." It would indeed be easier to tinker with and alter as conditions and cultural norms call for changes. At the same time, in the final vote, it did not fare well.

If we accept the "hour-glass" or "waist" where the river channel narrows as the optimal place for a crossing, maybe too we will accept the fact that this narrowing is a real constraint and that the nature of the bottleneck calls not for more auto capacity but for more human capacity, which should entail much more robust facilities for people who walk, bike, and bus.

Otherwise it still just represents a massive dredging operation on the roadways, and makes it more difficult to make connections for people who aren't driving cars.

For more discussion, the Task Force conversations about 2A are interesting. Here are some of the relevant memos. The first two are from the elimination brackets with two alternatives set side-by-side and compared.

If 2A gains traction as a way to dump the Pine-Hope alignment of the "Salem Alternative," perhaps we'll revisit these in more detail.
Posted by Salem Breakfast on Bikes at 7:00 AM

SBOB, thanks for your detailed critique of Alternative 2A. But the answer to your question, "is it much better..", is definitely yes. The Salem River Crossing project, having been underway since 2006 and having spent $7-8 million to date, is going to push ahead to a conclusion. We at NO 3rd Bridge think that conclusion should be Alternative 2A or some variation on Alternative 2A, clearly the best of the "build alternatives" in the DEIS. Our elected leaders need to quit fantasizing about a 3rd Bridge that we simply can't afford and get back to looking at how the bridges we have can be improved. It is particularly important that at least one of our existing bridges be retrofitted to survive the next Cascadia megaquake, and we think this objective can be worked into Alternative 2A. We agree that Alternative 2A has many problematic aspects, particularly for multi-mode transportation. But it is by far the best of the build alternatives in the DEIS, and the Salem City Council should acknowledge this and recommend strongly to the Oversight Team that they change course and select Alternative 2A as their new preferred alternative.

The strengths of 2A also make it the most likely to be funded and constructed:

It can address the seismic deficiencies.
It does most directly address the stated problem of traffic demand to the CBD.
It is a stronger candidate for federal funding.
Its price tag is within reach.

The big advantage of it is that it removes the "cloud" from the Highland Neighborhood.

The Salem Alternative or 4D lite or whatever you want to call it seems to me to be a pipe dream in the context of transportation funding realities of the 21st century. 2A seems much more realistic and within reach.

If "No Build" is the desired outcome, the Salem Alt. is more likely to produce it than 2A.