In my bikey Utopian fantasy, there might be things to criticize in the Refinement Plan proposed for the Eric Olsen development at Fairview.

But since we live in Salem, it's difficult to find fault with the plan. It will be very interesting to learn if representatives from Pringle Creek Community, Sustainable Fairview Associates, Simpson Hills, or the Morningside Neighborhood Association find much substantive to critique. There are a number of technical details on the way the jigsaw puzzle fits together at the seams between different developments, and these seem like the most likely place for revisions.

Overall, though, from here it looks like a realistically optimistic and progressive plan that yet doesn't get too far out on front of the actual market in Salem. It's hard to see a reason this wouldn't speed through the approvals process. (Do you see something?)

Maybe the first thing that stands out is the proposed order of development. Pringle Creek started inside, near Painters Hall.

Fairview Addition starts outside and works in. 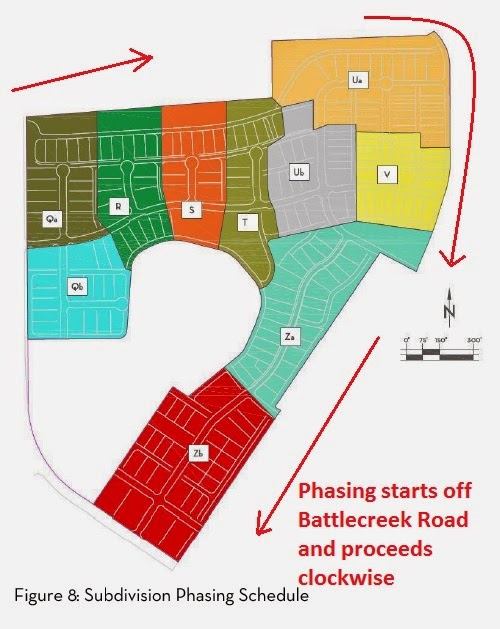 The proposed phasing commences with group in the northwest corner, adjacent to Battlecreek/Pringle Road and the existing new development at "Copper Glen." Roughly speaking these are the most conventional, lowest-density lots and houses.

The more interesting, higher density stuff is tucked further in, and appear to be leveraged by success with the earlier, more conventional development. 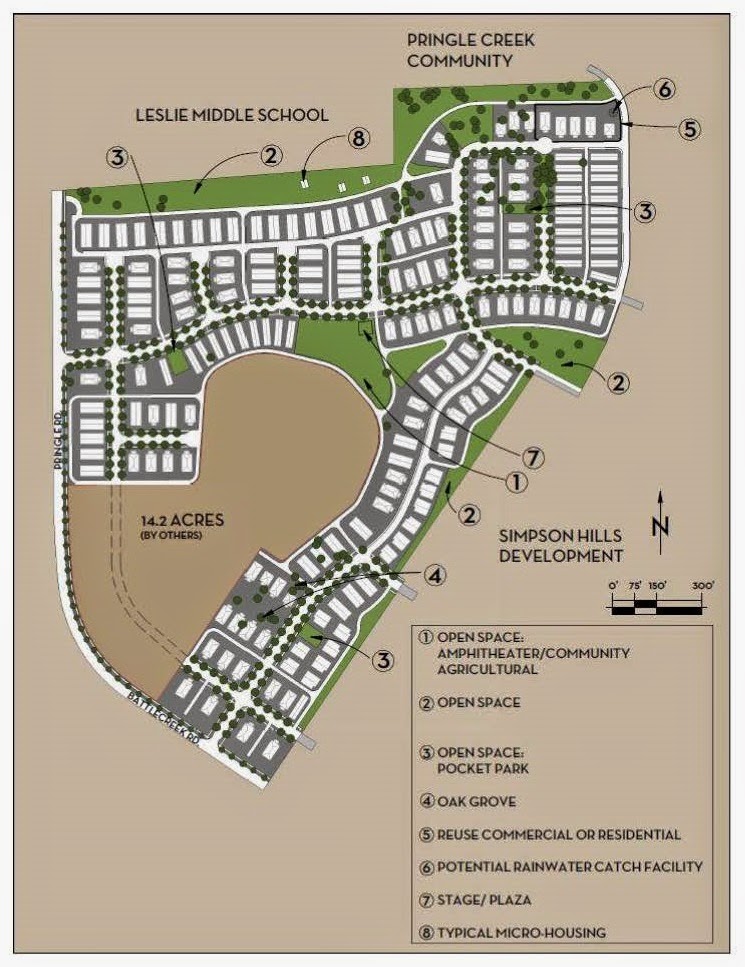 
[our goal] "is to build communities with homes that vary significantly in cost, size and lot coverage in order to establish a neighborhood for many demographics. The Fairview Addition plan includes flex houses, ADUs, three and four-family residences. These provide housing options for the elderly and single as well as rental opportunities for low-wage families. Many custom single family home designs are available for buyers of means and cottage clusters will provide a location for communities of interest....

Depending on market conditions, homes on the eastern side of the property close to and within the VC [Village Center] zone will cater to more urban and intensive live-work options with great population density....Ground floor retail will only be allowed within 150 feet of the VC area....

Introduction of a micro-house model further promotes sustainability and affordable housing...[these homes will feature] a limitation of the building footprint to 450 square feet."

The reuse and demolition plan doesn't entirely make sense - not that's it's necessarily wrong-headed, but that maybe there is not sufficient discussion of it, at least for those of us on the outside looking in. 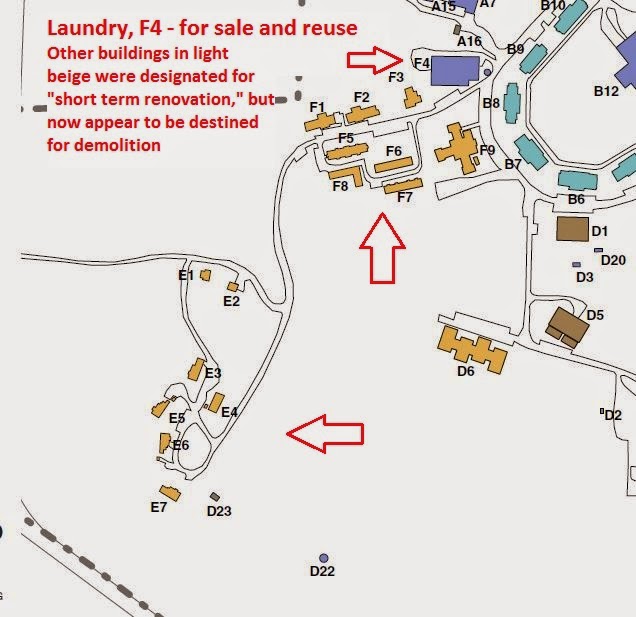 Houses E1 and E2 have received permits and are goners.

But there's a whole cluster of "F" and other "E" buildings that are designated for "short term renovation" in the Master Plan, but which appear to be demolished in the Refinement Plan

One building, the "laundry building," F4 on the map, is for sale and the Refinement Plan hopes to accommodate its preservation, renovation, and reuse.


The intent is to find an end user to purchase the laundry building and repurpose the structure for multiple family or commercial use, complementary to this mostly residential area...Because of the laundry building's clear span roof structural system the building offers many reuse possibilities.

Not a building, but even more interestingly, there is a possible petroglyph nearby:


Site 5 on the Cultural Resources Inventory map, located very close to the Refinement Plan area, shows a boulder approximately 240 cm long, 120 cm wide, and 75 cm tall. This site is considered to be in good condition and is eligible for listing on the National Register of Historic places as it potentially possess rare rock art from the Willamette Valley. Although located close to the Refinement Plan area, further research has shown Site 5 to be outside of the Fairview Addition property line. It will not be damaged during construction of this development.

As I read it, however, The Historical Resources and Inventory report doesn't clarify whether it is an indiginous pre-settlement petroglyph, early settlement graffiti, or even just 20th century vandalism.

It's a pleasant mystery!

The streets have curbs and swales, and appear to use regular asphalt rather than handle drainage through permiable surfacing, as Pringle Creek ultimately did. The curbs may be a consequence of the hillier terrain. The streets are not super wide, however.  (Any Engineers know more about this?) 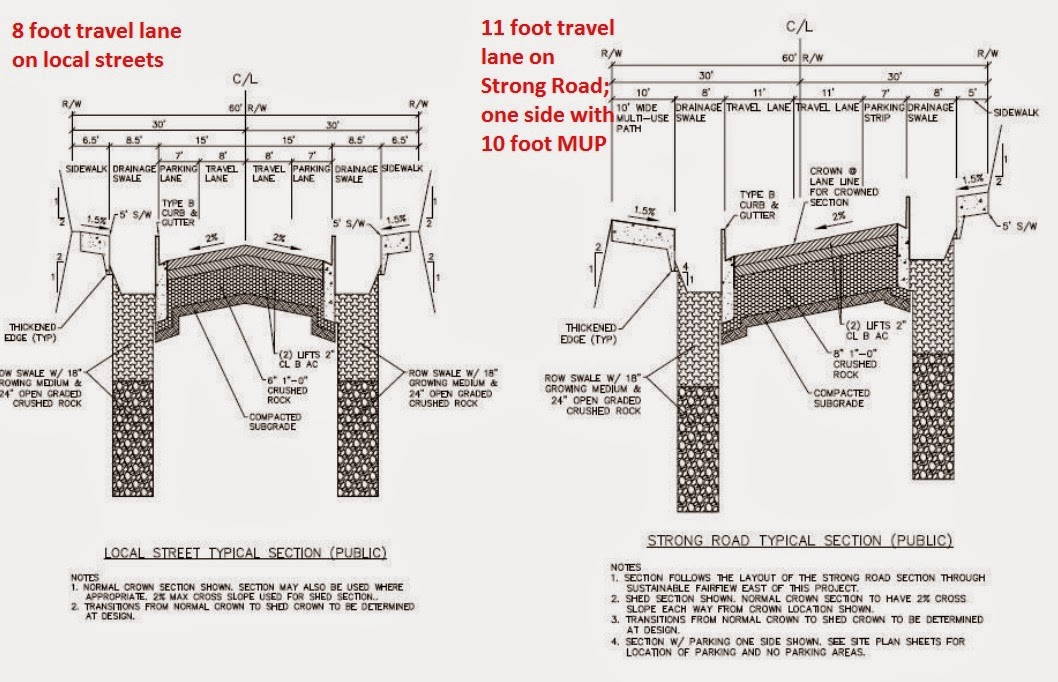 The street plan calls out one street in particular for a Dutch-style treatment and the developer intends to be generous with allowances for things like food carts if the demand is there:

The alleys and private streets add connections for walking and biking beyond the sidewalk system, and it looks to be pleasant and easy to bike. (See image at top!)

But the caveat, of couse, is that while internal circulation will be easy, as soon as you hit Battlecreek, Madrona, Fairview Industrial, or Reed, the idyll is over. There will need to be restaurants, groceries, and other light business in a meaningful concentration inside the boundaries of the total Fairview development in order to be able effectively to substitute bike and walk trips for car trips. The commercial districts will be developed in later phases, so in the initial phases, the bike comfort level will be a little like that at a resort, more for toolin' around than for going places and running errands.

The housing densities appear to be on the low side of the ranges expected in the Master Plan. This is one of the places where the realities of the Salem market may be most clearly underlined.

Outside of Fairview in the wider city, the trip and traffic analysis leads to some puzzles.

The whole thing they expect to add some 10,000 car trips.

Among the projects the analysis envisions are necessary:
It will be necessary to learn more about these, but on the surface they look like unnecessary gigantification, not at all consistent with the "sustainable" transportation goals of the development. The numbers have been reduced by 10%, a swag at the overall trip reduction and multi-modal effectiveness - but if after the thing is fully built out, if all we have to say for it is a 10% reduction, that must count as a failure in "sustainability."

If there's a project on which the traditional trip modeling and LOS analysis should be tossed for newer multi-modal analyses, this is it! A 21st century development is using Eisenhower-era analytics, and that seems wrong.

Others may find the stormwater and tree plans of interest. The tree plan identifies "significant" trees and of those, only two in the very last parcel to be developed are identified for removal (as the market develops things could change, and maybe they could even be saved). All other "significant" trees would be retained. That seems pretty reasonable.

Overall it seems like you have to drill pretty far into details in order to find much to quibble over. At higher level of generalities, the plan seems apt and reasonable. So it will be very interesting to read and hear what others have to say, especially in the way of critique.

What are your thoughts?

The Staff Report and recommendation is supposed to come out next week some time. Look for another post after it is out. See here for previous notes on the development.
Posted by Salem Breakfast on Bikes at 7:00 AM

I like the look. I have a comment about traffic projections. If they build it well and build a better bike network then the 10000 car trips don't have to happen.

The expansion at 25th and Madrona definitely does not need to happen. An appropriately sized traffic circle could allow smoothly flowing traffic. fix Pringle Creek and get better storm water management. Will Salem think outside of the box?

As for getting outside the box - I think the redevelopment at the State Hospital North Campus is the thing to watch, where it might be new enough that novelty and creativity are actually possibilities, even if still improbable.

(Also, inserted a walkscore graphic into the text for additional clarity.)

Seems consistent with most neighborhoods in Salem--charming, attractive, walkable and bikeable within the neighborhood. But if you actually try and go anywhere its stroad city.

On the trip generation. Madrona and Commercial? Really? It really seems that public works seizes on every opportunity it possibly can to add more car capacity but looks the other way when it comes to filling in sidewalks and bike lanes. Madrona is missing sidewalks between Pringle (Battle Creek) and Fairview Industrial.

This entire section of town is lacking in even basic services (like a grocery store). For comparison, Portland actually has set a planning goal that 90% of the population live within 1/2 mile of a grocery store by 2030.

I love the concept of 1/2 mile to a grocery store. I wonder how we can promote that in Salem. All of the land use planning processes are so disjointed and lacking in public input at the core that it seems very hard to influence anything innovative.

Eric Olsen's projects seem to be filling a nitch in Salem that harkens back to the early twentieth century. I hope it succeeds to hold true to his vision.

The grocery store issue is complicated, natch. I am working on a follow-up to the note on Safeways, and here's one progression of them out south:

Only the last one is open nowadays, and in general the previous one closed when the new one opened.

In nearly every place there's the erosion of neighborhood groceries and the trend towards bigger and more remote big box grocers.

If we magically restored all the neighborhood groceries in buildings that yet remain, we'd still have to figure out the travel/shopping culture changes that would ensure people used them so they would not only stay in business but would prosper.

Everybody knows this, but it's worth underlining: Simple proximity is not a sufficient condition, and several other variables are involved - including streets that make it easy to walk and bike and bus.

As for promoting it, I think Diana Dickey in her health educator capacity and coordinator of the County Community Health Improvement Partnership has talked some about food deserts and making it easier to use active transport for this kind of thing. That's one avenue. Another would be the EOA-HNA process. And at the neighborhood association level.

Maybe others will have more ideas.

The Planning Commission agenda with links to the Staff Report was just posted this afternoon.

Staff recommends approval; neither the neighborhood association nor neighbors in Pringle Creek Community have identified any major issues. So it looks uncontroversial and reasonable!