From a public relations standpoint, the timing of the photo contest sponsored by the Historic Landmarks Commission and just announced is a little interesting. With a highly contested demolition permit in the works, it's a little like one of those hashtag promotions that could go awry.

But either way, it's an excellent opportunity to remind the City and the Hospital that our historic buildings matter. 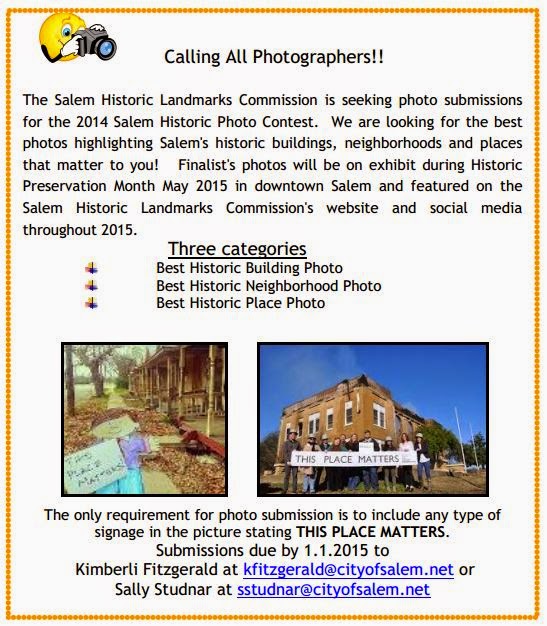 From the blurb in the Fall HLC newsletter:


The only requirement for photo submission is to include any type of signage in the picture stating THIS PLACE MATTERS.
Submissions due by 1.1.2015 to
Kimberli Fitzgerald at kfitzgerald@cityofsalem.net or
Sally Studnar at sstudnar@cityofsalem.net

You will think of other buildings and places to feature, of course, as this is an excellent hunting and sleuthing and walking opportunity - but why not make the center of the contest an expression of community advocacy as well! We just simply poop on a lot of places, and maybe something like this can go a little viral and reframe some of the conversation.

(And in this maybe a creative awryness is a side effect not entirely unanticipated or unwelcome.)

You can't really see it here, but in the calendar of the City's new November Community Connection newsletter, there's an image of Pringle Creek taken from the Liberty Street bridge, right at Waterplace with Salmon Run in the background, and it's mislabeled as Mill Creek.

Right across the street from City Hall!!!

City staff also need to get out and walk more so that they have the mental library of city places and can recognize when something's not quite right. Autoism makes us less likely to know and to value place.
Posted by Salem Breakfast on Bikes at 12:30 PM