You may remember in 2012 the debate over the third Fairview Refinement Plan for the Simpson Hills property. It took a while and many were not satisfied by the final outcome. 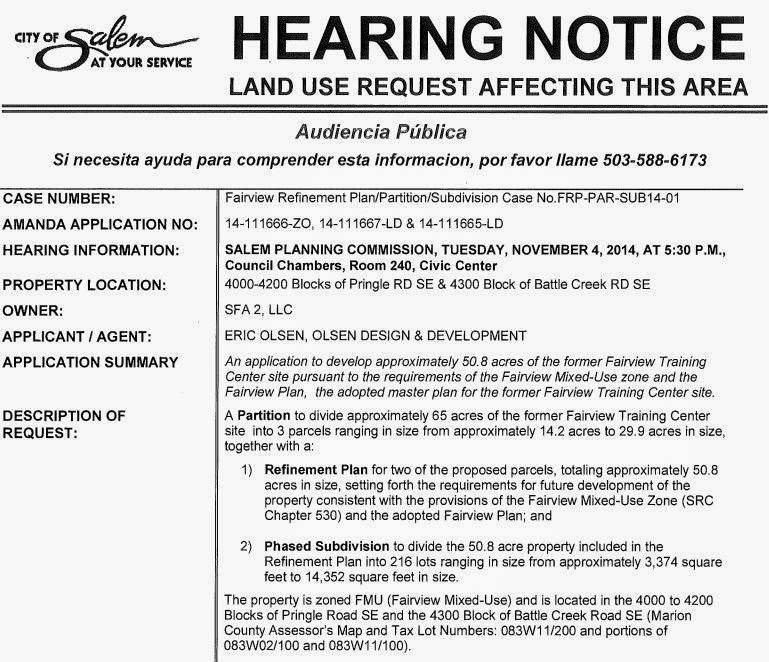 A Public Hearing has been set for the first pass at a fourth Refinement Plan, that of Eric Olsen's development just south of Leslie Middle School, and on the surface it looks a lot more sensitive to the Master Plan than the Simpson Hills plan ever was.

The City has set up a project site here, and there are several documents to review.  Here's the concept site plan. Note the alleys for car access and storage in the backs of houses.

Here's an earlier version of a site pan that shows where is the land in relation to the other parts of Fairview.

The recent demolition permits at Fairview were part of preparation for this plan. (See previous notes here.)

There will be more to say later this month and the City Staff Report should come out the last week of October.

The Hearing will be at the Planning Commission on Tuesday, November 4th at 5:30 p.m. in the Salem City Council Chambers.
Posted by Salem Breakfast on Bikes at 7:00 AM