Check out Paving Details for Court and State Streets Downtown

Thursday the City is hosting an open house on the repaving of Court and State streets downtown this summer.

Salem residents, business owners, and representatives are invited to attend an open house on the 2012 Downtown Street Resurfacing Project on Thursday, March 15, 2012, from 4-7 p.m. at the United Methodist Church, 600 State Street, Salem.

The 2012 Downtown Street Resurfacing Project is part of part of the Keep Salem Moving! Streets and Bridges Bond approved by Salem voters in 2008.

The 2012 Downtown Project includes the grinding and repaving of State Street and Court Street NE between Front Street NE on the west and 12th Street NE on the east, and constructing new curb ramps and curb extensions to meet Americans with Disabilities Act (ADA) requirements. The project is expected to begin in April 2012 and continue through November 2012. This work will be similar to the work that was completed during the 2010 and 2011 summer seasons in the downtown area.

Work to be completed during the daytime will include the necessary upgrades to bring all corners and ramps to current ADA standards. After completion of this work, nighttime work will include grinding the old pavement and resurfacing both Court Street NE and State Street with new pavement. The project will be coordinated with the July 20-22, 2012, Hoopla Basketball event.

City staff will be present at the open house to answer any questions about the proposed work and identify concerns and possible conflicts.

The City will begin publishing weekly updates when the construction period approaches. Attendees will be asked to provide contact information so they can be included in the distribution of these updates. Residents and business owners may also send contact information directly to the Project Manager and/or Public Information Officer at the email addresses listed above.

Here's a map from last fall with relevant details for people who walk and bike! 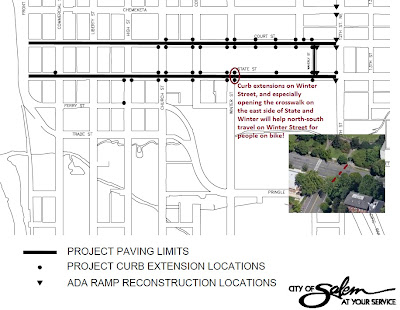 Especially welcome will be opening the east-side crosswalk on State and Winter. Hopefully the striping plan will work to obviate the risk of right-hooks here.
Posted by Salem Breakfast on Bikes at 7:00 AM

The safety issue with these streets is that they are overbuilt for the amount of traffic they carry. The unnecessary lanes reward speeding and induce excessive lane changes which creates more dangerous conditions for all users, including drivers.

The Seattle DOT has demonstrated that 2 travel lanes with a left turn lane can comfortably handle 25000 average daily trip (ADT). As you can see from Salem's traffic count data, these streets are nowhere near that capacity and three travel lanes are not only worthless.

More than 2 travel lanes on these streets makes no sense. Compare these to other streets in Salem with safer, more sensible design:

Pity that I will be out of town for the open house. This looks like another missed opportunity for the city to create safer streets.

Alas, you are right.

This is indeed a missed opportunity, but the City chose, not entirely unreasonably (though I certainly wish they would be more bold and more visionary), to defer major reconfiguration until after the Downtown Mobility Study.

But as in so many things, the engineering details and technical details of what is right and possible yield to political expedience. And no one of significance is willing to speak up for a road diet here. I think this is a clear situation where the messenger is more weighty than the message.

I'm working on that with Kidical Mass and SR2S. However...

Safety should never left to politics. Safety is the primary duty of government and a fundamental, non-negotiable element of the social contract.