A Preview of ODOT's New Public Art - and Why Not Bikes? 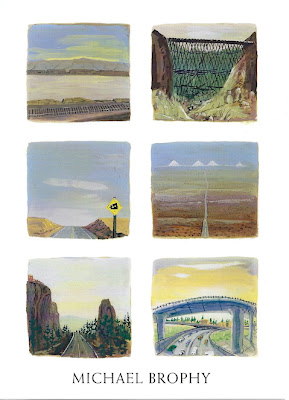 Over at On the Way, Bonnie Hull has a preview of new public art going in at the Transportation Building.

ODOT employees have been exiled from the 1951 T-Building for a year-and-a-half now while it undergoes some much needed renovation.

Finish work is apparently on the horizon, and soon some employees (not all, alas) will be able to move back into it.

Retired Art Professor Roger Hull is part of the group working on the 1% for art. You may recall the Environmental Art show at Hallie Ford from a couple of years ago. Michael Brophy is a favorite northwest landscape artist, and apparently he'll have several works in the new building!

Hull has notes on several of the other artists and locations for art, so head on over and check it out. She reproduces (top image) some of Brophy's gouaches similar to what will go in.

But with the North American Handmade Bicycle Show going on right now, it makes you wonder if the definitions couldn't be broadened just a pinch to include applied art. 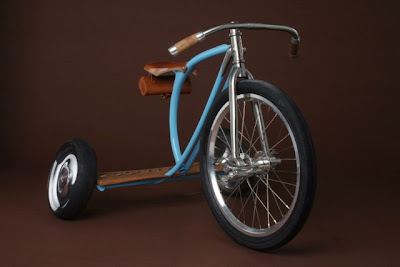 Sacha White's tricycle has been exhibited at the San Francisco Museum of Craft and Design and the New York Museum of Arts and Design.

Wouldn't it be nice to inspire the next generation of ODOT engineers and planners with some of the best in hand-built bicycles? Put the people back into mobility? Now that would be public art both useful and beautiful!

(Bikes roll easily, but heck, if museums can put them on display, surely they could be secured in a state office building.)
Posted by Salem Breakfast on Bikes at 9:00 AM

Email ThisBlogThis!Share to TwitterShare to FacebookShare to Pinterest
Labels: Advocacy, Art in Salem, Other Bike Fun