The Image of Biking: Types and how they Matter in the Popular Imagination 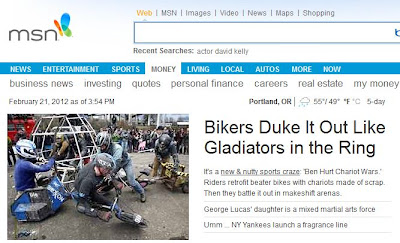 While it was great to see coverage for bike fun, it was also definitely about the freak-show side of bike culture. Oooh, look at those scruffy and exotic ruffians!

With Cactus League play starting yesterday, talk in baseball's spring training was also about bikes, and it was nice to see how "normal" it seemed there.

The story about Ben Hurt Chariot Wars stressed an ending by "adult supervision."

Looking like punk gladiators, teams of young adults on junk bikes pulling chariots made of junk parts frenetically chased each other around a makeshift arena, slamming each other and swinging away with foam clubs.

And then, toward sundown, the grown-ups arrived. Seven police cars pulled up and told all 400 or so people they had to leave because they were trespassing on railroad property. They complied. But the contest was over anyway.

As great as the creativity and bike fun is here, the narrative suggested bikes are for people who aren't ready to grow up (never mind that some of the participants are also highly educated professionals!).

Contrast this with coverage from the Mariners spring training camp.

Last year the Seattle Mariners themselves had two terrific underdog stories, not perhaps on the Linsanity level, but pitchers who had taken time off from baseball, and from out of nowhere made it to the major leagues.

Tom Wilhelmsen was a high draft pick several years ago. He burned out on baseball and tended bar for a couple of years. He decided to try to make a comeback, and come back he did!

His vehicle of choice? A bike. 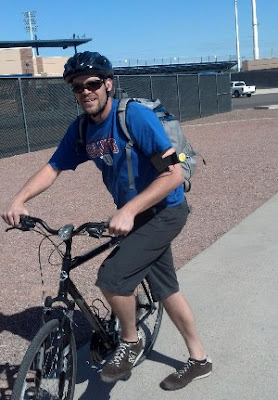 Here he is last month at the Peoria spring training complex. It was noted by the Mariners own PR, but no fuss was made.

Another of his teammates, Blake Beavan, incorporated rides with his girlfriend into his off-season training and conditioning regimen.

He also hopped on a bicycle once a week to ride a 20- to 25-mile route with his wife, Allison, whom he calls "Lance Armstrong." She is an avid distance cyclist and competed in the Hotter'N Hell Hundred last August, a 100-mile race in Texas.

"She didn't want to kill me," Beavan said. "Because I'm kind of a wimp compared to her when it comes to riding bikes. It's different, man. It doesn't matter how strong your legs are. My legs are really strong, but it's all about endurance and pacing yourself. Keeping a rhythm when you're riding. There's a lot that goes into it that I learned from her."

Beavan said it's the toughest training he's ever done — especially the uphill parts. He'd spend the entire week after that working out in the gym to recover and gear up for the next ride.

I really like these story-bits. There's no freak-show element: Even if riding a bike isn't for everyone, the tone of the press suggests it's a normal thing for these athletes to do. I also like it that Beavan, a competitive professional athlete, seems at ease talking about ways his girlfriend is better and stronger at something athletic.

These are guys in their mid- or early-twenties, and I hope they are signs of changing attitudes! 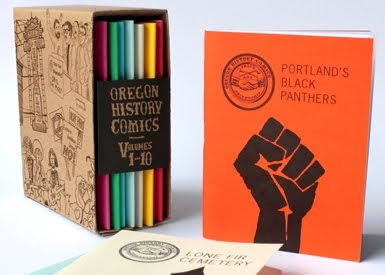 Another time attitudes changed was in the early 1900s. If you're going to be in Portland on Sunday, Sarah Mirk is holding a release party for the Oregon History Comics she wrote. She'll be at Powells at 7:30pm.

One of the comics, illustrated by Shawn Granton, is sort of bio-comic of bike dealer and Portland City Councilor Fred Merrill.

In the excerpt here, Merrill, interviewed by Stewart Holbrook (in the bow tie), at the end of his life remembers 1903 as the year the "fancy ladies'" use of bicycles turned off the society ladies and made bikes low-class and tainted with a whiff of brimstone and scandal. This was a significant tipping point in Portland: Bikes shifted from being high-status and popular fashion to being low-status transport for ordinary workers. (Class has always been part of the implied conversation about bicycling!)

For better or worse, bikes have always been as much a symbol as conveyance. The meaning of bicycling is important, and hopefully in the press the sign of the bike will become banal as bicycling goes mainstream. The Zoobomb bike carnival is great, and I think Salem could use a dash of it for seasoning, but it's sometimes too easy to latch onto the ways bicycling is weird, or daring, or otherwise exceptional. Sometimes it's nice for it just to be normal.
Posted by Salem Breakfast on Bikes at 9:00 AM

'"Phil Humber has a perfect game through eight," my editor said, asking whether I could get to the stadium for a story.

Well, I was only 1½ miles from the stadium but I was completely unprepared. I had no credential. I had no computer. I had no notebook and no pen. Much worse, I was 40 miles into a 60-mile bike ride and had no clothes beyond the sweaty black bike shorts, purple Husky bike jersey and bike shoes I was wearing.

But a perfect game is a perfect game, so I hopped on my bike and raced to the ballpark, hoping to catch the last inning. Being on a bike was actually a good thing because it allowed me to ride in the bike lanes past slow downtown traffic and through alleyways and side streets otherwise off-limits. Plus, with postgame traffic diversions outside the stadium already in effect, a car would have taken much longer.'

Jeremy Guthrie, who grew up in Ashland, also bikes! Unfortunately he crashed the other day:

'Guthrie routinely rides his bike to and from the ballpark, a practice he’s carried on for years. The odd injury occurred when his chain broke, slamming him to the ground near the ballpark. He might just miss two starts given the back date on the DL and the off day approaching.

“It was a kind of a freak accident. Most of the contact was on my elbow and it kind of jammed my shoulder. I just have some pain, and when that goes away. I would assume yes I will be healthy in 15 days,” Guthrie said after Friday’s game. “It wasn’t like wheel slipped out. I was just riding and the next thing I know I was on the ground.”'

Hopefully bike use won't be restricted as a sort of non-ordinary risk!