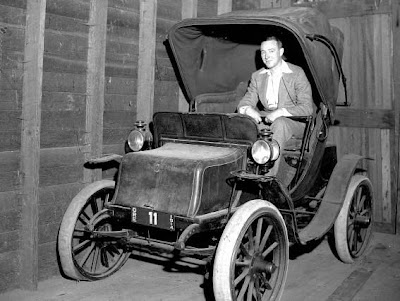 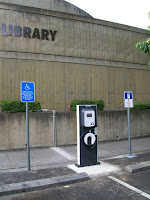 The rhetoric maps almost exactly to the ways we talked about the first cars and first highways a century ago, and this weekend offers a chance to learn more about the first attempt at electric cars.

The optimism for electric cars is palpable.

SALEM - Today, the Oregon Department of Transportation, along with charging station partner AeroVironment (NASDAQ: AVAV) and the Oregon Department of Energy, opened the first phase of the "West Coast Electric Highway." Eight charging station hubs with two outlets at each location are now available for public use. Two more will be installed soon north of Cottage Grove as part of this first phase. Together, these stations will provide EV owners access to a network of electric “refueling” spots along Interstate 5 in Oregon, paid for by American Recovery and Reinvestment Act funds through the Department of Energy.

“As the first state in the nation to establish an EV charging infrastructure along a major interstate, Oregon is leading the EV pathway and supporting adoption of the next phase in the evolution of transportation,” said Pat Egan, chair of the Oregon Transportation Commission and vice president of customer and community affairs for Pacific Power. “Once Oregon’s segment of the West Coast Electric Highway is completed, EV drivers will be able to travel from Ashland to Portland at a fraction of the cost of filling a gas tank and with no direct emissions.”

But how much is hype?

Bush House is holding a free open house on Saturday, and they'll have photos of Sally Bush's 1909 Baker Electric (pictured here in 1947).

Whether this round will be more successful than the first is not clear. The Chevy Volt temporarily halted production because demand was soft. The cars, frankly, are expensive, and it's not clear whether the entire lifecycle of a battery, with heavy metals and other toxic materials, is so much greener than a gasoline-powered car.

Here's an oddly steampunkish ad for the Nissan Leaf that seeks to make the electric car as shiny and new as the iPod - and glosses over emissions from coal-fired electricity. But it gets the history wrong: the battery's hardly newer than gas. 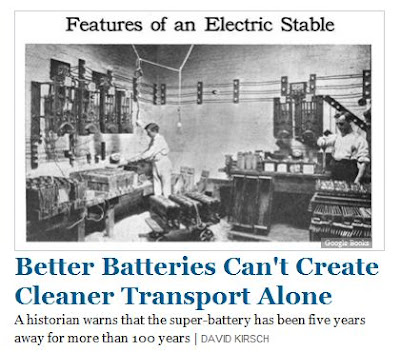 A while ago The Atlantic was doing a series on energy, which includes this piece on battery technology, as well as several others.

A good bit of the series is history, as a little over a century ago it was not yet clear that the gas engine would prevail over the battery.

The competition between electric, gasoline, and steam-powered horseless carriages was real. At the turn of the century each type of automobile had about a third of the market. We can be sure that proponents of each method of propulsion--not to mention the "lovers of horseﬂesh"--had frothy-mouthed adherents who would have left nasty comments all over the Internet had such a medium existed.

Many nineteenth-century heavyweights agreed that the electric car would win out, and the Philadelphia duo became a part of the most ambitious effort to create an integrated, nationwide, electric-powered transportation system that the world has ever seen.

An article in last year's Oregonian suggests that some things just haven't changed!

Oregon consumers, local experts say, haven't been beating the bushes to get their hands on a Nissan Leaf, the only mass-produced, all-electric vehicle currently on the market. Moreover, the vehicles have been slower to arrive than some anticipated.

And those public charging stations -- the plug-in infrastructure that will help wary consumers overcome the dreaded "range anxiety"?

Demand is slack. There were only "375 orders for Nissan Leafs in Oregon" last year. The Chevy Volt halted production. The cars are expensive, and their green gains over gas vehicles are at best incremental rather than revolutionary.

So we'll probably be seeing more attempts to whip the market for electric cars into a frothy meringue.

But don't forget about the good ol' bike! Now that's old technology worth having as new!

This is pure comedy gold! 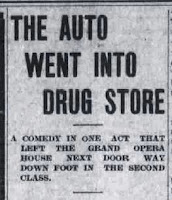 The Auto Went into Drug Store

Josh Billings said: "A monkey is an amusin' cuss because you never know what it will do next," and the same quality seems to apply to an automobile. This was exemplified last night about 8 o'clock when A. Bush, Jr., was giving his new electric runabout its trial trip, with Miss Sallie Bush accompanying him. Mr. Bush drove the machine west down Court street to High and turned, or started to turn south on that street. In some way the steering gear or the driver got tangled.

Anyway the machine swerved to the west again and headed for the front door of the Opera House drug store. The curbing is rather high at that point, and there was a bicycle leaning against the curb. The machine with great presence of mind, smashed the bicycle, probably for catching it off the sidewalk, climbed the curb as easily and gracefully as a lineman does a pole, and butted into the drug store like a Kansas man would in a dry town. The doors are but a few inches wider than the auto, but it was bent on business and went in without touching either side of the doorway. In the center of the room was a couple of show cases filled with perfumeries, soaps and toilet articles, and these it pushed over, smashing things generally, and, liking the particular kind of smell it was stirring up, it went on back to the prescription desk. This it knocked over and there was a tumbling of tinctures, powders, solutions, pills, potions and things chemical, vegetable, mineral and compound ranging from Opodeldoc to "Oh! be joyful!"

The prescription clerk, Mr. Borgett, saw the big head lights glaring at him like the fiery eyes of some hideous antediluvian monster, while it crashed towards him, and with the idea that the comet had arrived and had made its first appearance at the Grand Opera House, head, tall, horns and all; hi fled - fled incontinently not paying particular attention, as to where he went, so he reached somewhere else.

The auto, concluding it had gone into the drug business as far as it cared to, came to a halt with its nose over one of the most conglomerated mixtures over assembled behind a prescription case, and there it buzzed and purred like a kitten at a cream jug, and acted just as though it was proud of its first appearance. No one was hurt, and now that Mr. Borgett has his color back, a check that will be honored by Bush's bank will cure the evil effects of the auto's drug store habit. The old saying about a bull in a china shop doesn't begin to convey the idea of the effect of an auto in a drug store.