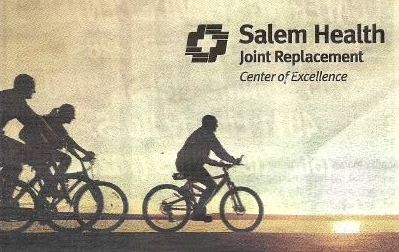 Earlier this month an ad appeared in the Statesman for the Joint Replacement group.

The idea, of course, is that after you get a new joint, you'll be able to bike and enjoy an active lifestyle.

Such are the tensions endemic to our healthcare system and operating a non-profit hospital.

On Monday with a very short agenda,* City Council will reappoint four and newly appoint one to the Hospital Facilities Authority. 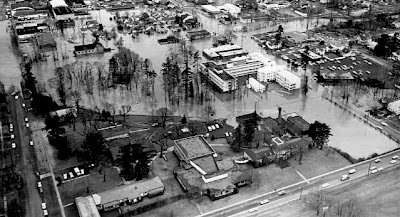 When you look at pictures of the 1964 flood (Salem Public Library Historic Photograph Collection), and think about our current smaller floods, it's easy to see why the hospital might be interested in the Blind School parcel.

In the lower left you can see the rise on which the Blind School sat, and in the center the depression between Pringle Creek and Shelton Ditch in which the hospital sits. (Mission Street is on the bottom, with Church and Winter running top-bottom.)

Salem's website has virtually no information on the board that makes up the Hospital Facilities Authority, but Medford's does on a similar one (is this a model for government transparency?).

The Hospital Facilities Authority of Medford is managed by a Board of Directors composed of seven members whose terms are four years. At least one Director must also be a member of the governing body. No member may serve more than two consecutive terms. Any vacancy on the Board of Directors is filled by appointment made by the City Council.

The Board acts as a conduit that allows non-profit hospital facilities to float tax-free bonds.

Presumably Salem's operates similarly. It seems to be a municipal courtesy and work-around for those tax-free bonds.

At least two of those on the board look to be members of what passes for "old money" in Salem, descendents of venerable families and institutions that pre-date Statehood.

When we talk about city inertia and the significance of messengers over the message, this is an example of the the deep and interlocking power structures in Salem with which those looking for change much come to grips. Figuring out ways to get these folks on our side and active would really make change possible!

* Did you get this far? Here's the big news!

Folks, we have a date!
Posted by Salem Breakfast on Bikes at 10:00 AM